The nationalist rally is now scheduled to take place Tuesday, two days after Israel’s parliament votes on the formation of a new government. Exact arrangements still have not been agreed upon. 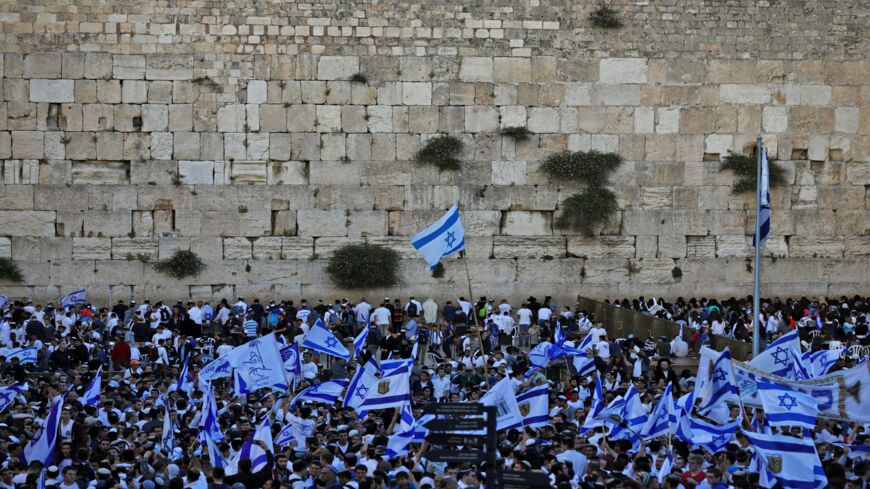 Israeli nationalist settlers wave their national flags at the Western Wall in Jerusalem's Old City on May 13, 2018, as they celebrate Jerusalem Day, an annual celebration of the "reunification" of the city following the 1967 Six-Day War. - MENAHEM KAHANA/AFP via Getty Images

The Israeli government has given the green light for a controversial protest in Jerusalem under certain conditions and only after the Knesset votes over the weekend on a new coalition government. The right-wing nationalist event had been scheduled and then canceled amid tensions between Jews and Arabs in the holy city.

In a press release, Israeli Prime Minister Benjamin Netanyahu’s Security Cabinet said the march — which at one point had been rescheduled for Thursday — will take place Tuesday “in a format to be agreed upon by the police and the organizers of the march.”

The flag march in Jerusalem was originally scheduled for May 10 but was cut short due to Hamas firing rockets at Jerusalem — the start of an 11-day war. The move to June 15 means the parade will take place after the Knesset votes to approve Israel’s new Cabinet on Sunday, two days before the new date for the march. This assuaged concerns that Netanyahu would use the march — if it were held this week — to derail the new government’s formation, according to The Times of Israel.

The flag march celebrates Jerusalem’s unification under Israeli authority during the 1967 Six-Day War. It is popular among right-wing and Jewish nationalist Israelis.

Whether the event will take place has been in question in recent days. On Saturday, Defense Minister Benny Gantz endorsed calling it off. On Sunday, police said they want the parade rerouted away from Old Jerusalem’s Muslim Quarter. On Monday, Israeli media reported the march had been canceled. On Tuesday, the Security Cabinet announced the new date.

Holding the flag march is a sensitive issue due to Jerusalem’s role in last month’s violence in Israel and the Palestinian territories. There were several protests by both Jews and Arabs in the city in April before the war broke out between Palestinian “resistance” groups in Gaza and Israel. Tensions over holy sites in Jerusalem and the possible eviction of Palestinian families from the Sheikh Jarrah neighborhood helped lead to the fighting, which also included unprecedented communal violence between Jews and Arabs in Israel.

The government statement saying the event still needs to be “agreed upon” indicates it is possible it could be called off again. The organizers still want to march through the Muslim Quarter, which police may not approve, according to The Times of Israel.