The controversial flag march in Jerusalem, organized annually by the Israeli right and religious Zionism, will not be held until after the new government is sworn in. 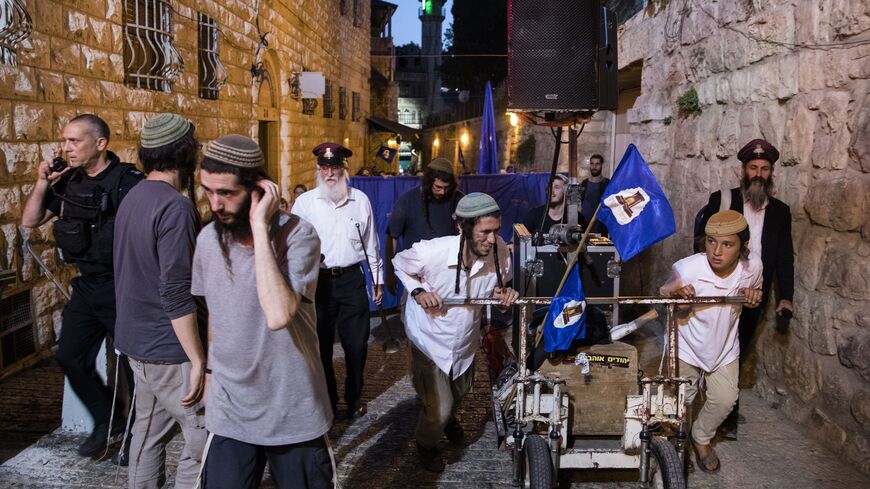 Religious Jews push a wagon with loudspeaker as they march in Jerusalem's Muslim Quarter during a prayer walk around the Temple Mount on June 9, 2021. Israeli police declined to permit a planned June 10 flag march by Jewish nationalists through the Muslim Quarter; now the march, whose final route is unknown, is to take place June 15. - Amir Levy/Getty Images

The controversial flag march in Jerusalem, originally scheduled for May 10, has been postponed until June 15, two days after the swearing in of the new government at the Knesset. The Security Cabinet announced June 8 that the parade would be permitted to take place in one week if police approve the route.

The annual march has been taking place for several years, marking Jerusalem Day, when the city was unified as a result of the 1967 Six-Day War. Organized by right-wing groups, the parade usually passes near the Damascus Gate and though the Old City. It is repeatedly a source of conflict with the Arab residents of Jerusalem, who consider the march a provocation.

Originally scheduled for May 10 this year, the march was canceled shortly after it started when Hamas rockets targeted Jerusalem. This marked the beginning of 11 days of conflict between Israel and Hamas and riots in mixed Jewish-Arab cities throughout Israel. After the cease-fire deal with Hamas, the organizers rescheduled the parade for June 10.

Still, for the past few days, Defense Minister Benny Gantz has been voicing his objection to the parade in principle, or at least to the provocative route through the Old City. On June 5, Gantz said he would demand the parade be called off if it “requires extraordinary security measures and endangers public order and diplomatic processes.” Senior police officers sided with Gantz. They said that to ensure the march passes by peacefully, without frictions between far-right activists and Muslim residents, thousands of police officers would need to be deployed. The officers said the police simply did not have such manpower at its disposal for the moment.

Senior politicians in the Labor and Meretz parties, who are members of the new coalition, warned of the potential negative consequences of a June 10 march. They said it was a deliberate attempt to thwart the formation of the so-called “change government,” conjecturing that Prime Minister Benjamin Netanyahu and Minister for Public Security Amir Ohana would like to provoke the Palestinians into reacting violently. Such a violent conflict could in turn have placed right-wing and left-wing members of the coalition at odds just before the swearing-in of the new government.

Following consultation with security agencies, police decided to allow the parade only if its route was changed to avoid passing through the Damascus Gate and the Muslim Quarter in the Old City. The march organizers then decided to cancel the event. Leader of the Religious Zionism party Bezalel Smotrich tweeted, "Islamic Jihad and Hamas try dictating to the State of Israel how to conduct itself in its own capital. Any attempts to thwart the flag march would be surrendering to terror threat and would be an indescribable shame that will show who really won the last round [in Gaza].’’ The organizers kept pushing for the original march to be approved.

While Netanyahu and Ohana sided with the organizers, Attorney General Avichai Mandelblit ruled that the final decision must be taken by the Security Cabinet. It convened for a special discussion, coming up with a compromise. As abovementioned, the event can go ahead “within a framework that will be agreed upon by police and organizers.” It is as yet unclear exactly what route will be approved. 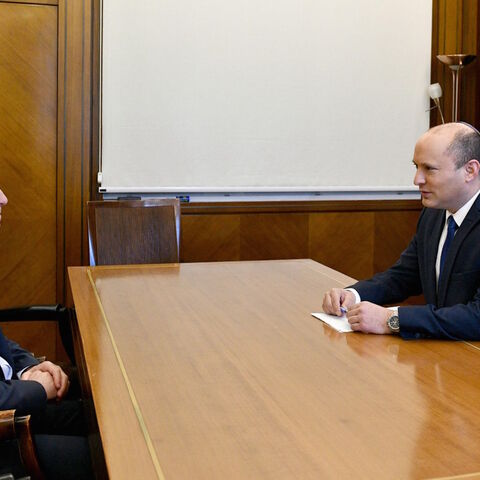