NGOs, businesses and even private citizens are speaking up in favor of coexistence and against tensions in Israel between Jews and Arabs. 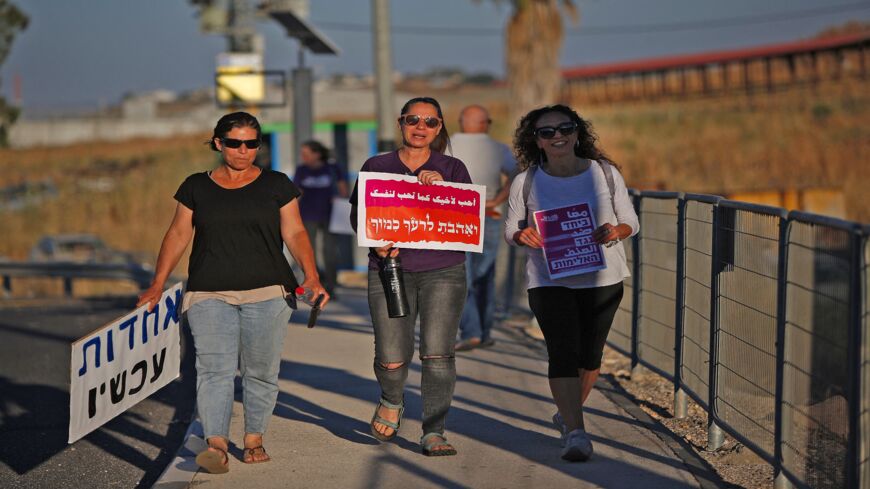 A woman (C) walks with a sign reading in Arabic (top) and Hebrew (bottom) a quote from the Torah's book of Leviticus, "Love your neighbor as yourself," as another (R) holds up one reading bilingually "Together against hate" and another (L) with a sign reading "Unity now," during a demonstration for coexistence between Jews and Arabs in the town of Rosh Pinna in northern Israel on May 13, 2021. - JALAA MAREY/AFP via Getty Images

Tensions in Jerusalem during last month's Sheikh Jarrah dispute and Operation Guardian of the Walls resulted in a new wave of violence between the Arab and Jewish citizens of Israel’s mixed cities. As the chaos escalated, police were unable to quell the violence, so the Shin Bet was called in to restore order. The consequences were dire. People lost their lives, and Israelis of every background were subjected to harsh images of destruction.

Nevertheless, there were people who still refused to throw up their hands in exasperation and accept the dismal situation as a given. They responded with initiatives all across the country, intended to stop the unraveling of the delicate fabric that is Jewish-Arab coexistence and rebuild trust between the sides.

In the midst of all these riots, for example, the Sheba Medical Center hosted a gathering of Jewish and Arab medical staff and patients, along with some others. The gathering ended with a performance of “A Song of Hope” by Miri Mesika. The event really did boost morale. The participants were moved by what they had seen. Something similar happened at the HaEmek Hospital in the country’s north. Dozens of staff members, both Arab and Jewish, who are used to working together on a daily basis organized themselves spontaneously to sing an anthem to peace.

Unable to ignore the situation, Arab and Jewish local leaders in the central Sharon region released an emergency statement calling on residents to maintain the spirit of coexistence. Together, they signed a document reminding their constituents that coexistence is “our present and our future. We call on you to stand vigilant in its defense.” They also released a video clip on social media in which they declared “We are not enemies!”

Amir Kochavi, the mayor of Hod HaSharon, was one of the local leaders who participated in this initiative. He told Al-Monitor, “Living side by side is a fact. Our communities work alongside each other in many different areas, and it would only benefit everyone if our living side by side and learning from one another intensified. As elected officials, we work to strengthen the positive mood in the region every day of the year. When confronted with the violence and rage that erupted — and which I condemn wholeheartedly — it was important to us as local leaders to throw our support behind the moderate majority and remind everyone that there is still a tomorrow.”

When asked about the public response to this initiative, he said, “The reactions were wonderful. It shows us that the vast majority of the public longs for the restoration of quiet and for further cooperation. We will not be deterred by those who want to disturb this delicate balance. There is a lot of work ahead of us to repair the damage, and this requires budgets, the rebuilding of trust and long-term investments, but that won’t happen if the leadership doesn't put this demand on the public agenda. That is exactly what we asked them to do.”

It is important to note that one of the first groups to raise the banner of reconciliation was Bank Leumi. They released an announcement in Hebrew and Arabic by chairman of the Bank Leumi Samer Haj Yehia (the first Arab to head a major bank in Israel) and general manager Hanan Friedman, calling for the restoration of calm: “This is the time to remember our moral compass, a compass that points to tolerance, consideration of the other, a spirit of giving and of peace.” Another organization, Omdim BeYahad (Standing Together) organized a series of events across the country under the banner “Let’s Stop This Together.”

What is particularly heartwarming, however, is that along with all of these initiatives by major organizations were private and local initiatives that emerged spontaneously in response to the tragic events. For example, Noga Dovrat of Kibbutz Meitar organized a demonstration with her friends at one of the major intersections in the Wadi Ara region. Their message was “We are neighbors in peace” and “We are all brothers and sisters.” In a conversation with Al-Monitor, she explained, “The group Neighbors in Peace, made up of Jews and Arabs, responded as soon as the riots began. We have been active in the Wadi Ara region for several years now, so we decided to demonstrate with signs in Hebrew and Arabic.”

Dr. Thabet Abu Rass, co-executive director of the Abraham Initiatives, told Al-Monitor about his group’s campaign to restore calm. “As the clashes reached their climax, television stations were inundated with violent images. We felt that it was important to provide the public with an alternative rooted in hope, so we launched a widespread campaign featuring Jews and Arabs standing beside each other in day-to-day situations. The headline was simple: ‘Together is the only way.’ In addition to posting the campaign on social media and news sites, it was broadcast by Keshet Channel 12, thanks to the very touching support for the project by the men and women of Keshet.”

A final thought for consideration. It is very possible the tragic events that rocked Israel’s mixed cities might cause people to wonder whether these really are mixed cities in which Jews and Arabs live together. Alternatively, could it be that they are home to two distinct populations that live beside each other but not together? There is no simple answer that can be summed up in just a few words or sentences. Unquestionably, the very idea of two populations living together in Israel is complicated. Maybe it is time to consider whether Israel’s local authorities would do well to break down the barriers between the two groups rather than help to reinforce them through legislations and statements by people in power, which only serve to deepen the rift.