With this year's Yom Kippur and Eid al-Adha falling on the same day, Jewish and Arab leaders are pleading with the two sides not to repeat past clashes and allow each other to observe the holy day peacefully. 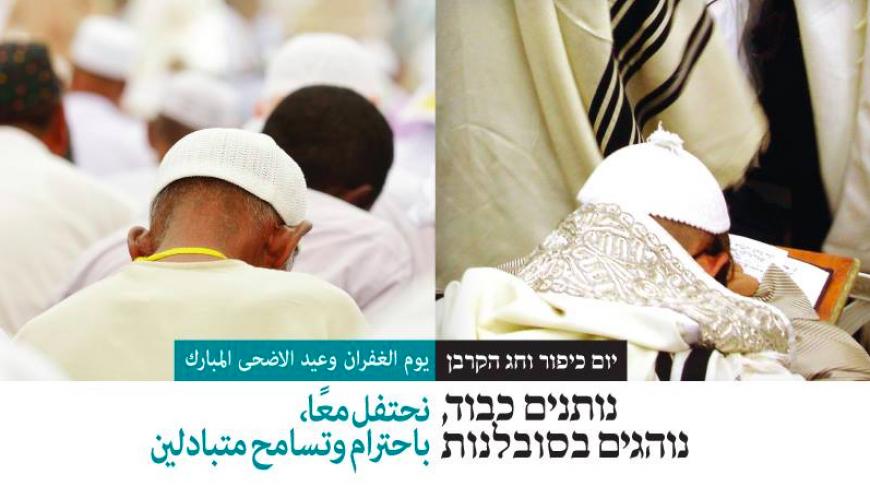 The newspapers are well prepared. Some warn of trouble to come; others run ads designed to prevent it. Many organizations, especially those devoted to promoting Jewish-Arab coexistence, have mobilized for the mission. All fear the highly sensitive encounter between the Jewish Day of Atonement, Yom Kippur, and the Muslim and Druze Feast of the Sacrifice, Eid al-Adha. Both fall on this coming Saturday, Oct. 4, and each is considered the holiest day of their respective faiths. While Jews fast and walk to the synagogue to ask for forgiveness and atone for their sins, Muslims and Druze mark the day by eating, singing and dancing.

Many fear that these displays of religious fervor will deteriorate into an emotional and explosive encounter between Jewish worshipers and Muslim celebrants. The ads published in the media virtually beg believers to conduct themselves with restraint and tolerance. A major ad by the New Israel Fund, the Abraham Fund Initiatives and the Friedrich-Ebert-Stiftung foundation read, “We call on the Jewish public to recognize the needs of those of the Muslim faith to perform the rites of their holy day. We call on the Muslim public to celebrate with sensitivity and consideration of the Jewish public. This day could be an exemplary model of coexistence, tolerance and mutual respect.” The ad ran in Hebrew and Arabic.

While Jews fast and suffer to atone for their daily sins with prayers, totally abstaining from activities, Muslims celebrate Eid al-Adha to mark the sacrificing of Isaac by his father, our patriarch Abraham. Asceticism and suffering will contrast with a hedonistic celebration of food and music. Often, in certain towns and villages, everything takes place in close proximity. On Sept. 27, the veteran Israeli-Arab journalist Zoher Bahalul issued a plea to believers among both peoples to control themselves during the sensitive encounter between their two holidays. Bahalul appealed to believers in Haaretz, “The egos, animosity and exclusion must be set aside to enable reason to prevail on both sides,” He added that, for instance, Arabs could hold “low-key celebrations and celebrate within their neighborhoods, avoiding flashy driving.”

Bahalul was referring to the violent incident between Jews and Muslims on the eve of Yom Kippur in 2008. Late that evening, after Jewish worshipers returned to their homes to sleep ahead of the following day’s prayers, Acre resident Tawfiq Jamal made his way to his home in the Wolfson neighborhood. He drove past residential buildings as he did every night. The neighborhood had become mixed, with Jews and Arabs living peacefully and even amicably side by side, sometimes across the hall from each other. Perhaps out of carelessness and perhaps deliberately, Jamal turned up the volume on his car radio so far that it shook the neighborhood. Loud Arab music on the evening of Yom Kippur — the Jewish residents were shocked at this flagrant sacrilege. Some burst out of their homes and attacked the young Arab. They beat him until he managed to flee for his life. He told his friends what had happened and shortly thereafter, toward midnight, hundreds of Arab youths showed up in the neighborhood and torched cars. Within minutes, a riot erupted in the neighborhood and spread to others in Acre.

Jews and Arabs found themselves engaged in a violent clash on this holiest night for Jews. Acre resembled a battlefield. Stores were looted, cars were torched and black smoke rose above the city. Abbas Zakour, an Acre resident who served at the time as a member of the Knesset, rushed out of his house to try to impose calm. He was greeted by horrific scenes.

“I couldn’t believe my eyes,” he told Al-Monitor this week, blaming the Jews for losing control. “We in this city live in coexistence,” he added, “and just a few days before your holiday, we had finished our Ramadan fast, during which Jews ate and drank freely. I had expected them to respect us just as we respect them.”

Calm was only restored on the day after the Kippur fast. Both parties claimed justice was on their side. Jamal recounted that he had raised the volume of the Arab music on his car radio because he had forgotten it was Yom Kippur, while the Jewish residents of the neighborhood were convinced he had deliberately violated the sanctity of their holiday.

Armed with past experience, the police prepared this year for any possibility, declaring a state of alert and announcing that hundreds of officers would be sent to patrol mixed towns. The potential flashpoints are Acre, Ramle, Lod and Jaffa — towns in which the scars of the last war between Israel and Hamas are still evident. Arab residents of those towns held demonstrations in support of the Palestinians in Gaza. They expressed solidarity with them and even sent them food packages and medicine during the fighting. These acts of solidarity contributed to feelings of alienation among the Jewish residents, who regarded them as damaging to the delicate fabric of coexistence with their Arab neighbors.

The police aren't the only ones on high alert. On Oct. 1, Jewish and Muslim clerics appealed to their flocks to display restraint and positivity toward each other on their respective holidays. Chief Sephardic Rabbi Yitzhak Yosef issued a call against any manifestation of zealotry on the part of Jews and Arabs and for the mutual respect of each others’ holiday. Muslim clerics issued similar appeals.

It remains to be seen whether Jews and Arabs will display the necessary maturity for each side to observe its holy day while showing consideration for the other. If so, such conduct will be a sign that the tensions amassed during the war in Gaza this past summer are gradually dissipating.