Can Israel, Palestine exist as parallel states on same land?

Contrary to what politicians on both sides are willing to admit, the Israeli and Palestinian people can live together side by side, and might accept an idea of having two parallel, “overlapping” states established on the same land. 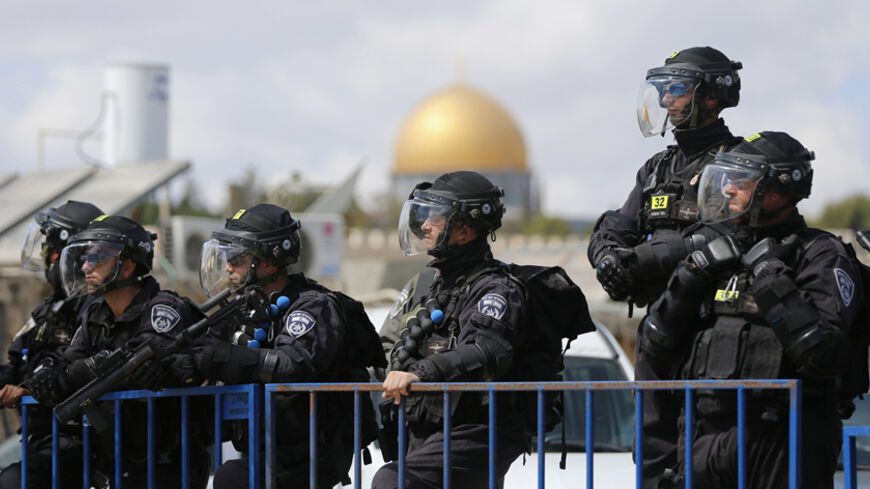 The Dome of the Rock is seen in the background as Israeli policemen stand guard before Palestinian men begin to pray in the Arab East Jerusalem neighborhood of Ras al-Amud, Sept. 26, 2014. - REUTERS/Ammar Awad

The recent Yom Kippur passed peacefully, without any violent incidents between Jews and Arabs in Israel. I would not bother to mention it had it not been for the massive police forces deployed in advance in an attempt to prevent clashes between Jews and Muslims in the so-called mixed cities, and for the intensive efforts to mobilize the leaders on both sides in advance, to prevent friction and conflicts.

Yom Kippur, the Day of Atonement, a day of fasting, abstinence and prayer, the holiest of all Jewish holidays, was celebrated this year on the same day, Oct. 4, as the first day of Eid al-Adha, the Feast of the Sacrifice, the most important of all Muslim holidays. While Jews were fasting to atone for their sins, praying to God to write them in the Book of Life, Muslims were commemorating the willingness of Abraham, the shared father of Muslims and Jews, to sacrifice his son to God. The Muslim holiday is marked by a sumptuous feast, with grilled or roast meat as the main serving, in remembrance of the ram sacrificed as a burnt offering.

And when Jews are fasting to plead with their God, while Muslims indulge in a lavish feast to please their God in such a close interval of time, it's an almost sure recipe for a flare-up, all the more so just a few weeks after the conflict in Gaza.

As it turns out, however, the gloomy predictions have proven wrong. Indeed, it could be that this specific test, successfully passed in the mixed cities of Acre, Haifa, Ramle, Lod, Jaffa and even Jerusalem, shows that Israeli Jews and Palestinians who share this land are far more prone to compromise than their leaders.

On Oct. 9 Ben Caspit wrote about the stalemate in the talks between Israelis and Palestinians, which has prompted certain circles in both the Israeli right and left to discard the two-state solution and seriously consider a one-state solution. However, as US Secretary of State John Kerry has warned, a single state established in the vision of the Israeli right is bound to be an apartheid state. On the other hand, a state of all its citizens, as envisioned by the left, would grow to be a state with a Jewish minority, and this would inevitably mean the end of Zionism.

Scandinavian countries, it seems, have become a fertile land for creative thinking on the possible resolution of the Israeli-Palestinian conflict. An innovative idea suggested by a team of Israeli and Palestinian intellectuals and supported by the Swedish academia, constitutes a perceptual and cognitive turnaround aimed at formulating a solution to the situation. And it may well be that this is precisely what it takes to get out of the impasse the diplomatic process has reached.

According to the idea they propose, instead of dividing the land into two states, two states will share the same land. Israel and Palestine — two parallel, “overlapping” states, established on the territory extending from the Jordan River to the Mediterranean Sea.

This team of intellectuals, assisted by American and Swedish experts, convened at the Lund University in Sweden to think outside the box and work out a novel, groundbreaking solution to the century-old conflict. The detailed plan they formulated over several years was recently published in a book titled “One Land, Two States — Israel and Palestine as Parallel States.”

The main and most significant novelty of the idea of parallel states is that it neutralizes the explosive issue of land weighing on the negotiations to end the conflict. It is, in fact, a “magic solution” under which the Palestinians would be allowed to maintain a sovereign independent state over all parts of the former British Mandate of Palestine, while Israeli Jews would be able to control and live in a country of their own, extending over the whole land of Israel. It's an idea that proposes an end to the occupation and free movement throughout the country for both peoples.

How do they propose to do it? Instead of a geographically based division of governmental authority, jurisdiction would be determined by a citizen's nationality, regardless of his place of residence within the boundaries of the parallel states. There would be no territorial border between Israel and Palestine, and both will share the whole territory. The two states alike would have legal authority over the entire country, while local municipalities would be identified as Palestinian or Israeli by a democratic decision of their citizens.

The two states would be able to preserve their national symbols. Each would have its own head of state, its own parliament and government, and its own sovereign foreign policy and independent diplomatic representation. The external common border shared by the two states would be managed by agreement. Each resident of the country would be free to choose his affiliation for himself, no matter what his place of residence. Jerusalem would be the capital of both states at one and the same time. As to the right of return, they propose to solve it in stages. And the same holds true to the security requirements, which would call for innovative thinking.

The conceivers of the idea are well aware that it poses numerous challenges in a series of areas. In the 254 pages of the book, they spell out their vision of a mechanism for a common economic policy and highlight the need for a shared system of legislation in place of the current one. They point out that some of these proposals have already been implemented. Thus, for instance, the legislative system in Israel actually consists of two parallel systems: The generally applicable body of national laws, which is in force side by side with the separate systems of religious laws applicable to each of the religious communities in the country. The security cooperation between Israel and the Palestinian Authority (PA), which, notably, has proven effective in the West Bank areas under PA control in these stormy times of all times, is another precedent that can be relied upon. Foreign consular missions maintain corresponding consular offices in Tel Aviv and Jerusalem for Israelis and Palestinians, respectively. Under the proposed format, each foreign country will appoint to Jerusalem two ambassadors — one ambassador to Israel and another one to Palestine.

True, this proposal does seem far-fetched. Nevertheless, signs of change, both conceptual and strategic, can already be seen in the local arena, which may yet turn it into a plausible and feasible plan.

In view of the required change in Israel's national security concept and given the strategic threat posed by the progress of the Islamic State in the east and the dissolution of Iraq and Syria, Israeli Prime Minister Benjamin Netanyahu has updated his stance on an arrangement with the Palestinians, accordingly: “Palestinian political and economic control in the territory governed by them, in parallel to Israeli security activity on the ground in accordance with the operational requirements to ensure that the territory is free of terrorist elements.” In that speech, delivered by the premier at the Institute for National Security Studies shortly before the latest conflict with Hamas in Gaza (June 29), Netanyahu said, “In any future settlement with the Palestinians, Israel will have to maintain long-term security control of the territory along the Jordan River.”

At the Davos conference last January, a senior official representing the Netanyahu’s office said, “The prime minister believes that in peace, just as Israel has an Arab minority, there is no logical reason why the Palestinian state could not contain a Jewish minority and that Jews living in Judea and Samaria would be given the option to stay.”

Israel’s Channel 2 News correspondent Udi Segal subsequently reported on a staff work commissioned by Netanyahu to examine the governmental arrangements in the Baarle-Nassau and Baarle-Hertog communities on the Belgian-Dutch border, jointly run by the two governments — which constitute “parallel states” in miniature.

The peaceful way the Day of Atonement was celebrated, concurrently with Eid al-Adha, only goes to show that, contrary to what politicians on both sides are willing to admit, the two peoples can live together side by side, respecting each other and acknowledging the mutual needs of each side.

On the face of it, the idea of parallel states may seem a hallucinatory fantasy, a waking dream, or a sheer utopia. But come to think of it, aren’t these the very words originally used to disdainfully label the Zionist vision of Theodor Herzl, founder of modern political Zionism in the early 1900s?