Jews and Arabs together are battling Israeli authorities to save their fragile organic olive grove from electrical lines planned to pass over their lands to avoid military training zones. 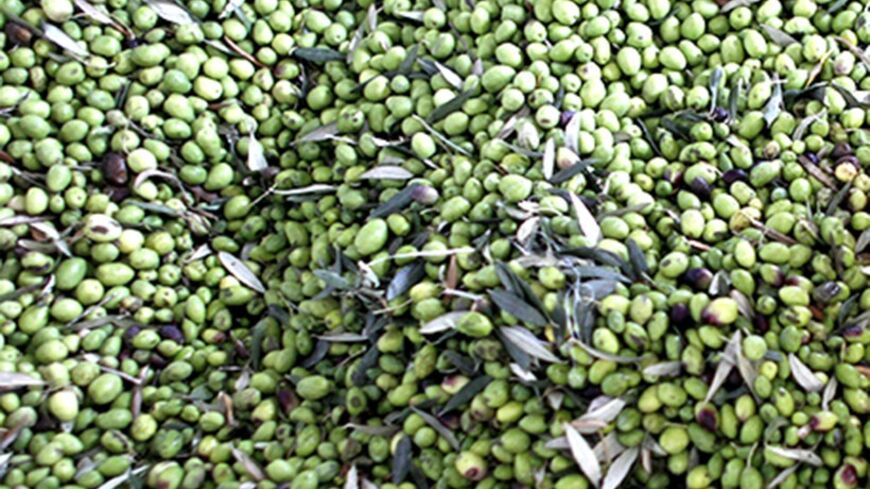 Freshly harvested olives are poured into a machine at an olive press in Idna, near Hebron, Oct. 14, 2012. - REUTERS/Ammar Awad

Thousands of tiny, hard, unripe green olives are hiding between the slender leaves of the olive trees in the joint Jewish-Arab “Oasis” grove in the Wadi Ara region. In 2014, four years after it was first planted, the orchard is expected to produce enough fruit to manufacture organic olive oil. With a little luck, it will enjoy the same success as another, similar orchard, known as the “Scottish Grove,” in the Jezreel Valley. That one was planted in late 2011, but the Jezreel Valley is blessed with good soil, while the land in Wadi Ara is harsh and unyielding. That is why the younger grove is already producing a crop while Oasis is still struggling.

Both orchards are agricultural projects operated by the nongovernmental organization Sindyanna of the Galilee Fair Trade Association. The group was created in 1996 with the goal of “promoting economic opportunities and places of employment for Arab women, while maintaining a commitment to the values of peace, equality and the welfare of everyone.” The group hopes that the oil from Wadi Ara will win international prizes, just like its younger Jezreel Valley counterpart, which has also been named Israel’s best boutique oil producer for two years running.

The Oasis olive grove is considered something of a miracle in modern Israel. Hundreds of Jewish and Arab volunteers work there every year. The grove itself lies in the "roha" (ghost) lands of Wadi Ara, which have not been cultivated since 1948 and serve as a military firing range. As a result of the Roha Agreements of 2000, the Israel Defense Forces (IDF) returned about 11,000 dunams (2,700 acres) to the land owners. These owners went on to found in cooperation with the Sindyanna Association the Al-Juzur group, an ambitious coexistence project on 100 dunams (25 acres) of the returned lands: a modern, organic olive grove.

According to Hadas Lahav, CEO of Sindyanna, a bulldozer was brought in to remove thousands of tons of rocks, because the ground could not be broken up with spades. Another member of the association added that an expensive water pump was also brought in to subdue the harsh conditions in the area.

“Look at the neighboring grove, which isn’t irrigated,” he said, pointing north to a collection of stunted olive trees. The difference between them and the trees in the organic grove is obvious, he said, “and that is why the cost of creating this grove was 12.5 times more than a normal orchard, about 1.5 million shekels [almost $500,000].”

But now the Oasis project is threatened by a plan by the electric company to run power lines through the grove, requiring a passageway 70 meters (230 feet) wide. According to Sindyanna, the project will result in the loss of 35% of the grove’s total area, as well as another 1,000 dunams (247 acres) of the 11,000 dunams of "roha" land surrounding it. They also fear the devaluation of the land (by about 38%, according to their assessor) and harmful radiation from the power lines.

The members of the association also claim that there was another, better plan, in which the power lines would run over uncultivated state lands, but the IDF opposed it, because the land in question serves as a military training zone. And so, as a result of this opposition from the defense establishment, the power lines were resituated on privately owned, cultivated land — the Oasis grove.

Nabil Yunes, who is in charge of day-to-day maintenance in the orchard, claims that it was easier for the electric company to get the Arab residents of the region to give up their land than it would have been to get the big and powerful IDF to give up its own, saying, “The first plan would have been much cheaper for the electric company, and I’m sure they didn’t want to pay more money, but it surrendered to the IDF anyway because we are the weaker party.”

Responding to Al-Monitor, an IDF spokesman claimed, “The power lines proposed for the project entered the IDF’s training grounds, presenting a security risk and posing significant damage to its ability to continue training properly in an extensive swathe of land. The security establishment will reassess every route presented to it by the electric company, to ensure that they are in accordance with the security interests of the region.”

The electric company responded, “The planning process included a detailed overview of alternatives, and examined a large number of them. Of these, the National Building and Planning Council chose the option where the plan was finally set. The route was moved from the biosphere in the Ramot Menashe hills and the zone slotted for residential development of the Wadi Ara localities. There is no reason, in terms of either security or the environment, why the lines cannot pass over olive trees, even if they are part of an organic grove. There are many places throughout the country in which electric lines pass over orchards and agricultural lands. The poles will be situated every several hundred meters, upon consultation with the owners of the land, so as to avoid cutting down olive trees insofar as possible, or in other words, where there are paths or lands that are not being used.”

On May 9, a few dozen Jews and Arabs gathered in the Oasis grove to protest the plan. They were determined, but did not get carried away. For the most part, they were simply disappointed, first and foremost with the state, but also with young local Arabs who didn’t attend the demonstration. Maybe that generation has already given up hope, they thought.

According to Lahav, the local residents are actually lucky that the organic grove lies in the power lines’ route. She said, “Without that orchard, no one would even take them into consideration. It is easy to ignore them. They are transparent.” She says that it is much harder to ignore the project now, because Jews are also involved in it. And so, this isolated island of almost surreal coexistence could help change the entire region.

Then Modir Yunes, chairman of the Ar’ara Local Council, got up to speak. He spoke sofly, but his words were harsh. He pointed to other development projects in the area such as the expansion of Highway 65, which involved the confiscation of 30 meters (100 feet) of land on each side of the road and altered the landscape. The Arabs feel that this was done intentionally, for the sole reason of showing the local residents who’s the boss in the area.

“It’s a feeling of being robbed,” said Nabil Yunes.

But Modir Yunes was optimistic. “We can live together,” he said. “Hope will emerge from here and do away with the mutual distrust between our young people and the young Jews.”