Can a new project keep Sinai orchards in bloom?

The history of the orchards in the High Mountains of South Sinai runs deep, but new generations appear increasingly reluctant to continue the tradition. A new initiative to preserve the heritage and tradition of the groves and gardens might help change their minds. 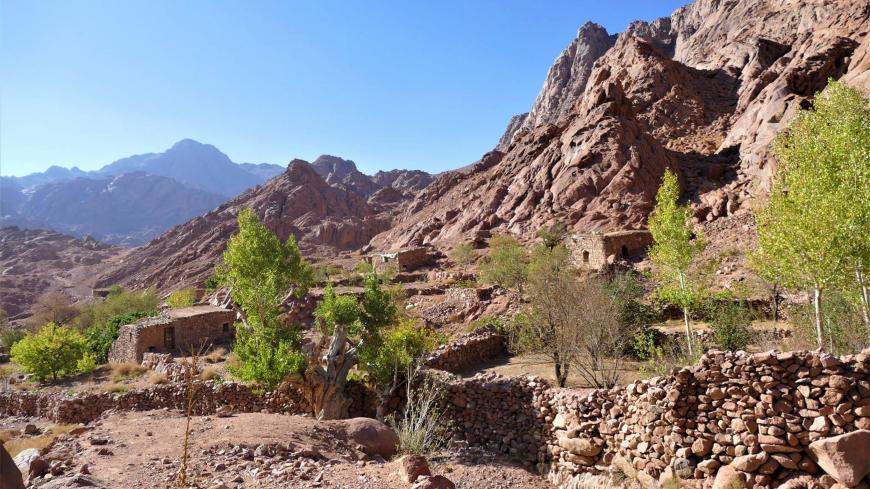 A Bedouin orchard is shown thriving at high altitude in the Sinai Peninsula, Egypt, in a picture uploaded Aug. 31, 2018. - Facebook/Zahra Magdi

Ramadan Abu Sayed's life has revolved around orchards since birth. The Bedouin from the Jabaleya tribe was born sixty some years ago in Wadi al-Arbain, a valley close to Saint Catherine, in South Sinai. His grandfather had moved there from a nearby valley, and it was in his new home that the family tradition of gardening took root.

The Monastery of the Forty Martyrs, or in Arabic Deir al-Arbain, has stood in the valley for centuries, and in modern times the Abu Sayed family has worked in the olive tree groves surrounding it. Abu Sayed's father, after spending most of his life in the orchards, decided to try his luck and cultivate his own garden, not far from the monastery.

“My father started [his orchard] around 1973, after he found a way to collect water,” Abu Sayed told Al-Monitor. “Back then it was a very small garden, with three grape vines, one almond [tree] and a few figs trees.”

Ramadan Abu Sayed inherited the orchard in 1980, and since that time, has focused on its expansion. He fears, however, that none of his sons will carry on the family tradition because they will be forced to move in search of better-paying jobs.

“When they get married, they move far from the gardens,” he said. “I still have four kids who live with me, and although I hope they stay, I know they will one day leave.”

The orchards in the High Mountains of South Sinai have a long history. Adherents of the Abrahamic religions believe that Moses received the Ten Commandments from God on Mount Sinai. Consequently, dozens of monastic settlements popped up in the region beginning in the 4th century, during the early Byzantine era. Their specific locations were not determined by anything holy, but by access to water and fertile land, that is, agricultural potential. This set of circumstances is usually found in valleys.

Thus, more than 400 orchards came to flourish across the region, watered by a combination of modern technologies and ancient irrigation techniques that in some cases included precarious dams and pools filled primarily by local springs and wells. Residents grew products ranging from olives to fruits and vegetables and nuts.

The modern orchard tradition in the region carried on by Bedouins today is based on the extensive gardens developed in Byzantine times. It is sometimes difficult to discern whether a garden is modern or ancient.

Joseph J. Hobbes explains in his book “Mt. Sinai” that during the second half of the 20th century, the art of gardening declined, gradually being replaced by wage labor and no longer practiced by the increasing numbers of Bedouin opting for a sedentary lifestyle and therefore settling in urban centers. Inevitably, these transformations accelerated the abandonment of traditional mountain agriculture, jeopardizing the future and the legacy of the region's gardens. Today, it is estimated that only around 10% of the ancient orchards continue to be cultivated.

In an attempt to reverse this trend, a new local initiative, called Mountain Rose, is trying to create fresh opportunities for the ancient orchards through modern products, with an underlying goal of sustaining gardens and their heritage, which is so intimately tied to the history of the Jabaleya tribe.

The project, conceived by Zahra Magdi, a botany and chemistry graduate from Mansoura University, takes advantage of the growing demand for organic food and of tourism in the Sinai, which mostly revolves around hiking. Magdi, who lives in Saint Catherine, seized upon the idea of tapping into this niche market by offering dried food, such as trail mix, made from orchard products.

“Here you find all the resources. There are the fruits, the nuts, the organic orchards and the people who can work them, so everything is here,” Magdi explained to Al-Monitor. “We just needed to market this in a new way.”

Following trial runs in 2017, Magdi collected around a ton of dried fruits and nuts from a dozen gardens in 2018. She expects to engage 20 gardens and to triple production this year.

The focus on dried fruits and nuts, instead of fresh products, requires that orchard owners spend more time in their gardens than they might otherwise. The more time spent there, the theory goes, the greater the personal investment and attachment. Magdi remarked, “Taking care of the gardens and drying the fruit mean that they need to stay in the orchards to work, otherwise people just leave the fruit in the garden and go visit every few days.”

As part of the initiative, Magdi also hopes to boost the role of women in the orchards. According to her, women spend more time there than men do in the orchards and therefore have more opportunities to generate income.

Such is the case of Um Soliman, a Bedouin from Saint Catherine. Her father started a garden some 50 years ago a few minutes’ walk from the city center. Um Soliman and her sisters worked in the garden when they were young. Nine years ago, her father passed away, and Um Soliman and her mother continued to take care of the plot. Now, due to her mother’s advanced age, Um Soliman takes care of it alone.

Um Soliman told Al-Monitor that her work is easier than it used to be, primarily because she has electricity and consistent access to water. In addition, fruit production, mostly apples, appricots and figs, has been increasing as Um Soliman's trees age. Despite this, she is concerned the garden will fall into disuse after she is gone.

“I am scared that nobody will take care of the garden [in the future], although the son of my sister is young and likes gardening,” Um Soliman told Al-Monitor. “I like the project because I want the gardens to be popular.”

Sayed Mousa, a Bedouin from Saint Catherine, owns three gardens that he long considered to be of little use. Next growing season, however, his orchards will be among those working with Magdi for the first time. These days Sayed sees the gardens as an opportunity to keep a tradition alive that, in his case, dates to his grandfather’s generation.

Also as part of the initiative to revitalize and preserve the heritage of South Sinai flora, Magdi has recently undertaken a number of trips through the region to visit different Bedouin tribes and learn about the different plants that grow in their area and how they use them. Local Bedouins have traditionally used wild plants for dietary, medicinal and hygienic purposes as well as for earning extra income. So far, Magdi has visited the Jabaleya, Awlad Said, Garasha, Hamada and Alegat tribes, and she expects to begin promoting some of their products and spreading information about them.

“They have knowledge [of the flora], and they have the natural resources,” said Magdi. “People around Egypt need to know more about these places not only as hiking areas, but also through their products, which are part of their culture and tradition.”