Since the outbreak of the coronavirus pandemic, the Bedouin community in Egypt, mainly in southern Sinai, that heavily relied on tourism to make ends meet, is retreating deep into the mountains and the desert to live a more traditional life. 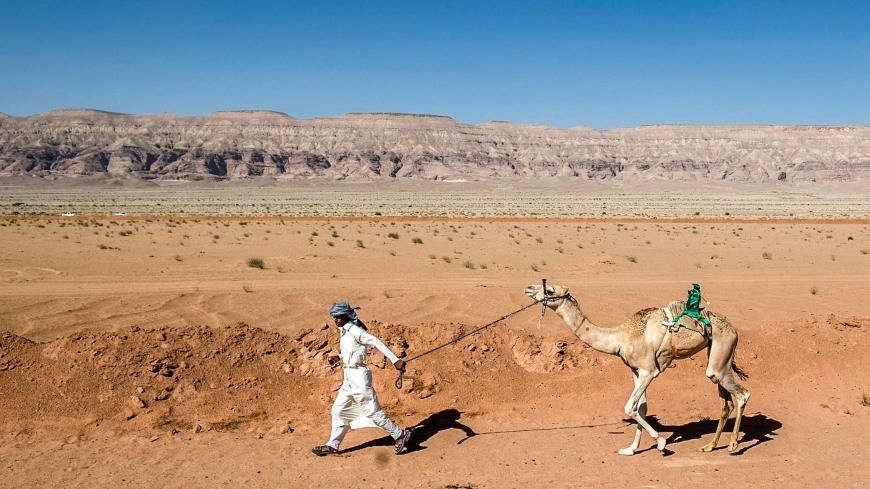 A Bedouin man runs with his camel as he prepares it to take part in a race in Egypt's southern Sinai desert, after more than six months of hiatus due to the coronavirus outbreak, Sept. 12, 2020. - KHALED DESOUKI/AFP via Getty Images

A correspondent in Egypt
October 2, 2020

Salem Ramadan Musa, a 33-year-old Bedouin from the Jebeliya tribe, used to make a living for years working as a mountain guide for hikers who came to the town of Saint Catherine, in the southern Sinai Peninsula, an area renowned for its trekking routes.

Then, the coronavirus pandemic made a rather intrusive entrance into his world.

With tourists staying away from Egypt and given the economic distress that was put on Musa and his family due to the lack of hiking trips, they decided in mid-May to move to an ancient orchard that belonged to his father in a valley deep into the high mountains of southern Sinai. When they arrived, they fixed the wall surrounding the site and an old well, built a hut to settle and dug a second well. And by taking advantage of the favorable weather and the large amount of water available in the region this year, they started to grow green beans, tomatoes, peppers, aubergines, arugula and corn in order to sustain themselves during this crisis.

“I am happy because I went back to the old lifestyle,” Musa told Al-Monitor.

His family is not alone. Since the outbreak of the pandemic, there has been a large-scale movement of Bedouins retreating deep into the mountains and the desert to live a more traditional life both in southern Sinai and the Red Sea mountains, outside of the tourist city of Hurghada.

The two main factors that drove this retreat, which has involved at least hundreds of Bedouins, include the collapse of tourism and the search for safer places than towns to stay amid a pandemic.

“A lot of the time it is not visible because desert people are pretty much invisible in every sense: We don’t see them because they are in the desert, and we don’t hear them because there aren’t many channels to communicate or get information [from them],” said Ben Hoffler, co-founder of the Sinai Trail and the Red Sea Mountain Trail and who is closely connected to locals in both regions. He told Al-Monitor, “But the impact of the coronavirus has been big.”

In southern Sinai, the consequences of the crisis have largely depended on the area and the economic opportunities that existed in the place. The most affected parts have been the coastal cities of Nuweiba, Dahab and Sharm el-Sheikh, including the villages and towns around them, all heavily dependent on tourism, and Saint Catherine, strongly dependent on this industry as well. Other areas off the map of tourism that relied on other economic activities, such as mining and agriculture, have been less affected.

Saint Catherine, in the heart of south Sinai, is one of the places where the retreat of locals to the mountains has been clearer. In this area, historically characterized for an ancient network of orchards that have been largely neglected for decades as the tourism sector in the area increased, the outbreak of the pandemic has pushed tens of families back to the old orchards to live a more traditional life.

Musa alone knows 15 families that have moved to their family orchards in the high mountains, and another 10 that started to go there on a daily basis.

Zahra Magdi, a botany and chemistry graduate who launched a local initiative in 2017 — Mountain Rose — aimed at creating fresh opportunities for these ancient orchards through modern products, told Al-Monitor that it is difficult to estimate the overall number of families that have started to revive old orchards, but she believes that this could amount to around 50 at most.

The local government in Saint Catherine has also been encouraging people to start growing their own food in order to achieve some degree of self-sufficiency at a local level, Magdi said. To this effect, the municipality has helped provide five greenhouses, which were recently delivered to the locals. The mayor has also offered the locals plots of land and water for free.

Outside of Saint Catherine, many Bedouins have also gone back to the desert, where some still move as a caravan with tents, and have started to raise goats, sheep, camels, grow their orchards and collect herbs, Ahmed, who is also the head of the Sinai Trail, told Al-Monitor.

In the Red Sea mountains, the pandemic has had an even severer impact. There, Bedouins are even more dependent on tourism than those in Sinai, especially because of the lack of economic alternatives and because their role in the industry is more precarious, limited and fragile — this left them with less options to survive when the tourists vanished.

“That didn’t only mean that [those directly working in the tourism industry] lost their livelihoods, but it also meant that the network of exchange that they had with extended family — which would often be living a nomadic lifestyle in the desert — would be cut,” Hoffler warned. “So life became harder for everybody.”

Many families found themselves forced to sell parts of their herd — mainly goats and sheep — which is their main source of material wealth in order to bring money in and absorb the shock. Some had to sell up to half of their herd, he noted.

Since then, many have taken the remaining animals and returned to the desert to live the life that their fathers and grandfathers lived, which is more based on moving between water sources, areas of grazing and using the resources in the desert to survive, according to Hoffler.

“What they are relying on [now] is being able to build those herds back up in time,” he said. “They are hoping that in one or two years they will be able to [return to their previous activities], but in the time they are doing that life becomes more precarious — with their wealth reduced. If there is any other kind of disaster they are much more vulnerable [to face it],” he added.

Now, despite the resumption July 1 of tourism in Egypt, the number of tourists arriving in south Sinai and the Red Sea region is still low. According to Minister of Tourism and Antiquities Khaled al-Anani, about 150,000 tourists had visited the cities of Sharm el-Sheikh and Hurghada up to Aug. 31. The previous year, both cities were listed among the tourist destinations expected to witness the largest growth in Egypt.

As part of these attempts to gradually reactivate tourism in these regions, both the Red Sea Mountain Trail and the Sinai Trail are resuming their activities. The first organized its first trip Sept. 25, and the latter will follow suit by the end of October.

How this retreat by the Bedouins to a more traditional lifestyle will evolve now that the country tries to go back to normal remains to be seen. But for the Bedouins the pandemic has just been the last in a long list of warnings that seem to be again gradually changing their perspectives.

“Now, because of the coronavirus, even if tourists come back to Sinai again most Bedouins I have spoken to want to keep a balance between the tourism business and the traditional lifestyle — and this is good news,” Ahmed noted.

Magdi, from the Mountain Rose, also believes that after the pandemic Bedouins might still look to keep a balance. “People here like to earn money very fast, so when tourism is back I am not sure what they will do,” she said. “But I feel that people now better know the value of the natural resources they have, and they will appreciate it more.”

“The last 10 years have been a hard lesson for Sinai,” Hoffler concluded. “I think it has shown the Bedouins that tourism is good when it is here. But tourism can be affected by many things: it can be affected by politics, by terrorism or by pandemics that seemingly come out of nowhere. And this will result in people entirely leaving the tourism industry; they will certainly think about other ways they can work alongside of it.”