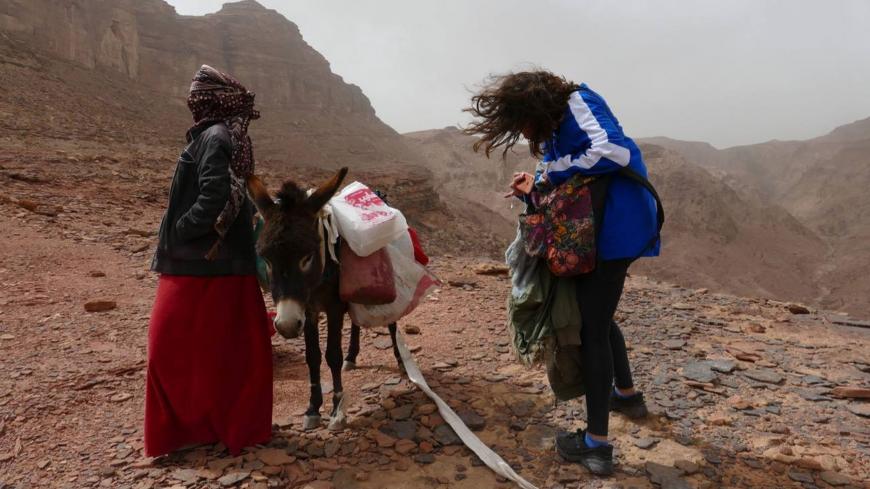 A female guide stands beside a tourist on a Sinai Trail tour, seen in a picture uploaded April 1, 2019. - Facebook/sinaitrail

Umm Yasser, a Bedouin woman from Egypt’s Hamada tribe, remembers the difficulties of growing up in a cave in a mountain in Wadi Sehia, a valley in South Sinai.

More than three decades later, Umm Yasser revisited the cave that she lived in as a child with her mother — this time in the company of 15 women of seven different nationalities who hiked in Sinai between March 29-31. What makes this hike special is that local Bedouin women — including Yasser — lead it.

“I felt pain because I want to forget the bad memories I had [in the cave], but I don’t mind being in pain for a while if it is for the hikers’ sake,” Yasser, who is now 47 and was the lead guide during the hikes, told Al-Monitor. She added, “I am happy to exchange my knowledge and culture with the hikers.”

The initiative was launched by organizers of the award-winning Sinai Trail, a 550-kilometer (342-mile) hiking trail across South Sinai through the territories of eight Bedouin tribes. It starts from the isolated Wadi el-Sahu, the main settlement of the Hamada tribe, which is a one-hour walk from Serabit el Khadem, a well-known locality in southwest Sinai Peninsula.

Since the project of the Sinai Trail was first introduced in 2015, local men have always taken leading roles despite the fact that the project’s goal was to involve the whole Bedouin community in South Sinai as much as possible. But the recent hike that uses women as guides partially cracks the patriarchal and conservative culture that keeps women at home.

“Because of the different roles [men and women have] in society, Bedouin women have different experiences, and we wanted to integrate that,” Ben Hoffler, co-founder of the Sinai Trail, said to Al-Monitor. Hoffler added, “Women here tend to know the mountains closer to their homes better than men, and they probably know the plants better because they are the ones who take the goats out to graze.”

The five female guides were all from the Hamada tribe. According to Hoffler, who has been based in Egypt for the last 10 years, the Hamada is regarded as the oldest and smallest tribe in South Sinai. It has a population of around 1,200 to 2,500 — one of the smallest populations of all the tribes in the region — but it is located on fertile land, with high sandstone mountains and valleys with waterfalls and natural pools.

The trip has raised the hopes of the Hamada tribe of slightly opening up tourism in their remote area, which has been traditionally marginalized and doesn’t have access to these kinds of opportunities that other Bedouin communities have — especially along the Red Sea.

“People of the village and I were very happy because when people come, they bring work and money for us,” said Yasser. “I am especially glad for the younger generations because I am already old. I would like to see [more] people coming and visiting this place to help other women to work.”

One of the conditions to lead the hikes was that the female guides would not stay out in the mountains at night and would only walk with other women — restrictions that were nevertheless turned into benefits by the organizers.

“[In a women-only trip], there are no male-female dynamics; women are not someone’s wife, mother or boss. Rather, they leave those roles behind and are free just to be themselves,” Julie Patterson, member of the Sinai Trail and facilitator of the trip, told Al-Monitor. She described the work of the first-time guides as “amazing.”

For Suzie Balaban, one of the hikers who participated in the trip, the initiative was also an opportunity to get closer to the Egyptian Bedouins. “I am interested in diversity. In Egypt, where everything is so centralized, there are different ethnic groups that are not really celebrated or even accepted,” she said to Al-Monitor. “It was wonderful to experience the way they live and hear their life stories,” she added.

Marion Salwegter, from the Netherlands, was one of the few hikers living abroad who joined the group. “I take every chance I have to go to the desert. But on these trips, all of the guides are Bedouin men. So this one, being a trip to meet Bedouin women, was an awesome [opportunity],” she told Al-Monitor.

The Sinai Trail organization now plans to run a trip of this kind every three months in order to create more jobs for the tribe and build on the first step they have taken. In the future, they would like to integrate further the women of the Hamada into the normal procedures of the Sinai Trail, with the ultimate goal of testing whether other tribes will follow when they see the benefits of the initiative.

Sabha, a neighbor of Wadi Sahu from the Muzeina tribe but married to a man from Hamada, has been living in the village for 12 years and would like to become a guide in the future. “I was surprised when I saw tourists for the first time,” she said to Al-Monitor, referring to the group of hikers. “Here we need work and jobs for the young generations,” she continued, “[so] I hope that people stay here for a long time.”

Hoffler believes the Sinai Trail project will be stronger if women start to participate more. “All the very ancient knowledge of the desert, the wilderness, the plants, the animals, the ways, the stories, the poems, the proverbs coming from the women would be integrated,” he said, “and if it is, the trail would be richer.”