To boost tourism, eight South Sinai tribes have joined together to create a long-distance hiking trail that crosses South Sinai. 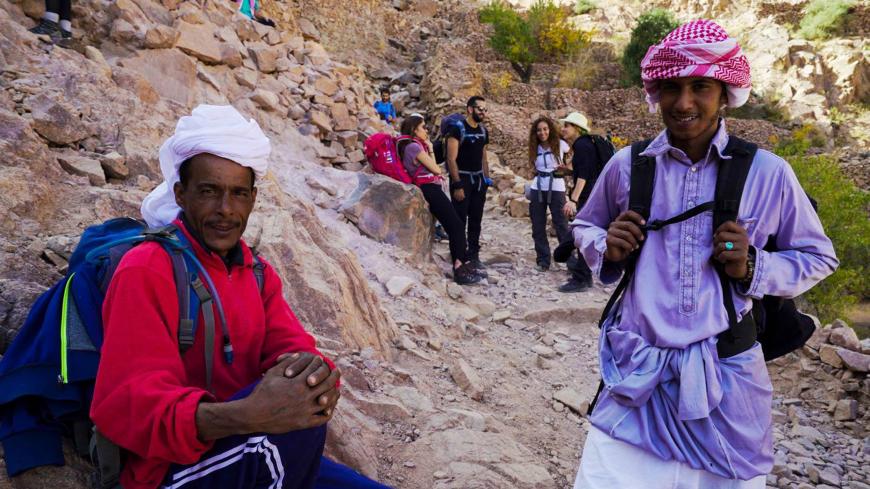 The Towarah Alliance, a union of all South Sinai tribes, used to escort Muslims from North Africa crossing the Sinai Peninsula on their way to Mecca as well as Christians traveling between Cairo, the Saint Catherine Monastery and Jerusalem. The alliance gradually faded with the arrival of motor vehicles.

Now, a century later, the eight South Sinai tribes will unite again in a new tourist initiative: a 550-kilometer (342-mile) hiking trail across South Sinai that takes 42 days to complete. Hikers will be escorted by each of the tribes as they go through their territory. The so-called Sinai Trail will formally open May 11-12 in a ceremony held in Serabit el-Khadem.

The idea was first introduced in 2015 as a shorter route that crossed the territory of the Tarabin, Muzeina and Jebeleya tribes.

Tourism in Sinai has declined amid the instability that has plagued Egypt since 2011, the major problems in the north since 2013 and the downing of a Russian plane in October 2015 that killed 224 people. The industry has sunk to the point of collapse.

Some of the tribes in South Sinai realized that the only way to get ahead is to unite their efforts in a single initiative. “The trail was … a way to help this region and keep some of the tourism alive,” co-founder Ben Hoffler told Al-Monitor. “If we had all just worked in small projects we would not have been strong enough [but] if we create one path where we could focus everything we had, we would have the best chance to help Sinai during this hard time.”

The success of that initial project, which was awarded “Best Wider World project” in 2016 by the prestigious British Guild of Travel Writers, encouraged its founders to pursue the even more ambitious challenge of including the other five South Sinai tribes (Awlad Said, Garasha, Sowalha, Hamada and Alegat) in an extended trail.

“This is something that will happen only once in my life,” noted Nasser Mansour, leader of the Jebeleya tribe, one of the three that has been involved in the project from 2015. He told Al-Monitor, “We will be united again and by doing the [project] together we will become like one [tribe],” he added.

Yusuf Barakat, leader of the Alegat tribe, one of the five new tribes, agrees with Mansour. He said he understands that the importance of the initiative goes beyond the route itself. He told Al-Monitor, “With this trail, South Sinai will now be united, [and] together we will have more contact and more power.”

One important goal of the joint project is to create legitimate jobs for remote and marginalized Bedouin communities. “We try to create not just any kind of work but a particular kind of work that helps Bedouin traditional knowledge, skills and lifestyle to stay alive in the modern era,” Hoffler said. “A lot of the Bedouin knowledge about the mountains, the names of valleys, paths and animals, or how to use plants for different purposes are genuinely relevant to the Sinai Trail.”

Just five people were needed when the first trail was opened, but currently between 40 and 50 members of the South Sinai tribes are working on it. The project also offers indirect opportunities for drivers, staff in the camps and shops and makers of handmade products.

According to the organization, more than 500 people have already walked the trail. Hikers have come from every continent, but most are Egyptians.

“Most of the people coming from Cairo did not know much about the people in Sinai,” said Mansour from the Jebeleya tribe. “But when they come and stay with us they know more about the Bedouins and we can both learn about each other.”

Samantha Fathelbab, an Egyptian hiker from Alexandria who has already done the first trail and plans to participate again, agrees with Mansour. “You feel immersed in the Bedouin culture over the course of 12 days. Each one is unique in its own way,” she told Al-Monitor.

For Barakat from the Alegat tribe, the trail offers not only an opportunity for people with different backgrounds to interact, but also a chance for the tribes themselves to share knowledge. He noted, “We learn together as well. We all have different kind of works, medicines … and when we come together I learn from other tribes while other tribes learn from mine.”

According to Hoffler, the new trail has been met with a huge response from hikers, and more than 100 people are already expected to attend the opening.

One of them is Muhamad Ismail, a hiker from Cairo who will come to learn details about the new trail, which he will try out during the next hiking season after the summer. He told Al-Monitor, “I am sure that everyone who goes has his own experience, and anything you can do to learn from different cultures is a great [opportunity].”