Ankara puts off filling its Ilisu Dam for the second time to temporarily ease Iraqis' fear that their water shortage will worsen. 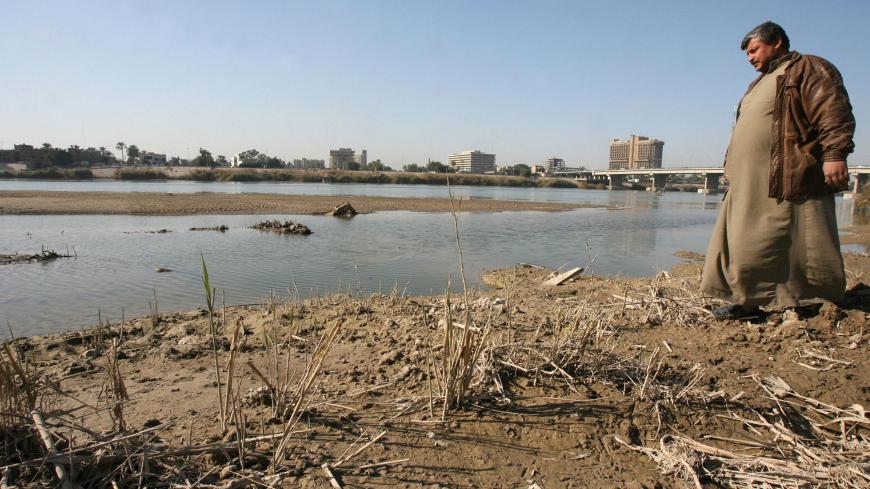 Turkey has stopped filling its controversial Ilisu Dam on the Tigris River and agreed not to resume the process until July 1, but Iraqis' fears for the river's future persist.

The political heat and popular frenzy against Turkey are ongoing in Iraq, with some Iraqis calling for Turkey to cancel the project. That's not likely, as the $2 billion undertaking has been in the works for 20 years. The dam is expected to begin generating electricity next year.

Turkey began filling the dam in early June, but announced June 7 it would hold off until July to give Iraq more time to deal with its water crisis. Turkey had already delayed filling the dam for three months. Iraqi parliament member Abdul Hussein al-Ezerjawi on June 10 called the filling process a "fait accompli,” as his government currently has no means of blocking the project.

Iraqi Prime Minister Haider al-Abadi said the timing is a "political matter” through which the Turkish government hopes to win the votes of Turkish farmers in the June 24 presidential election. Turkish Ambassador to Baghdad Fatih Yildiz denied any such connection.

The new delay will do little more than postpone the crisis, especially as drought conditions are expected to continue for many years. The Iraqi government has been talking about the water crisis for a while but has revealed no proposed solutions and has taken no observable measures to control the vast water waste by some farmers.

Abadi, however, assured the public there are "plans and sound procedures to safeguard water resources," but he didn't elaborate other than to say he will continue talks on the subject with Ankara.

Under an agreement between Iraq and Turkey, Ankara was obliged to inform Baghdad six months before it planned to begin filling the dam, and did so in October.

At a June 7 press conference in Baghdad, Iraqi Minister of Water Resources Hassan al-Janabi downplayed the severity of potential problems arising from the Ilisu Dam, but also said, "Iraq has to mobilize its political and diplomatic efforts" to deal with the changes. Janabi expects Iraqi water reserves to drop to 30 billion cubic meters (1.06 trillion cubic feet) by the end of 2018, which he said will be the lowest level since 1931.

The Iraqi government said it has a plan to respond to drinking water needs and 50% of agricultural needs, securing irrigation for 600,000 dunams (148,000 acres) of summer crops and 1 million dunams (247,000 acres) for gardens.

“Iraq has shifted from a flooding crisis to a water shortage crisis," Azzam Alwash, head of the environmental nongovernmental organization Nature Iraq, told Al-Monitor. The drought and Turkey's dam aren't the only reasons, however; he also cited ineffective irrigation methods. “For Iraq to maintain the water allocated to irrigation, it has to abandon … traditional methods used since the Sumerians … and adopt drip irrigation instead, as it will help save huge amounts of our water," he said.

"If no solutions are [found], agriculture in Iraq as we know it will end,” he warned.

The Iraqi Ministry of Water Resources assures Iraqis that the Ilisu Dam won't cause a crisis. In a June 4 press statement, Ali Habeeb al-Mamouri, assistant director of the ministry’s Water Resources Management Office, said, “The current decrease in the Tigris water level is not due to the Ilisu Dam, but rather due to the ministry’s storage of water behind the Mosul Dam,” which is Iraq's largest dam.

Despite assurances by the Iraqi government, the agricultural sector in Iraq has been severely harmed in the past few weeks and this may affect about half the country's irrigated lands. Iraq's current reserve can only cover 50% of the summer irrigation plan laid out by Abadi’s government.

Haider Abdul Wahid, head of the Union of Farming Associations, told Al-Monitor in an interview that the specter of 50% of Iraq's agricultural lands being deprived of water "rings warning bells on the Iraqi agriculture dossier.” He added, “Consequences of the harm will start to appear from the middle of June to December 2018." Damage is already visible in the rice and corn sectors.

Iraqi Ministry of Agriculture senior adviser Dhafir Abdullah expects Iraq to lose half a million dunams (almost 124,000 acres) of agricultural lands because of the water crisis, and more as the dam fills.

The dam's reservoir has a maximum capacity of 10.4 billion cubic meters, and its power station will have a capacity of 1,200 megawatts. Turkey says it will generate 3,800-gigawatt hours of power per year. Environmentalists fear that once the dam is filled, it will flood 199 villages and submerge the 12,000-year-old town of Hasankeyf, according to the Initiative to Keep Hasankeyf Alive. Turkey, however, disputes those figures, saying that Hasankeyf alone will be affected and that work is underway to excavate and preserve as much of the town as possible.