Iraq fears bevy of levees will mean parched years ahead

Although the water level is high this year in the Tigris and Euphrates rivers, Turkey's imminent filling of the Ilisu Dam reservoir is raising concerns about Iraq's water flow next year and for years to come. 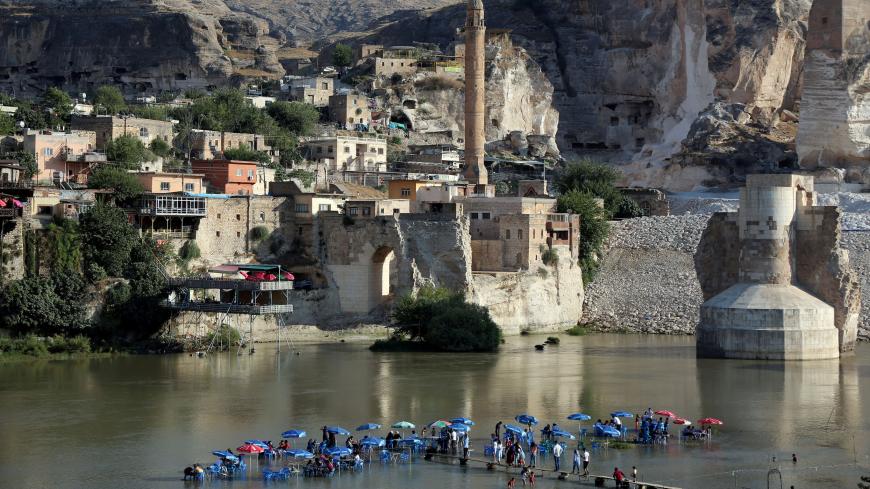 A general view of the ancient town of Hasankeyf by the Tigris River, which will be significantly submerged by the Ilisu Dam being constructed, in southeastern Turkey, Aug. 26, 2018. - REUTERS/Sertac Kayar

BAGHDAD — Although water levels in the Tigris and Euphrates rivers have been rising as torrential rains fill some of the largest dams in Iraq, the threat of drought persists.

Turkey is now taking the necessary steps to fill its controversial Ilisu Dam, while Iran continues to cut off tributaries of the rivers flowing into Iraq. Turkish President Recep Tayyip Erdogan said at a March 7 rally that the country will begin filling the reservoir of the dam on the Tigris River in June, despite warnings from the Iraqi government that the process will dry out large areas of the country.

According to the Iraqi Ministry of Water Resources, the water reservoirs contain 29 billion cubic meters, which is enough for the coming summer and winter. However, filling the Ilisu Dam will take two to three years and strategic reservoirs will be consumed, threatening Iraq’s water security. Meanwhile, Iraqi authorities have no clear means of resolving the crisis with Turkey, although it has been going on for years, peaking last year.

The Ilisu project on the Tigris in southeastern Turkey was launched in 2006. It is one of 22 dams Ankara aims to build on the Tigris and Euphrates rivers. The dam is 65 kilometers (45 miles) from the Iraqi border and stretches 1,820 meters (1.1 mile).

The structure stands 135 meters (443 feet) high, is a couple of kilometers (more than a mile) wide and has a basin area of 300 square kilometers (127 square miles).

Aoun Diab, an adviser at the Iraqi Ministry of Water Resources, told Al-Monitor, “Filling the dam in June will not have much impact [this year] on Iraq due to the high water reservoirs thanks to heavy rain. But if the next year is dry, continuing to fill the dam will necessarily affect Iraq's water share from the Tigris River.”

Iraqi parliament member Mohamed Amin revealed one potential solution to the water crisis with Turkey, telling Rudaw, “There are joint projects with Turkey and ongoing cooperation on the filling of the dam. Turkey has also made a proposal to support international organizations to build three common dams with Iraq and the Kurdistan Regional Government [KRG] to achieve more convergence.”

However, Mansour al-Baiji, a member of the Iraqi parliament's Water Committee, ruled out the possibility of Ankara looking for solutions that serve Baghdad.

“Iraq is subject to a true water blockade and Turkey is using the water issue for political purposes. Iraq must take action to contain the crisis, which may extend for years to come," he told Al-Monitor. “The UN and international organizations must intervene to solve this crisis. The common rivers are common property, and postponing filling the dam, or an abundance of rain, doesn't mean a drought won't occur, unless Iraq signs agreements to guarantee fixed water shares.”

On the other hand, Iraq has no agreement to regulate the passage of rivers except for the 1975 Algiers Agreement to share the Shatt al-Arab — and Baghdad and Tehran dispute that arrangement. That agreement received little attention for years but made it back to the front burner after Iranian President Hassan Rouhani visited Iraq on March 11. Despite the fears of some experts and observers that the deal doesn't favor Iraq, some believe it will be binding on Iran to release the water of the Karun River, which flows into Shatt al-Arab. That would raise the water level and rid the coast of high salinity.

However, Tehran — which has stopped or reduced the flow levels of 42 tributaries emanating from Iran and pouring into the Iraqi territories, including Karun and Little Zab — is unlikely to commit to releasing the water, especially as it is building new dams on those rivers. So far, it has built 109 dams, the last of which was the Kolsa on Little Zab.

Iraqi parliament member Raad Aldalki told Al-Monitor, “Drought will eventually hit Iraq hard because of the Iranian and Turkish dams, especially Ilisu and Kolsa. The Iraqi government needs to internationalize the crisis if neighboring countries refuse to cooperate with Baghdad and solve it.”

Aldalki noted that Iraq can't counter Iran's moves to change the course of the Karun River, which is much more dangerous than the crisis of dams.

It seems that Iraq depends on rainy seasons to run its water affairs, temporarily, without relying on bilateral agreements with riparian countries such as Turkey, Jordan and Syria, and has no plans to build new dams and lakes to create larger reservoirs. The next drought won't be easy to deal with, especially as the upstream countries — Turkey and Iran — will be in a position to impose conditions in exchange for limited water releases.