Iraq points to Turkey's Ilisu Dam as the cause of its water crisis, but Ankara says Baghdad needs to manage its resources more efficiently. 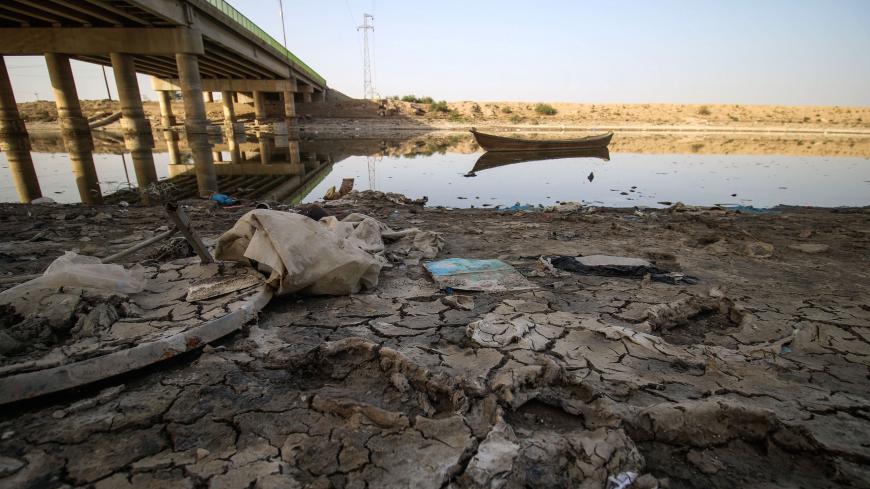 A dried-up shore of an irrigation canal is seen near the village of Sayyed Dakhil, to the east of Nasariyah city, some 300 kilometers (186 miles) south of Baghdad, March 20, 2018. - GETTY/Haidar Mohammed Ali

The world is seeing images of people walking across the much-diminished Tigris River in Iraq. Dead fish abound. Some disaster scenarios even predict the Euphrates and Tigris rivers could dry up by 2040 if effective water-management measures are not taken.

It's no wonder the decades-old water dispute between Iraq and Turkey has erupted anew.

Turkey completed construction of the Ilisu Dam on the Tigris earlier this year and began filling a reservoir behind the damn in early June, but because of increasing objections, the countries have since agreed that Turkey will allow the river's natural flow to continue until Nov. 1. Delegations from Ankara and Baghdad are to meet Nov. 2 for further discussions.

Related developments were reported in detail by Mustafa Saadoun in Al-Monitor on June 13.

According to the Turkish side, the dimensions of the crisis are not being debated honestly. Iraq’s own Ministry of Water Resources Management has said the crisis isn't because of Ilisu, but because there's a lack of sufficient water at Iraq's Mosul Dam. Yet that statement seems to be ignored when it's convenient.

Iraqi Prime Minister Haider al-Abadi claimed that Turkey had begun holding water at Ilisu to win the votes of its farmers in the June 24 elections. But Ilisu is designed to generate power; there is nothing there to benefit farmers. After filling the dam to operate the generator turbines, Turkey will have to release the water anyway. Nevertheless, Ankara preferred not to challenge Abadi to avoid raising political sensitivity in Iraq.

Turkish sources told Al-Monitor that Ankara has been reasonable about releasing water to the Euphrates and Tigris rivers so as not to make life difficult for Iraq and Syria. According to a protocol signed with Syria in 1987, Turkey has to release 500 cubic meters (0.4 acre-foot) per second to the Euphrates. If that amount can't be provided during one month because of drought, then it is made up the next month. Although there is no such arrangement with Iraq for the Tigris, Turkey nevertheless informs Baghdad of the amount released to the Euphrates. Baghdad then compares the water it gets with the amount Syria receives and demands the same.

Ankara also points out that in the dry summer months, the water level falls, but this very basic fact is often ignored. According to a 2013 NASA report, between 2003 and 2010, "Parts of Turkey, Syria, Iraq and Iran along the Tigris and Euphrates river basins lost 117 million acre-feet of total stored freshwater. That is almost the amount of water in the Dead Sea."

Also, Baghdad claims Turkey’s massive Southeast Anatolia Project (which includes the Ilisu Dam) has caused an 80% reduction in water flow to Iraq. About three-fourths of that entire project is complete, with 22 dams, 19 hydroelectric power stations and irrigation of 1.8 million hectares. However, more than half the Tigris' flow is fed by waters in Iraq. The river carries on average 52 billion cubic meters of water every year, with 40% coming from Turkish sources and 9% from Iran; the remaining 51% is from Iraq’s own sources.

A leading expert on the issue, professor Aysegul Kibaroglu of MEF University, believes the problem in Iraq is not linked to the Ilisu Dam. “Iraq’s water crises are because of wars, embargos and [Saddam Hussein's] unjust water management of the past 40 years. Climate change, global warming and decline in snowfall also contribute to it,” Kibaroglu told Al-Monitor.

Turkey has several ideas designed to ease the water shortage. It proposes installing water meters on both sides of the border to determine how much water is released to the Euphrates and Tigris. Turkey has offered to pay for the meters. Ankara also proposes joint projects to improve and develop irrigation systems and setting up joint mechanisms for water management. But one basic problem is what constitutes a "fair" share.

Turkey classifies the Euphrates and Tigris rivers as “water crossing the border” and proposes sharing according to a formula of "just and according to needs." Iraq and Syria prefer to use the classification “international waters,” and they want equal shares. The three parties don’t have an international accord they can rely on, as Turkey has not signed the 1997 Convention on the Law of the Non-navigational Uses of International Watercourses.