Can Iraq reach dam agreement with Turkey to protect marshes?

Recent Turkish dam projects, in particular the Ilisu Dam, affect the level of water in Iraq significantly with the marshes drying and the agricultural industry witnessing a significant decline. 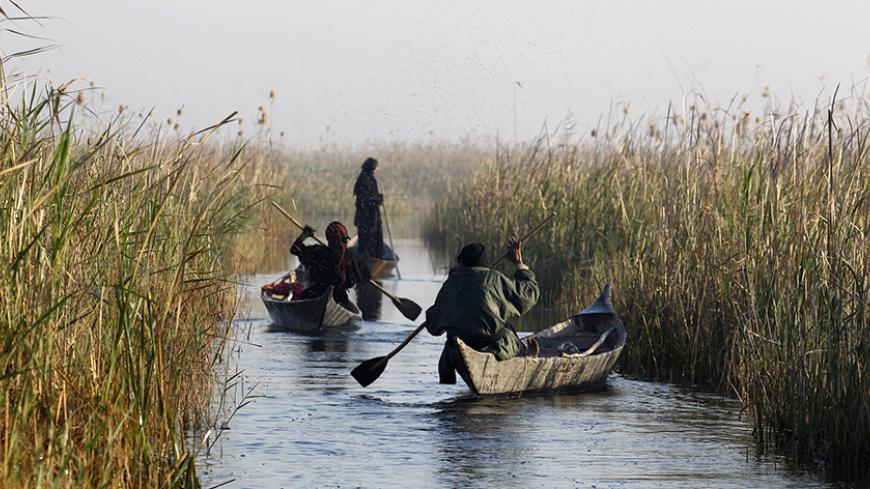 BAGHDAD — Severe drought is affecting agricultural lands across Iraq because of the low levels of river water. Iraqi officials have raised the alarm on the negative impact of the Turkish Ilisu Dam on the Tigris River, which is scheduled to be completed by the end of 2016.

Iraqi Minister of Water Resources Hassan al-Janabi and other politicians have been vocal on this matter. In a Sept. 17 media statement, Janabi said, “Iraq will be teetering on the edge of a disaster when the new dam starts operating. The Iraqi government hopes to reach a satisfactory solution with the Turkish government in this regard.”

Rasul al-Tai, a parliamentarian for the al-Ahrar bloc, requested the government in a media statement Sept. 25 to “exercise the necessary economic leverage on Turkey to stop the dam construction and take the necessary measures to activate water agreements with Turkey.”

Such agreements are of paramount importance given the fact that the headwaters of the Euphrates and Tigris are controlled by Turkey and Iran.

In the same vein, parliamentarian Aziz al-Ugaili also sounded the alarm on the Ilisu Dam in a media statement Sept. 24. “The Turkish dam will affect the sustainability of the Iraqi marshlands, which were inscribed on the World Heritage list on July 17, 2016,” Ugaili said.

Of note, Turkey has cut off water on more than one occasion in the past, and it caused a major humanitarian crisis every time, prompting dozens of families to flee their residences in the Ramadi area in Anbar province, where the Euphrates River flows.

In further evidence of Ugaili’s statements, Furat al-Tamimi, the head of the parliamentary Water and Agriculture Committee, told Al-Monitor, “Turkey will escalate its systematic water ban into Iraqi territories, which would take a heavy toll on agriculture, following the completion of the dam’s final stages.”

He added, “Iraq has been objecting to the dam project, but to no avail. Upon completion, Iraq will lose about 50% of the Tigris River.”

Tamimi talked about an “anticipated meeting between parliament and the minister of water resources scheduled for October to discuss plans and procedures to address the risks of the dam construction and the negative effects on irrigation and agriculture.” He added, “Parliament will also host officials in the Ministry of Foreign Affairs to look into diplomatic efforts for international lobbying against the dam project.”

An October 2015 study by the World Resources Institute revealed that Iraq ranks 21th on the list of countries that are threatened by water crisis, despite having two rivers flowing in its territories.

Civil engineer Qahtan Khayal al-Sultani, who worked on irrigation projects in the center and south of the country, told Al-Monitor, “The Islamic State and other armed groups controlled dams and water projects in the country’s west and east. Iraq’s dry climate and high temperatures increase the evaporation of water, which prompts farmers to leave their lands. This is especially true since large quantities of water are being wasted due to the rudimentary irrigation techniques and the lack of water storage projects. Most of the water is channeled to Shatt al-Arab and then the Gulf without being tapped into.”

With the growing danger of receding water levels in irrigation canals, there have been increasing calls to address the threats to the water security. Prime Minister Haider al-Abadi's office had said in a media statement on June 17, 2015, “The water issue is of paramount importance in Iraq’s foreign policy with Syria and Turkey, and Iraq is trying to find solutions and settlements with these countries to increase its shares of water.”

One of these solutions, parliamentarian Ali al-Badri told Al-Monitor, "is to exercise economic leverage on Turkey so as to coordinate the construction of dams and reservoirs it intends to set up and ensure a fair water distribution between the upstream countries [Turkey and Iran] and the downstream countries [Iraq and Syria].” Badri also suggested “using the oil that is being transported through Turkish territory as a way to lure Turkey since it is in dire need of it.”

One ought not to forget the political purpose of Turkey’s dams. In this regard, Badri said, “Turkey is following water policies to influence regional crises in neighboring countries. This is clearly demonstrated in its quest to influence the situation in Syria and Iraq through water leverage.”

Another solution was suggested by Mahdi Rashid, the director of the Public Authority for Dams and Reservoirs at the Ministry of Water Resources, who told Al-Monitor, “Iraq must have understandings with Turkey. In fact, Iraq is scheduled to launch official talks through the Ministry of Water Resources in October to find ways to prevent the bad impact of the dam on Iraq’s amount of water.”

Rashid added, “The Ilisu Dam is likely to reduce the water supply of the Tigris River to 8 billion cubic meters per year, which would come to the detriment of the agricultural sector, increasing desertification areas in Iraq by a large margin. This would also affect power generation in the hydraulic facilities on the Mosul Dam and the Samarra Barrage.”

Amer Habib, a specialist in agriculture and irrigation at the Mussayib Institute in Babil, told Al-Monitor, “In 1990, Turkey completed the Ataturk Dam on the Euphrates River, which is one of the largest dams in the world. The dam has caused shortage in the irrigation water in the areas through which the river cuts, including in Babil governorate.”

He said, “Iraq’s decreasing water shares from Turkey has led to social and environmental shifts because of the resulting high level of salinity and desertification, which prevented farmers from cultivating the lands.”

To overcome these water crises, Iraq has to implement international treaties, guaranteed by international law, that regulate water shares between upstream and downstream countries. Iraq has also to start using modern irrigation and storage techniques so as not to waste water and to irrigate larger areas with the minimum amount of water possible.