Although the recent earthquakes did not cause serious damage to Iraq’s dams, specialists are calling for continuous maintenance to ensure they are not demolished in the future, leading to a disaster in Iraq. 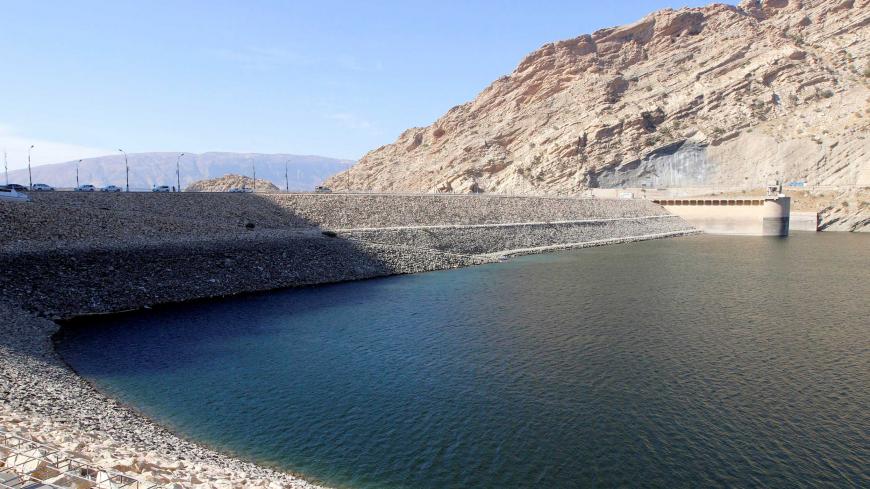 A general view of the Darbandikhan Dam, near the city of Sulaimaniyah, in the semi-autonomous Kurdistan Region, Iraq, Nov. 13, 2017. - REUTERS/Ako Rasheed

BAGHDAD — International experts arrived in Baghdad Nov. 21 to assess the damage caused to the Darbandikhan Dam, southeast of Sulaimaniyah, as a result of the earthquake that hit Iraq and Iran on Nov. 12.

Minister of Water Resources Hassan al-Janabi told the media a day prior to the experts' arrival that “the earthquake effects on the dam have sparked concerns.” He pointed out that there is a need to “reduce the water level in the dam reservoir for more safety.”

On Nov. 19, the director general of the dams in the Kurdistan Region, Akram Ahmed, called on the federal government to provide the necessary funds for the restoration of the Darbandikhan Dam.

However, the parliament’s Committee on Agriculture, Water and Marshlands announced Nov. 20, “The Darbandikhan Dam is operational and the damage wasn't serious.”

Parliamentarian Zeinab al-Taei, a member of the Committee on Agriculture, Water and Marshlands, told Al-Monitor that the World Bank is “examining Iraq's request and mulling over a material contribution to the reparation works.” He added, “The financial crisis is affecting the effort put into the reconstruction of irrigation projects in the country.”

Earthquakes are not the only danger threatening dams in Iraq. Over the past years, many dams served as battlefields between the federal forces and their allies on the one hand and the Islamic State (IS) on the other. Since its invasion of Iraq in 2014, IS occupied the areas where the dams are located.

On Aug. 17, 2014, US-led coalition aircraft launched a series of air raids against IS fighters near the Mosul Dam in northern Iraq. And an attack launched Dec. 14, 2016, on the Haditha Dam in western Iraq on the Euphrates River, west of Anbar province, was foiled by US intelligence agencies.

However, Aoun Dhiab, a senior expert and member of the advisory body of the Ministry of Water Resources, told Al-Monitor, “The dams managed to overcome all these dangers.”

“The Darbandikhan Dam on the Diyala River was affected by the 7.4-magnitude quake given its proximity to its epicenter,” Dhiab added, as he pointed out that “the Dukan Dam north of Sulaimaniyah was far from the epicenter and was not affected by it.”

He said, “The damage caused to the Mosul Dam is under control. In normal times, the dam foundations need regular cement injections based on the recommendation of the Swiss expert who supervised its construction in 1986, given the nature of the land on which the dam was built."

Dhiab also said, “The ministry's reconstruction committee is working on repairing what IS destroyed in the Ramadi Barrage and the Euphrates Channel.”

Iraq’s dams are not only facing natural or human risks, there are also risks coming from neighboring countries amid increasing warnings about the collapse of giant Turkish dams due to earthquakes.

Parliamentarian Abdul Hadi Odeh, another member of the Committee on Agriculture, Water and Marshlands, told Al-Monitor, “Any earthquake that causes damage to the dams in Turkey will have devastating effects on Iraq.”

Odeh said, “Iraq does not need new dams, and there are contingency plans for any harm that could affect the existing dams” and pointed out “the danger coming from the Turkish Ilisu Dam.”

“The dam will also prevent water from reaching large parts of Iraq and will reduce the level of water in Iraq,” he noted.

Odeh added, “Based on such concerns, Iraq agreed with Turkey that the Turkish authorities would inform the Iraqi authorities six months before the start of storage in the dam, which begins in March until September 2018.”

“During the last meeting with the minister of water resources in mid-November, we asked the Iraqi prime minister to intervene with Turkish President Recep Tayyip Erdogan to find a way out of the expected crisis,” he said.

He continued, “The central and southern areas are suffering from severe drought, particularly in Dhi Qar, Basra and Samawah. Even drinking water declined, thus greatly affecting the lives of citizens and livestock in most areas of the Euphrates basin."

Asked about the reason behind the crisis, Odeh said, “In addition to Turkish dams, the dams in western and northern Iraq on the Euphrates River allow limited water releases for agriculture, and the violations committed by farmers in terms of their water quotas reduce the water quotas required by citizens.”

Odeh said, “We explained to the minister of water resources the need to develop and mechanize the irrigation system in Iraq using modern technologies in order to overcome the water shortage crisis.”

He also revealed, “The national water security is in the hands of the regional countries because about 70% of the sources of water releases come from abroad, while only about 30% of them come from Iraq.”

Iraqi water security seems to be closely related to the safety of its local dams, and there is a need to protect them from any incidents that could harm them. There is also a need to develop quick and efficient repair techniques.