After angry demonstrations against the government in Basra about the lack of potable water, the southern Iraqi province is preparing to tackle the problem by building a dam on the Shatt al-Arab River. 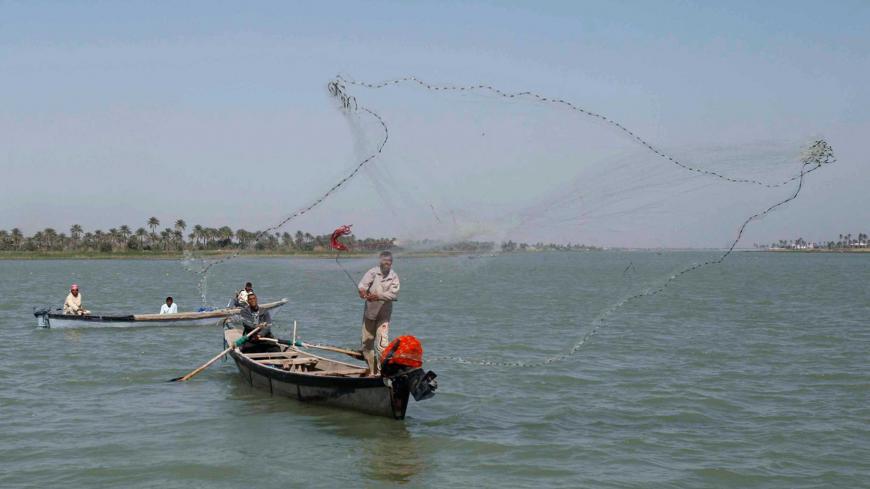 A fisherman casts his net into the waters of Shatt al-Arab near the southern city of Basra, Iraq, March 15, 2011. - REUTERS/Atef Hassan

Iraqi Minister of Transport Kazem Finjan al-Hamami revealed July 25 that Iran has agreed to participate with Iraq in the construction of a dam on the Shatt al-Arab River — formed by the confluence of the Tigris and Euphrates rivers — to confront the ongoing water crisis. Both countries hope to achieve bilateral benefits from the project to be established in Abu Flous Port in Abu al-Khaseeb district.

The agreement comes at the heels of the popular protests organized in Basra on July 8 about the lack of drinking water and services. On July 5, Basra’s tribes asked the Iranian government to stop the flow of water into Iraqi territory, which increases the salinity in the Shatt al-Arab River.

Interest in the water salinity crisis seems to have grown following the protests. On July 11, the Iranian Khuzestan governor reacted to the water problem by supporting the establishment of a dam on the Shatt al-Arab to solve the water shortage crisis in Basra and in Abadan and Khorramshahr in Khuzestan.

This long-standing problem, raised by popular protests in southern cities, was addressed by the Iraqi government in 2016 when it was forced to build an 80-kilometer (50-mile) dirt cover at the port of the Shalamjah border with Iran to prevent the highly salty Iranian water from reaching the Shatt al-Arab.

“The salinity of water in the Shatt al-Arab has become a real threat to the people of Basra,” said Sadiq Attia, a member of the committee of experts at the World Meteorological Organization.

Speaking to Al-Monitor, Attia proposed the solution of “giving the city its full share of the Tigris water, over which the governorates of Maysan and Wasit alternate. In addition, a dam on the Shatt al-Arab should be built to prevent the salt waves from reaching deep into the Shatt al-Arab.”

Meanwhile, Abdul Waheed Barakat, an adviser to the governor of Basra, told Al-Monitor, “On July 28, in response to the protests, the federal government approved a project to build desalination plants as a solution to this crisis.”

He noted that the strategic solution would be to “build a dam on the Shatt al-Arab to reduce the increasing salinity rates caused by the Karun River, stemming from Iran, and which was turned into a dumping site for industrial water and sewage.”

Barakat said, “Technicians from the Marine Science Center at the University of Basrah and consulting firms have started to study the feasibility of this project on the ground.”

“The dam will contain tubes that will allow it to serve as a submersible dam made of reinforced plastic,” Barakat noted, adding, “A consulting firm will be hired to find the right spot and shape to go with the Iraqi marine environment.”

Aoun Dhiab, a senior expert and consultant at the Ministry of Water Resources, told Al-Monitor, “It is difficult to equip the Shatt al-Arab with fresh water from the Tigris and the Iranian Karun River, because farmers have taken over all locations along the river's waterways, exceeding the water quota of the Shatt al-Arab.”

He added, “It is particularly important to establish a dam on the Shatt al-Arab to prevent the penetration of seawater into it, as happened in 2018.”

Dhiab continued, “It would be difficult to build a dam in the area of Abu Flous, where the banks of the Shatt al-Arab are inside Iraqi territory, given the fact that sewage from Basra, Abu al-Khaseeb, Shatt al-Arab and all other cities will pour into that area. If this issue is not addressed, the water the dam will store will surely be polluted and unsuitable for use.”

Dhiab does, however, support the option of “building a joint dam with Iran on the Shatt al-Arab where it meets in the Gulf region, in the Ras al-Bisha area. It would be jointly managed, and corridors suitable for the passage of ships would be secured.”

The dam sites that Dhiab mentioned were the subject of an old dispute between the local government in the province of Basra and the Ministry of Water Resources, which decided to choose a site other than the one specified by the provincial council in the area of Abu Flous in Abu al-Khaseeb.

This dispute grew on Sept. 10, 2016, when the Ministry of Water Resources said it had no budget to deal with the water problems in Basra.

Today, objections to the dam are seemingly a thing of the past, given the pressure the popular protests in Basra have exerted. This was seen July 25 when the general secretariat of the Council of Ministers supported the position of Basra’s local government for the construction of the dam with the purpose of calming the situation in the southern province.

The Ministry of Water Resources thus called for carefully considering building the dam on the Shatt al-Arab to make the most of the available water revenues and to prevent the entry of salt water from Iran. This is how the construction of the dam on the Shatt al-Arab became a reality due to the popular demands of the local government to provide drinking water. Not only will this project be a great achievement when it comes to the water crisis, but it is also crucial to calm the anger of the masses who took to the streets carrying bottles filled with polluted water in Basra and other Shiite southern cities.

by Ismail BELLAOUALI with Philippe AGRET in Rabat and Marie GIFFARD in Madrid | AFP | Jun 24, 2022
END_OF_DOCUMENT_TOKEN_TO_BE_REPLACED