The plea comes as many disillusioned Iranians have vowed to boycott the election. 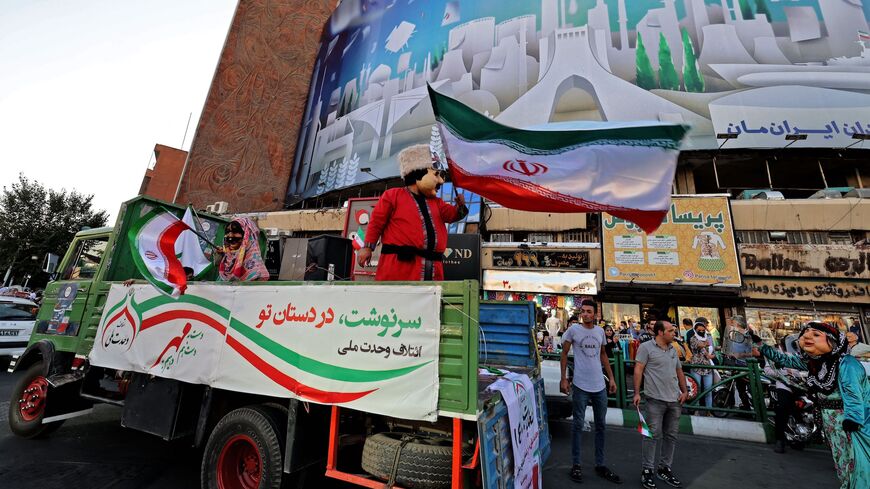 Iranians are called to vote in the upcoming presidential election during a street rally in the capital Tehran on June 15, 2021, three days ahead of the Islamic republic's June 18 vote. - ATTA KENARE/AFP via Getty Images

Foreign Minister Mohammad Javad Zarif reached out to all Iranians to participate in Friday's presidential election, which has been lamented as a one-sided race fixed by powerful hard-liners.

In a video message posted on Instagram, Zarif told Iranians that their vote would accelerate the lifting of Western sanctions, which have pushed the Iranian economy to the edge of collapse and triggered widespread public discontent and disillusionment.

Zarif said voting will put an end to the "economic war," a term Iranian officials recurrently employ in reference to those sanctions. The Iranian foreign minister acknowledged "shortcomings and mistakes" in the country's management and expressed his personal apology, but noted, "Breaking up with the ballot box is not the solution, nor will it alleviate the grievances."

The top Iranian diplomat did not endorse any of the seven candidates, most of them hard-liners. Leading those nominees is judicial chief Ibrahim Raisi, known for his anti-Western antagonism, whose anticipated landslide victory has been paved by the Guardian Council, a candidate-vetting body packed with like-minded ultraconservative clerics.

The arrangement ahead of the race has seen prominent centrists kicked out of the battlefield. Even before the purge, many Iranians had declared on social media that they planned to skip the balloting, which in their view has failed over decades to usher in genuine change. The boycott campaign has even reached former hard-line President Mahmoud Ahmadinejad, who was also disqualified by the Guardian Council.

The country's Reformists, on the other hand, are reeling from the removal and continue to scramble for consensus. In the divided camp, Green Movement leader Mir-Hossein Mousavi, who is under house arrest, has openly backed a boycott of the "humiliating" election. Yet, Mehdi Karroubi, another opposition leader under house arrest, has thrown his weight behind Abdulnaser Hemmati, one of the two little-known moderate candidates in the race.

Karroubi cranked up pressure on the Reformist Front to come up with a name ahead of election day. Nevertheless, the group's meeting only laid bare internal rifts as they failed to rally support behind Hemmati. Should such confusion drag on in the coming days, it would mark the Reform movement's first failure — since its birth in 1997 — to actively support a candidate in an Iranian presidential election.

The latest polling released June 14 put the expected turnout at 42%, up from 38% last week. The trend was hailed by conservative media outlets as a "jump." When compared to previous elections, such figures still mark a sharp drop by around half. And that overall apathy, according to hard-line newspaper Javan, should be blamed on the government of moderate President Hassan Rouhani and its "failure" to address public grievances.