An Iranian polling organization found that only one out of three eligible Iranians were planning to vote in the upcoming presidential election, suggesting it will be marred by the lowest turnout ever in the history of the Islamic Republic. 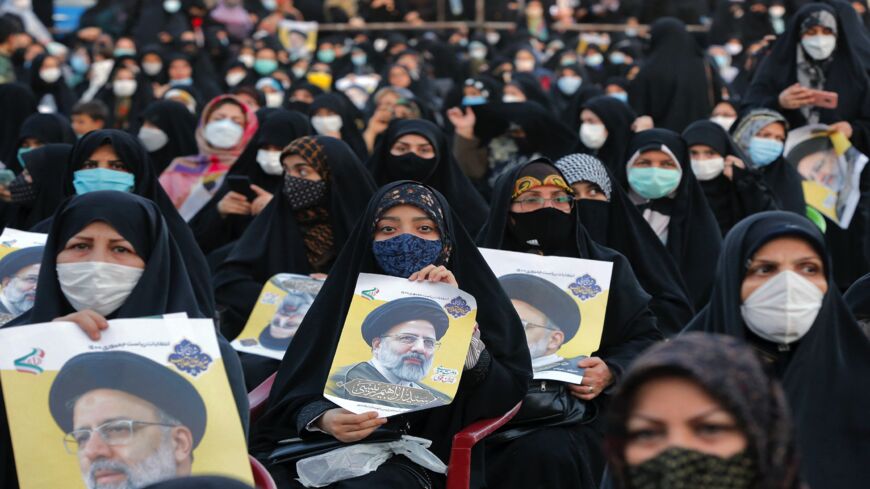 Women supporters of Iranian presidential candidate Ebrahim Raisi hold up his posters during an election campaign rally in the city of Eslamshahr, about 25 kilometers south of the center of the capital, Tehran, on June 6, 2021. The 60-year-old ultra-conservative Raisi, widely seen as the favorite to win the June 18 presidential election, heads the judiciary and is a "hodjatoleslam," one rank below that of ayatollah in the Shiite clerical hierarchy. - AFP via Getty Images

The results of the latest polling ahead of Iran's key presidential election indicate growing apathy among the Iranian public toward the polls.

The survey was conducted by Iran Students Polling Agency (ISPA), which is affiliated with the country's Ministry of Science, Research and Technology. Covering over 1,500 respondents, the polling estimated the final voter turnout to stand around 38%.

ISPA's results also showed that only 34% of eligible voters are "absolutely" going to the ballot boxes. The polling further suggested that the ongoing campaigning has not only failed to lure new voters, but it has even pushed another 5% away from the election when compared to another poll in May.

The figures also marked a sharp, unprecedented drop from all previous presidential elections in Iran. The last three votes witnessed turnouts ranging between 72 to 85%.

Iran is set to hold the election on June 18 at a moment of public disillusionment with the country's battered economy, which has coupled with accumulated fury at human rights violations and a clampdown on civil freedoms. Despite such a backdrop, Iran's ruling establishment decided to make the race a one-sided competition among candidates handpicked by its hard-line Guardian Council.

The candidate vetting body, which only answers to Supreme Leader Ayatollah Ali Khamenei, removed several contenders with centrist leanings despite their decadelong roles within the very core of the Islamic Republic's decision-making process.

The selection process has also boosted the already ongoing boycott campaigns, strengthening speculations that the ruling establishment is going the extra mile to secure an easy landslide for ultraconservative cleric and judiciary chief Ebrahim Raisi, a close ally of the supreme leader.

Of the eight finalized candidates, six are aligned with the hard-line, powerful political factions. The remaining two are believed to have been chosen from obscure figures of the moderate camp and have not even drawn an official endorsement from their own factions.

On Tuesday, the candidates attended their second live televised debate to touch upon a wide range of topics from the country's ailing economy and the fragile nuclear deal to widespread corruption and women's rights. Yet as seen in the first debate, the nominees failed to propose working solutions for the country's grievances. Instead, they used the stage to launch ferocious attacks and exchange diatribes.

After the two moderate candidates sharply criticized Raisi in the first debate, they received a harsh warning from Ayatollah Mohammad Ali Movahedi Kermani. Without naming the two, the ultraconservative cleric said they could still be simply taken off the race should they cross the red lines.

ISPA's poll also dug into if the first debate changed calculations ahead of the vote. It indicated that the debate failed to encourage undecided voters. The survey further found that 70% of Iranians above the age of 18 did not even watch the televised debate despite the extensive coverage by a multitude of Iranian TV and radio stations.