In his meetings this week in Washington, IDF chief Aviv Kochavi reiterated Israeli warnings against the United States rejoining the Iran nuclear agreement. 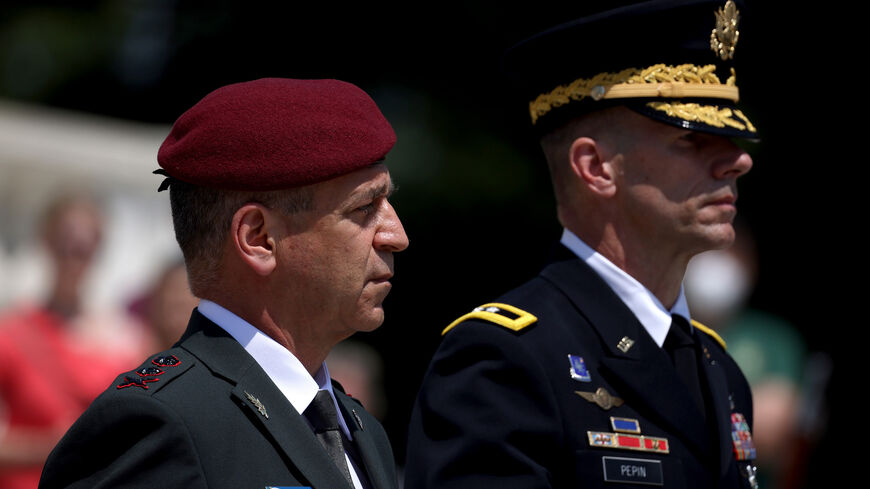 Aviv Kochavi, chief of general staff of the Israel Defense Forces, participates in a wreath-laying ceremony at the Tomb of the Unknown Soldier on June 21, 2021, in Arlington, Virginia. - Anna Moneymaker/Getty Images

Chief of Staff of the Israel Defense Forces Aviv Kochavi reiterated Israel’s position against the United States rejoining the Iran nuclear deal during a meeting in Washington. Yesterday Kochavi met with US national security adviser Jake Sullivan and other top American defense officials including Brett McGurk, the National Security Council’s coordinator for the Middle East and North Africa, and Cara Abercrombie, the special adviser to the president on defense affairs. The IDF head voiced warnings over the “failures of the current nuclear deal,” urging his counterparts to explore alternative methods to prevent Iran from obtaining nuclear weapons. An IDF statement read, “Throughout the day, the chief of staff has presented possible ways to prevent Iran from obtaining military nuclear capabilities during his meetings.”

Kochavi arrived to Washington June 20, and is scheduled to go back home tomorrow, June 25. Upon arrival, he was welcomed by US Secretary of Defense Lloyd Austin and Chairman of the Joint Chiefs of Staff Mark Milley. Kochavi met with the US national security team and with US Central Command chief Frank McKenzie and US Special Operations Command head Richard Clarke. He is set to meet CIA director William Burns and National Intelligence director Avril Haynes this afternoon.

Unconfirmed reports said yesterday the United States was seeking to extend the time between rounds of negotiations with Iran in order to confer with the new Israeli government on the issue and better understand its positions. Addressing the new cabinet on June 20, Prime Minister Naftali Bennett said of the presidential elections in Iran, "[Ebrahim] Raisi's election is, I would say, the last chance for world powers to wake up before returning to the nuclear agreement, and understand who they are doing business with."

Still, other reports on the policies of the new government said that it is putting in place a dialogue channel with Washington on the issue of Iran and that it plans to send security experts to Washington to discuss ways to better enforce the deal's limitations on the Iranian nuclear program and which sanctions should be kept in place if the United States indeed returns to the deal.

Last week reports held that Bennett intends to nominate retired Gen. Amos Yadlin, considered Israel’s top expert on the Iranian file, as the country’s new national security adviser. Warning of Iran's nuclear intentions, Yadlin said this morning, "It is the right of Americans to try the diplomatic path as a first priority, but they should commit and give us guarantees that if the diplomatic path does not work then there are other paths and we will work together." Referring to a New York Times report on a drone attack against an Iranian facility manufacturing centrifuges, Yadlin said, "There is a message here for everyone, the Americans and the Iranians: Israel is not part of this agreement; it did not sign it. Israel thinks it is bad and it reserves the right, in matters of Israel's defense, to do what it thinks is right. There is no change from the previous policy here."

The focus of Kochavi’s meetings was evidently the Iranian file, but he also discussed with his counterparts other regional issues. Kochavi reportedly spoke with Sullivan about persistent tensions in Gaza, assessing that another round of conflict in the Strip was only a matter of time. A report by Israel’s public broadcaster Kan said Kochavi referred specifically to the difficulties in the ongoing negotiations with Hamas and with its leader Yahya Sinwar. Hamas is demanding that Israel allow Qatar to deliver large sums of monetary aid to the Strip, while Israel says it won’t enable large-scale reconstruction until Hamas returns two Israeli civilians held in captivity and the remains of two fallen IDF soldiers.

While in Washington, Kochavi also met with Gilad Erdan, Israel’s ambassador to the United Nations and to the United States. The two men discussed in particular Israeli concerns regarding Hezbollah and the ways the UN and its peacekeeping force in Lebanon can help rein in the group. A statement issued by the IDF said, “The two discussed the need to enforce and effectively fulfill the mandate of the [United Nations Interim Force in Lebanon] in light of the renewal process of the mandate in the UN later this year. The chief of staff stressed that for years the state of Lebanon has lost control of its security policy and completely abdicates its responsibility to uphold resolution 1701, as the Hezbollah terrorist organization effectively runs Lebanon’s security policies.”