The visit of IDF Chief of Staff Aviv Kochavi to Paris offered Jerusalem the possibility to discuss the security situation in Lebanon, and how France can play a constructive role against the Hezbollah threat. 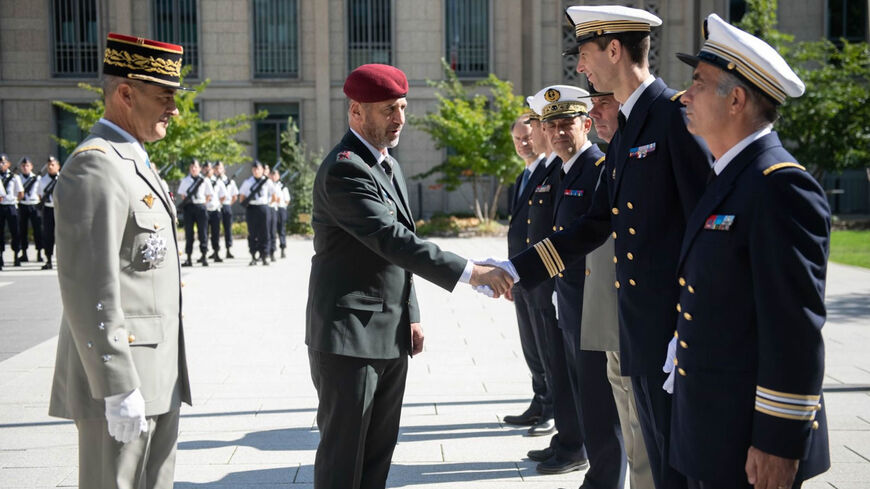 PARIS — Israel Defense Forces (IDF) Chief of Staff Aviv Kochavi concluded his visit to Europe today. Kochavi traveled at the beginning of the week to Poland for a three-day visit, continuing on the evening of Sept. 20 for a two-day visit to France. Poland and France are both members of NATO. The visit of Kochavi comes as Israel — a nonmember partner of NATO — tries actively to develop its cooperation with the organization.

Israel’s diplomatic relations with Poland had deteriorated in the past year and a half, after the Polish parliament approved last year legislation limiting the ability of Jews to recover property seized by Nazis in Poland during World War II. Then-Foreign Minister Yair Lapid criticized openly and repeatedly Polish leadership over the issue. With this crisis, and with the spread of the coronavirus pandemic, Israel practically halted visits of Israeli high school students and of IDF soldiers to Polish concentration camps. The visit of Kochavi this week signaled Jerusalem’s willingness to revive these visits.

Reports said that the role played by Poland and the Polish army in supporting Ukraine contributed to Jerusalem’s willingness to rediscuss issues with Warsaw. Israel’s humanitarian aid to Ukraine is transferred through Poland, and cooperation between administrations of both countries has been efficient and constructive. The Polish army, it was suggested, is keen to cooperate with Israel on issues such as intelligence sharing and technological innovations.

Kochavi met in Warsaw with Polish army chief Rajmund Andrzejczak, discussing operational and intelligence cooperation between the two militaries and plans for their expansion. Still, it was the French part of Kochavi’s European tour that focused on Israel’s deep security interest, namely Hezbollah in Lebanon and the Iranian file.

On Sept. 21, Kochavi met with French Chief of Staff Gen. Thierry Burkhard and with senior officials in the French armed forces. This morning, Kochavi met at the Elysee Palace with the military adviser to the French president, Adm. Jean-Philippe Rolland.

"The strengthening relationship between the French army and the IDF are important for regional stability. We presented our French colleagues with intelligence that proves that the terrorist army Hezbollah has recently been increasing its negative activities, in a way that creates an ever-increasing risk of escalation, trying to endanger Israel, but in practice also [endangering] Lebanon and its citizens. Hezbollah has 'taken the citizens of Lebanon hostage,' so to say, making cynical use of civilian infrastructure, houses and residential buildings that could be attacked by the IDF if and when necessary," said Kochavi during his Paris visit.

The IDF chief called on the international community to demand the Lebanese government to exercise its security control against Hezbollah. "Hezbollah's actions as a terrorist organization are an example of how it prevents positive change in Lebanon, preserving instead a failing system. In practice, this serves Iranian interests in the region. We are working hard against Iran's establishment in the Middle East. The attempts to harm the State of Israel, in any arena, will be met with a sharp response or a preliminary initiative," warned Kochavi.

The IDF spokesperson said today, that at their meeting at the Elysee Palace, Kochavi and Rolland conducted a strategic/operational dialogue on the challenges the Middle East is facing, especially Iran, which presents both a regional and a global problem. The two men also dived into the security situation on the Lebanese border, and the armament of Hezbollah. They discussed French influence in the region, advancing mutual security interests and promoting cooperation between the armies.

Israeli and French security agencies, armies included, have a long history of close ties and cooperation. These continued even at times when diplomatic ties between Paris and Jerusalem became complicated. Jerusalem currently considers Paris as hawkish on the Iranian nuclear portfolio. In other words, Paris stands at the forefront of the Western effort to conclude a new Joint Comprehensive Plan of Action with Tehran. French President Emmanuel Macron and his associates said as much on several occasions in recent days.

French authorities are well aware of the Israeli position on Iran. Still, the visit of Kochavi offered Israel yet another occasion to insist on its interpretation of the intelligence on Iranian nuclear activities, which both countries are familiar with. The Israeli delegation highlighted also Iranian growing involvement and supports in plots to attack Israelis abroad.

That being said, and judging by Kochavi’s statements while in Paris, the crux of his visit was the Lebanese file. Israel is in the midst of American-mediated negotiations with Lebanon over the demarcation of maritime borders and the ownership of the maritime zone where the Israeli Karish natural gas rig is located. Sources in Jerusalem have estimated this week that would it not be for Hezbollah Secretary-General Hassan Nasrallah’s efforts to fend off a deal, an agreement could be concluded in a matter of weeks.

In parallel, Jerusalem is concerned also on Hezbollah’s large rocket arsenal and precise-missile project, which could be turned against both civil and military Israeli targets.

Jerusalem believes that Paris could play an important role in this regard. Paris is the penholder of United Nations Resolution 1701 concerning the situation in Lebanon and the presence of UNIFIL peacekeeping forces there. UNIFIL’s mandate (Resolution 2433) is renewed each year, for a year, and France has significant influence over the wording of the renewal.

Israel has been claiming for a long time that the Lebanese army fails to assure UNIFIL’s freedom of movement in the country. In fact, reports have stated in the last couple of years that Hezbollah militants come into UNIFIL positions, mocking and humiliating the peacekeeping soldiers.

More so, even if France is not officially part to the trilateral talks between Israel, Lebanon and the United States, its influence within Lebanese leadership — especially its ties with President Michel Aoun — could play an important role in bringing the sides closer. American and French assistance to Lebanon could also be leveraged to pressure Lebanese authorities against Hezbollah’s hold of the country.

French influence in Lebanon comes also in other forms. French TotalEnergies holds exploitation rights vis-a-vis Lebanese authorities over the disputed maritime area. As long as the bilateral dispute is not resolved, TotalEnergies will not engage in any operations there. On Sept. 6, Aoun said that TotalEnergies could help Lebanon solve maritime demarcation issues with Israel.

Speaking at a military ceremony Sept. 21 in the north of Israel, Defense Minister Benny Gantz referred to reports over Tehran offering Lebanon to send 600,000 tons of fuel over the next five months, to alleviate the country’s economic and energy crisis. Kochavi warned against Hezbollah's and Iran’s hold over Lebanon, saying, “Iran, through Hezbollah, is trying to buy Lebanon by supplying fuel, repairing the electricity system and building power plants. Lebanon’s energy dependence on Iran can eventually lead to the establishment of Iranian bases on Lebanese soil and the destabilization of the region — and the citizens of Lebanon are the ones who will pay the price."

With that, Israeli military and diplomatic sources emphasize that Jerusalem’s clear interest is in helping Lebanon overcome its economic crisis.