On his last European tour stop, Israeli President Reuven Rivlin met in Paris with French President Emmanuel Macron, campaigning against Hezbollah’s entrenchment in Lebanon and against the Iranian nuclear threat. 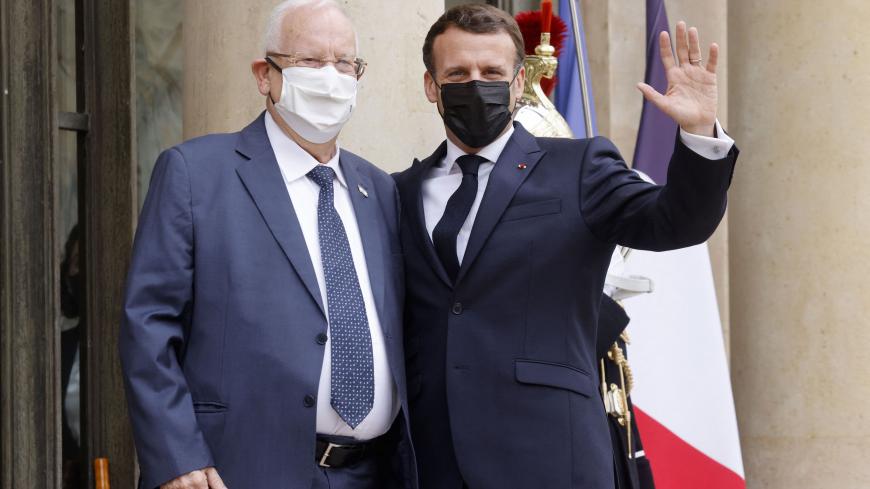 French President Emmanuel Macron (R) and Israeli President Reuven Rivlin pose and wave as they meet for a working lunch, followed by a joint press conference, at the Elysee Palace in Paris, on March 18, 2021. - LUDOVIC MARIN/AFP via Getty Images

PARIS — President Reuven Rivlin met today with French President Emmanuel Macron at the Elysee Palace. Macron greeted Rivlin warmly, noting that their friendship has been forged in mutual visits over the past few years. The two men had last met a year ago when Macron visited Israel, and also the year before when Rivlin arrived in France on a state visit.

Paris was the third and last stop of the Israeli president in a three-day European tour that also included Germany and Austria. But the French stopover was different. In Germany and Austria, Rivlin focused on the common battle against anti-Semitism, attending memorial ceremonies for Jews who perished in the Holocaust. He also focused on Jerusalem’s campaign against the Iranian nuclear threat and Jerusalem’s campaign against the recent decision by the International Criminal Court’s prosecutor, Fatou Bensouda, to launch a probe against Israel.

All those issues also came up in his meeting with Macron, but the major issue was certainly that of Lebanon and Hezbollah.

Speaking at a joint press conference, Rivlin said, “We will not agree for an Iranian entrenchment in Lebanon through Hezbollah. We have no territorial dispute or any war with the Lebanese people. We want to be good neighbors. We hope that our friends, including our friends here in France, will continue demanding the Lebanese government take responsibility for Hezbollah’s terror actions committed on its territory and from its territory.”

Reportedly, Israel Defense Forces Chief of Staff Aviv Kochavi, who accompanied Rivlin on this trip, showed Macron maps of Hezbollah sites in Lebanon, insisting that Lebanon will pay dearly if Hezbollah opens war against Israel. Kochavi told Macron that Lebanon has become a captive of Hezbollah and that it no longer controls its own security policy. The Lebanese government is not implementing UN Security Council Resolution 1701 against the presence of armed militia on its territory, noted Kochavi. Diplomatic sources confirmed to Al-Monitor that Jerusalem is counting on Paris to transfer these messages to Beirut.

Macron also referred to this issue extensively, noting at the press conference that the international approach to Lebanon would surely have to change in the coming weeks. “We must do everything possible to prevent a collapse of the country (Lebanon) — in other words, accelerate the formation of a government and the necessary reforms,” stated Macron.

While Jerusalem hopes for Paris to assist on the Lebanese front, things are more complicated on the Iranian file. Israeli leadership knows that France has been coordinating with the Biden administration the renewal of talks and is pushing for a new agreement. Still, Paris shares at least partly a vision promoted lately by several top Israeli security officials for a comprehensive long-term agreement with Iran that would include limitations on its ballistic activities and prohibit support of global terrorism.

Macron expressed his concern over recent reports on Iran's nuclear activity. “I will say it very clearly, and with no ambiguity: Iran must stop escalating an already serious nuclear situation by accumulation violations of the Vienna agreement. … France is entirely mobilized for a credible process that would enable finding a solution to this crisis, which means going back to control, to supervision, of the nuclear program, while integrating, as we have been demanding since 2017, also control of Iranian ballistic activity in the region.”

With that, Rivlin can certainly note a few diplomatic achievements at the Elysee. Clearly, Paris is reluctant to support Israel in its campaign against the ICC. Rivlin referred to this issue in his remarks to the press, but Macron avoided it completely. On the other hand, the dialogue on Lebanon and Iran could certainly bear some fruit in the coming months. Macron is obviously ready to listen to what his friend Rivlin has to say.