President Reuven Rivlin arrived today in Germany, his first stop on a three-day European tour focused on the Iranian threat and the ICC probe of Israel. 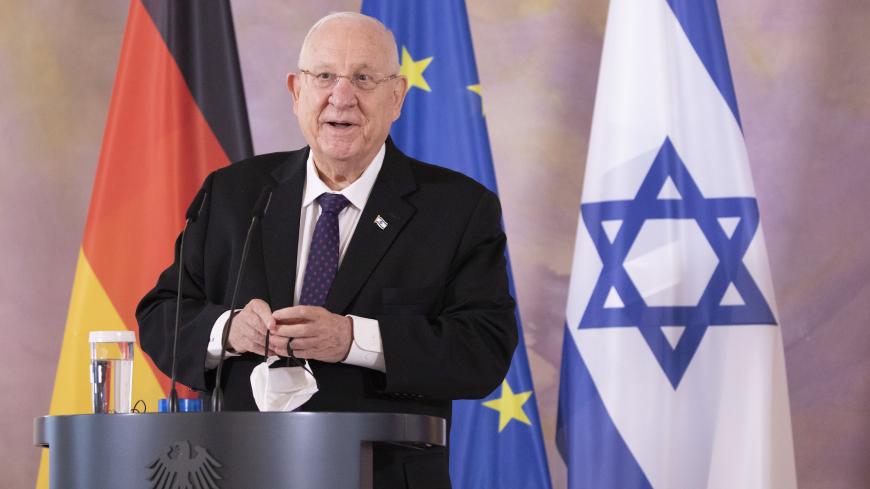 President of Israel Reuven Rivlin speaks during a press conference with German President Frank-Walter Steinmeier (not seen) at the Presidential Bellevue Palace during a visit to Germany on March 16, 2021, in Berlin, Germany. -

Israel’s President Reuven Rivlin met today in Berlin with his German counterpart, Frank-Walter Steinmeier. Speaking at a joint press conference, Rivlin thanked Germany for its commitment to Israel’s security, calling on all European countries to stand by Israel on the Iranian nuclear file, on the International Criminal Court (ICC) probe against Israel, and on the issue of Israeli civilians and bodies of IDF soldiers held by Hamas in Gaza.

“At this time, the international community must stand firm and uncompromisingly against Iran's nuclear intensification and its support for terrorist organizations that threaten Israel and the region. We trust our friends in Europe to stand by us in our fight against the misuse of the International Court of Justice in The Hague, against our soldiers and citizens," said Rivlin.

He further argued that while the balance of powers in the region is changing, following the Abraham Accords, Iran keeps threatening its neighbors.

Berlin is the first stop on a three-day tour by the president in Europe. Tomorrow, he will fly to Austria, where he will meet with Austrian President Alexander Van der Bellen. Both men will then participate in a memorial ceremony for Jews who perished in the Holocaust. Rivlin will finish his tour on Thursday, meeting French President Emmanuel Macron at the Elysee Palace in Paris.

This presidential tour is exceptional on several levels. Rivlin was invited a while ago by his German and Austrian counterparts to visit, yet the coronavirus pandemic made things complicated. With the skies now opening, the decision by International Criminal Court Prosecutor Fatou Bensouda at the beginning of March to open a probe against Israel certainly pushed for the visit to take place rapidly. Apparently, this was also the reason Paris was added to the tour. Rivlin had traveled to France in January 2019 for an official state visit, where President Macron received the president and his wife, Nechama (now belated), with honors, for a festive 200-guest dinner. This second visit was set up for a good reason.

The two main themes of the visit — Iranian nukes and the ICC probe — explain the participation of Israel Defense Forces Chief of Staff Aviv Kochavi on this trip. Kochavi joined the president for the meeting this afternoon with Steinmeier for an update on the regional security situation. Kochavi is also expected to join the president for his meetings with the Austrian and French heads of state. The only professional meeting scheduled for Kochavi during this trip is with his German counterpart, Gen. Eberhard Zorn.

Still, beyond briefing European leaders on the security challenges faced by Israel, the mere presence of Kochavi on such a trip sends a clear message. Israel will let no one, not even the ICC, probe Israeli officers.

President Rivlin is considered very popular in Israel and has taken the cause of Israeli Arabs and against discrimination on several occasions. He was also one of the first Israeli officials to react to Bensouda’s decision, describing it as scandalous and stating, “We will not accept claims against the exercise of our right and our obligation to defend our citizens. The State of Israel is a strong, Jewish and democratic state that knows how to defend itself and investigate itself when necessary. We are proud of our soldiers, our sons and daughters, the essence of our people, who stand guard for their country generation after generation, a defensive wall against all those who seek our harm. We will stand guard to ensure that they are not harmed because of this decision.”

Indeed, before embarking, the president came back to this issue, saying, “This important diplomatic visit I am taking, together with the chief of staff, is highly significant at this time. … It is important to ensure that the international community is ready, determined and uncompromising, to oppose Iran’s nuclear plans. … My agenda for this trip also includes the misuse of the International Criminal Court against our soldiers and citizens.”

For Rivlin to take on the ICC reflects his understanding that a great majority of Israelis are united against such a probe. By bringing Kochavi along on this trip, Rivlin tells the international community: Here is our top soldier, standing by my side, on European soil, under my protection.