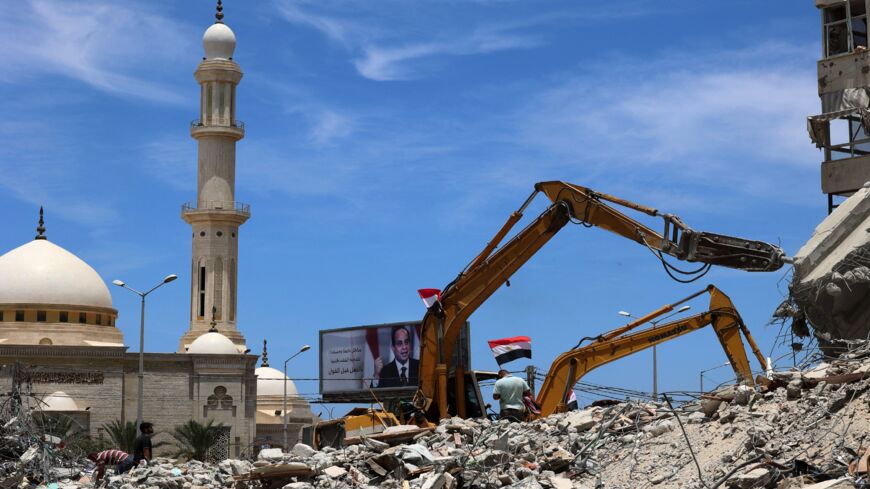 During a press conference in Gaza on June 9, UN Humanitarian Coordinator for Palestine Lynn Hastings called on the international community and international institutions to exert more efforts to help the people of the Gaza Strip.

Hastings said that goods, building materials and aid currently entering Gaza only account for 50% of the quantities that would flow into Gaza before the latest Israeli escalation.

Israel continues to partially close the crossings as part of its pressure on Hamas.

Mohammed al-Askari, director general of the Ministry of Public Works and Housing in Gaza, told Al-Monitor, “Palestinian companies and manpower will carry out the full reconstruction operations in the Gaza Strip, and the role of Egyptian companies and the Egyptian side will be supervisory and supportive.”

Askari, who attended a special meeting between traders, contractors and representatives of the ministries of public works from Egypt and Gaza in Cairo to discuss the reconstruction mechanism, said that the technical meetings in the Egyptian capital identified four main tracks for the reconstruction of Gaza.

“The first track includes the infrastructure rehabilitation and reconstruction. The second includes the rebuilding of towers and houses that were either completely or partially destroyed by the occupation. The third consists of building 10,000 new housing units for people with limited income and the poor, and the fourth consists of establishing two bridges in the most vital areas that witness traffic congestion in Gaza,” he said.

Although the Egyptian role in the reconstruction process seems to be clear, it still faces obstacles, as it has thus far been limited to sending some equipment and engineering teams on June 13 to remove the rubble left by the recent war, which is estimated at 200,000 to 300,000 tons, a source from the Ministry of Public Works told Al-Monitor on condition of anonymity.

According to the Times of Israel newspaper, Israel asked Egypt on June 10 to prevent the entry of cement, among other building materials, into Gaza through Egypt. Gaza is currently dependent on the Salah al-Din commercial gate on the border with Egypt to import cement, whose flow Israel has prohibited since the cease-fire along with other building materials.

Israel Today quoted public broadcaster Kan as saying that goods flow through the Salah al-Din gate at the Rafah border crossing between Gaza and Egypt three days a week without any monitoring, and among the goods that were reported to have entered Gaza through this crossing are cement, building materials and fuel.

The newspaper added that Israel has informed Egypt it does not mind the rubble removal assistance provided by Egyptian engineering teams to Gaza in the wake of the recent Israeli army air raids, but it does not want Egypt to repair military tunnels.

Meanwhile, the Lebanese newspaper Al-Akhbar cited on June 12 sources in the Palestinian Authority (PA) as saying that the PA in Ramallah sent earlier this month a government delegation to Cairo to convey a letter of objection to the way the Egyptians are managing the reconstruction file, while turning a blind eye to Ramallah and hosting a government delegation from Gaza last week. This is seen as a clear disregard for the Palestinian government in Ramallah and a boost to Hamas and the factions that oppose the PA’s interference in the process, the PA sources said.

Mustafa Ibrahim, a political analyst who works at the Independent Commission for Human Rights in Gaza, told Al-Monitor, “There is an internal Palestinian and international dispute over who will undertake the reconstruction process in Gaza, as Israel links the issue to the release of Israeli soldiers held by the resistance in Gaza, thus impeding the progress of the indirect negotiations between Hamas and Israel on a swap deal and the Gaza reconstruction brokered by Egypt.”

“No international conference has been held to determine the reconstruction and funding mechanisms, let alone to discuss the internal political developments related to the Palestinian reconciliation,” he added.

Ibrahim believes that the PA’s objection to Egypt stems from its belief that Egypt is strengthening the role of Hamas at the expense of the PA, which was unable to provide logistical and financial support to the citizens of the Gaza Strip during the war.

Mustafa al-Sawaf, a political analyst close to Hamas and former editor-in-chief of the local Felesteen newspaper, told Al-Monitor, “Although the reconstruction mechanism is not yet clear, more than one party is expected to be leading it due to the multiplicity of donors who include Qataris, Kuwaitis and Egyptians.”

“The PA is trying to control the funds to spend the money as it deems appropriate, similar to what happened with the reconstruction funds after the 2014 war that were used to cover some items in the PA’s state budget,” he said.

While the internal Palestinian dispute over who will be leading the reconstruction lingers, Israel continues to restrict trade and imports into Gaza, thus hindering any imminent start of this process.

In the meantime, Palestinians await to see how the new Israeli government will deal with reconstruction, an issue it keeps linking to a prisoner swap deal.