The Palestinian Authority wants to handle the reconstruction of the Gaza Strip through international funds, which Hamas rejects. 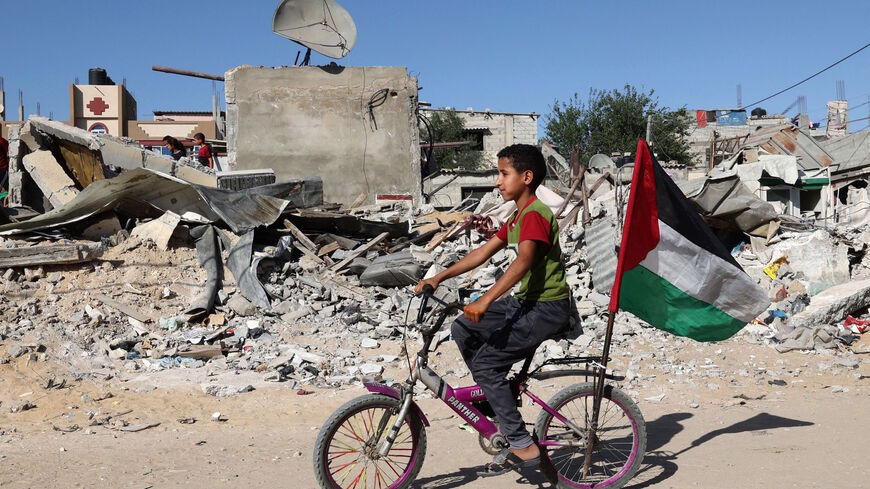 A Palestinian child rides his bicycle in front of the ruins of a building destroyed during recent Israeli bombing in Rafah, in the southern Gaza Strip, May 26, 2021. - SAID KHATIB/AFP via Getty Images

Immediately after the Israeli campaign against the Gaza Strip ended May 21, Palestinians began tallying the effects of the destruction that befell them. Naji Sarhan, undersecretary of the Ministry of Public Works and Housing for the Hamas-controlled government in Gaza, announced during a press conference May 20 that 1,800 housing units were completely demolished, 16,800 were partially destroyed, while 120,000 Palestinians were displaced amid difficult economic and humanitarian conditions.

In addition, five large residential towers in central Gaza City were completely destroyed, along with 74 government facilities, while 66 schools were damaged, three mosques were demolished, 40 others were damaged, and one church was damaged, according to Sarhan.

Al-Monitor learned from government sources in Gaza that the government “reached out to international agencies, donor institutions and partners in the reconstruction process to relieve the suffering of those affected, and distribute $2,000 to the owners of each totally demolished housing unit, and $1,000 for owners of uninhabitable units, in cooperation with the Qatari Committee for the Reconstruction of Gaza and the Ministry of Social Development.”

Salama Marouf, head of the Hamas-controlled government media office in Gaza, told Al-Monitor, “Once the fighting ended, we contacted the governmental, civil and private committees concerned with reconstruction to monitor and supervise the arrival of donor funds, and these committees are willing to handle the reconstruction process. Gaza has honest economic [bodies] that are able to communicate with international donors without the tutelage of the Palestinian Authority [PA], which failed in such task after the wars of 2008, 2012 and 2014, since much of the reconstruction funds illegally ended up in the [PA’s] budget.”

In recent days, Gaza has witnessed unremitting efforts to establish the so-called National Council for Reconstruction to manage and accelerate the flow of funds into the coastal enclave. The council will be made up of governmental and private agencies and will be financially and administratively independent from the PA. Al-Monitor learned that the council’s members will include representatives from the private sector and civil society organizations, a team of consultants and engineers, and experts in recruiting financial support. The announcement of this council’s establishment is expected in the coming days.

However, a Palestinian government official in Ramallah told Al-Monitor on condition of anonymity, “The only authority responsible for reconstructing Gaza is the PA, and the world is dealing with it officially, regardless of other, illegal new entities.”

Nasr Abdel Karim, professor of economics at Birzeit University, told Al-Monitor, “Accelerating the reconstruction process in Gaza requires an end to the competition over which the Palestinian party will be in charge, by forming a temporary council that represents the affected people and government ministries from both Gaza and the West Bank, and defining administrative references to receive the money from donor countries. This council would negotiate with the donor countries in the name of the Palestinians to mobilize financial resources. It may be more reliable for these countries than Hamas or the PA, both of which are required to amend their current budget for 2021 by adding an item related to the reconstruction of Gaza.”

Although days have passed since the fighting in Gaza ended, Minister of Public Works and Housing in the Ramallah government Mohammad Ziyara, who is expected to manage the reconstruction process, has yet to visit the Gaza Strip to assess the destruction. The delay of this visit was met with great condemnation.

Samir Abdullah, former Palestinian labor and planning minister in Ramallah and senior researcher at the Palestine Economic Policy Research Institute - MAS, told Al-Monitor, “Reconstruction will not be an easy file. Rather, it will face several obstacles, mainly the decline in the international donors’ trust in the transparency of the Palestinian parties to which the reconstruction funds are directed. This requires forming a technical staff representing the specialized sectors, communicating with donor countries and unifying work in the relevant ministries to encourage countries to donate. However, many donor countries have some reservations about the PA being in charge of this file, and they may seek to deal directly with the affected Palestinian groups in Gaza.”

On May 26, Qatar’s Foreign Minister Mohammad bin Abd al-Rahman Al Thani said in a tweet that his country will allocate $500 million to support Gaza’s reconstruction efforts. The announcement came after Qatari Emir Tamim bin Hamad Al Thani called Palestinian President Mahmoud Abbas on May 23 and discussed the reconstruction of Gaza.

Also on May 23, Palestinian Minister of Foreign Affairs Riyad al-Maliki announced during a press conference with his Iraqi counterpart Fuad Hussein in Baghdad that the Palestinian leadership is working on the reconstruction of Gaza, rallying the international community to partake.

In a televised speech May 21, US President Joe Biden called on the international community to help rebuild Gaza, in full partnership with the PA, not with Hamas, pledging to hold an international conference for this purpose. US Secretary of State Antony Blinken said following a meeting with Abbas in Ramallah May 25 that Washington will work to mobilize international support for the reconstruction of Gaza. He also announced plans to provide nearly $40 million in aid to the Palestinians, including $5.5 million in emergency assistance to the Gaza Strip.

Muhammad Abu Jayab, editor-in-chief of Al-Eqtesadiya newspaper in Gaza, told Al-Monitor, “There is an Arab and international tendency to contribute to the reconstruction of Gaza, by pumping funds through committees affiliated to each country, similar to the Qatari Committee [for the Reconstruction of Gaza]. So there might be a Kuwaiti, Saudi and Emirati committee to be established inside Gaza, to avoid conflict with the PA or Hamas. The funds are ready — especially those donated by the Gulf and European countries — and Hamas was informed of this during the cease-fire talks. The only issue is when the reconstruction process would actually start and the mechanism for spending these funds — far from the PA’s attempts to get its hands on them — as it does every time.”

Osama Kahil, head of the Palestinian Contractors Union in Gaza, told Al-Resalah newspaper May 2 that he rejects the PA’s supervision of the Gaza reconstruction process, because its sterile bureaucratic procedures delayed the reconstruction of Gaza after the 2014 war by seven years.

The reconstruction process is expected to encounter several obstacles, perhaps the most important of which is the problem facing donors in dealing with the PA in the West Bank, or the Hamas-affiliated government in Gaza. Meanwhile, Hamas accuses the PA of impeding the reconstruction, while many are concerned about in-kind donations from countries and institutions, especially construction materials, not reaching the Gaza Strip, since Egypt has yet to permanently open the Rafah border crossing.