Palestinian division is deepening further, with disputes emerging between the PA and Hamas over which party will be responsible for handling the Gaza reconstruction process. 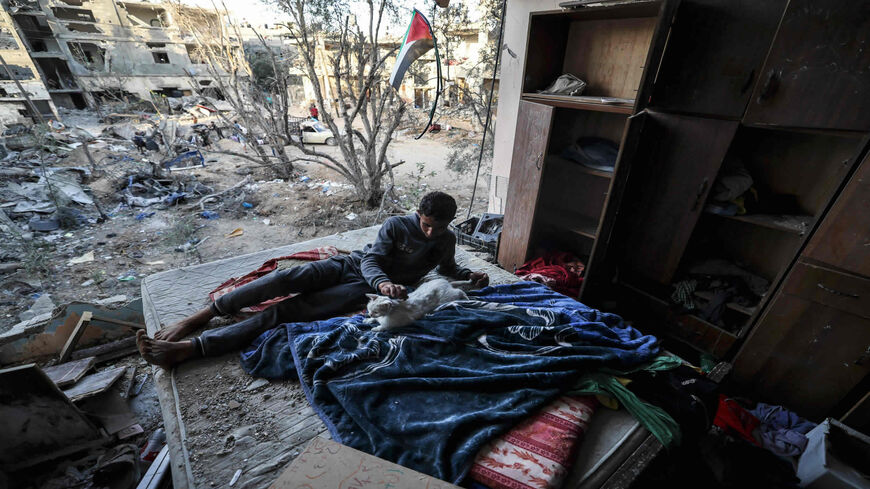 GAZA CITY, Gaza Strip — A new episode of Palestinian political division between the Palestinian Authority (PA) and Hamas has reared its head, this time through the reconstruction of the Gaza Strip file. Two separate committees — the first affiliated with the PA, the second with the Hamas-run Ministry of Public Works and Housing in Gaza — are working to limit the damages inflicted by the recent Israeli war on Gaza between May 10 and May 21, amid a conflict between the two parties over the supervision of the reconstruction process.

The PA, with the support of the international community — United States, European Union and United Nations — is seeking to pump donor funds into its treasury to oversee the reconstruction of the Gaza Strip, amid US and Israeli insistence on keeping Hamas away from the reconstruction process.

Minister of Social Development in the Ramallah government Ahmed Majdalani said in statements to Egyptian media June 2 that a national committee affiliated with the PA has begun assessing the damages caused by the Israeli aggression on Gaza.

However, Naji Sarhan, undersecretary of the Hamas-run Ministry of Public Works and Housing in Gaza, told Al-Monitor that his ministry’s staff have already completed 40% of the assessment process, with losses estimated at $150 million so far, and the total cost of the damage is likely to reach $400 million.

He explained that the number of completely demolished housing units amount to 1,800, while about 16,800 units were partially damaged. In addition, 151 industrial facilities, 500 commercial facilities, 540 agricultural facilities and 120 government facilities were destroyed, he said.

Sarhan stressed that his ministry’s staff follow a transparent mechanism to assess damages, as it launched an online platform in cooperation with the United Nations Relief and Works Agency for Palestine Refugees and the United Nations Development Program for those affected to register their data and list their damages.

He noted that his ministry “is ready to reconstruct the Gaza Strip within one year if the necessary funds and capabilities are available.”

Majdalani, a member of the PLO’s Executive Committee, told Al-Monitor, “The PA is the only party that will undertake the reconstruction of the Gaza Strip in its capacity as the legitimate representative of the Palestinians to the international community.”

He said, “Not even one dollar of donor money shall reach Hamas. Hamas is a Palestinian party, and the aid should be channeled to the state and its official institutions and not to a specific party."

Israel fears that the money of international donors will go to Hamas, which will use it to dig more tunnels and manufacture more rockets.

Since the end of the Israeli aggression on Gaza on May 21, Ismail Haniyeh, head of Hamas' political bureau, made a series of phone calls with leaders and officials in Arab and Islamic countries to fill them in on the latest Palestinian developments and discuss efforts to rebuild Gaza. Chief among these are Morocco, Qatar, Kuwait, Lebanon, Iran, Malaysia and Iraq.

Meanwhile, PA President Mahmoud Abbas called on Prime Minister Mohammad Shtayyeh to head to the Gulf, namely Kuwait, Oman and Qatar, along with Foreign Minister Riyad al-Maliki. The tour started May 31 with the aim of garnering Gulf support to the PA treasury for the reconstruction of the Gaza Strip.

A government source familiar with Shtayyeh’s visit to the Gulf states told Al-Monitor on condition of anonymity, “The countries that Shtayyeh visited refused to send grants to the PA treasury for the reconstruction of Gaza.”

The source explained that these countries suggested forming committees for each country, similar to Qatar's Gaza Reconstruction Committee that has been working for years in the besieged enclave, or forming a Palestinian committee that includes the government, factions and civil society in order to send reconstruction funds to it.

He said that the PA is disappointed by these countries’ refusal to send money.

Hamas leader Yahya Moussa told Al-Monitor that the PA should not be unilaterally taking over the supervision of the Gaza reconstruction.

“After the Israeli war on Gaza in 2014, the PA seized 50% of the donor funds that were allocated for the reconstruction of Gaza to support its government budget, of which nothing was spent on the Gaza Strip,” Moussa said.

He explained that his movement supports the formation of a national committee that includes representatives from the government, the factions and civil society to oversee the reconstruction of Gaza.

Ahmed al-Mudallal, a leader in the Islamic Jihad movement, which fired hundreds of rockets at Israel during the recent military confrontation, told Al-Monitor that his movement “rejects the PA’s supervision of the Gaza reconstruction process, and it also refuses to return to the United Nations mechanism for the reconstruction of Gaza.”

He stressed the need to agree on the formation of a national body capable of taking charge of the reconstruction of the Gaza Strip, and the need for the Palestinian factions to have a supervisory role over this body.

Osama Kahil, head of the Palestinian Contractors Union in Gaza, concurred with the leaders of Hamas and Islamic Jihad saying that he is against both having the PA take over the reconstruction of Gaza and against the return to the UN’s so-called Gaza Reconstruction Mechanism.

“In order to rebuild the Gaza Strip without delay, we want construction materials to come from Egypt through the Rafah crossing without interruption,” he added.

Egypt is preparing to host next week the Palestinian factions in Cairo in order to develop a road map for the next phase and discuss a proposal to form a national unity government capable of undertaking the task of rebuilding the Gaza Strip.