With the United States and other states unwilling to work with Hamas, aid money is flowing into the Palestinian government coffers. 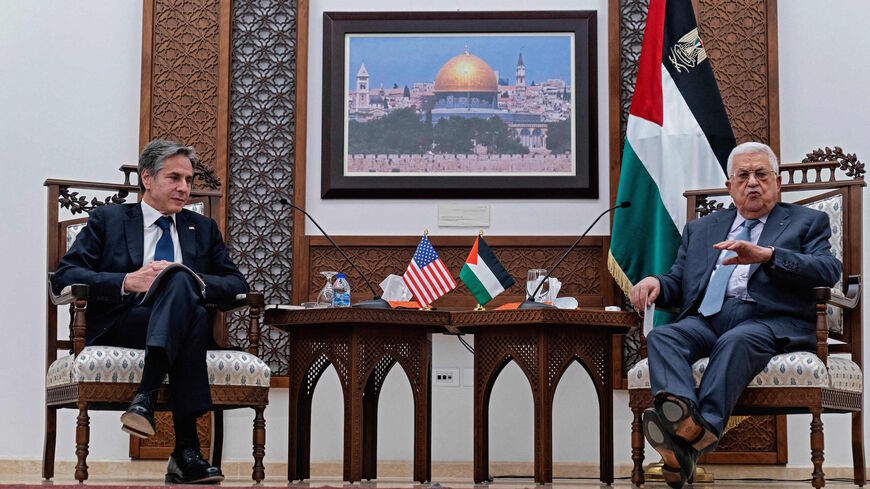 US Secretary of State Antony Blinken (L) and Palestinian President Mahmoud Abbas give a joint statement at the Palestinian Authority headquarters, Ramallah, West Bank, May 25, 2021. - Alex Brandon/POOL/AFP via Getty Images

After Palestinian President Mahmoud Abbas made his decision to postpone the legislative elections that he had earlier decreed, it at first appeared that his political career was doomed. Officially, his decision was made because Israel had refused to allow a few thousand Palestinians to use Israeli-run East Jerusalem post offices for absentee ballots. But few Palestinians bought the excuse and they felt he had made the decision as it became clear his own Fatah party would not be able to muster a majority of the 132 seats of the Legislative Council. This, in turn, would have meant he would have to create a coalition with some of his most hated former Fatah leaders, like Mohammed Dahlan and more recently Nasser al-Qudwa.

But as the stock of Abbas was hitting near bottom, a violent escalation took place in Jerusalem when Israeli troops repeatedly stormed into Islam’s third-holiest Al-Aqsa Mosque complex in an attempt to subdue the Palestinians. The rough Israeli efforts to put down the protests eventually were the reason that the Islamic Hamas movement in the Gaza Strip decided to join in by launching a few rockets that hit the outskirts of West Jerusalem. The unprecedented attacks from Gaza to Jerusalem resulted in the 11-day retaliatory airstrikes by Israel, a kind of near hell for both Gazans as well as Israeli communities in the south and in the Tel Aviv area. The main Israeli airports were shut down and most Israelis spent their nights in shelters.

The Palestinian resistance in the Gaza Strip raised significantly the public profile of Hamas and further damaged Abbas’ public standing as he stood by doing nothing.

During those 11 days of a vicious violent cycle, the international community, and especially the United States, all of a sudden started to pay attention to the Middle East’s longest conflict. However, the attention was not given to Hamas, but rather to the PLO leadership. Phone calls and visitors offered Abbas help. US President Joe Biden and his secretary of state called and the latter even visited Abbas. As a cease-fire decision was suggested, Abbas and his top aides began preparing for the post-conflict reconstruction phase.

The hatred and rejection to work with Hamas and its leaders was a bonanza for Abbas. Visitors, including US Secretary of State Antony Blinken, were to visit the region and — unlike during the Trump administration — they spoke to everyone but Hamas or their supporters. Blinken was dispatched by Biden to the region and met with all leaders as well as some Palestinian local civil society activists. He did not travel to Gaza nor did he meet with anyone closely aligned with Hamas. The United States and others said that the reconstruction funding should not go to or through Hamas, which the United States considers a terrorist organization and was specifically blamed for having started the latest round of violence, totally ignoring the context of what the right-wing Israeli government under the cornered Israeli Prime Minister Benjamin Netanyahu was doing.

The absence of legitimacy was not lost on Hamas, which did not take a solo victory run after the cease-fire but tried to put out a conciliatory and unifying message talking about the need for national unity. In an important post cease-fire press conference, Yahya Sinwar said that Hamas will not touch a single penny from the United States and other donors, and that they will make sure the reconstruction efforts face no bureaucratic or any other restrictions. And in an unexpected gesture toward the PLO leadership, Sinwar praised the late Yasser Arafat and his deputy Khalil al-Wazir.

The olive branch to the PLO was not lost on the Ramallah-based leadership. They were happy to host visitors and the potential of money flowing in to and through their beleaguered government coffers. But they also realized they need to produce a change in government to cover up for the election fiasco and the success of the Hamas rockets that shook up Israel.

The logical move for Abbas would be to establish a national unity government with Hamas, but this would certainly cause major problems as at least two members of the Quartet — the United States and European Union — are not even talking to Hamas. Russia and the United Nations are in contact with Hamas, but can’t easily convince the Americans to come around to their position. The issue is further complicated by the Egyptians who feel that they were successful in delivering the cease-fire and wanted to be the kingmaker in helping establish a new national unity government that includes some elements of Hamas or individuals that are close to the Islamic movement.

The Egyptians wanted to hold a set of meetings with all Palestinian leaders and wanted Abbas to speak at that meeting, but the latter, possibly feeling pressure from the United States, refused to come to Cairo. Eventually that effort appears to have failed and the leaders who arrived in Cairo June 9 were sent back as the national unity meeting failed to materialize.

The success of Hamas on the military front has given them a huge popularity surge, but has not yet been translated to any tangible power, especially in terms of their coveted desire for international legitimacy. No doubt Hamas will have to make some deep political compromises if they are to be allowed into a recognized national unity government. Certainly, Hamas in 2021 is much more mature politically than Hamas in 2007, and this might make their efforts to legitimacy more possible. Much will depend on the new Israeli government and on Washington. But for the time being it appears that Abbas seems to have pulled one more rabbit out of the bag in order to survive politically and remain as the main Palestinian reference point for the international community.