US officials are voicing support for a solution to the frequent cycles of violence between Hamas and Israel, one which may borrow from the UN resolution that ended the 2006 war with Lebanon. 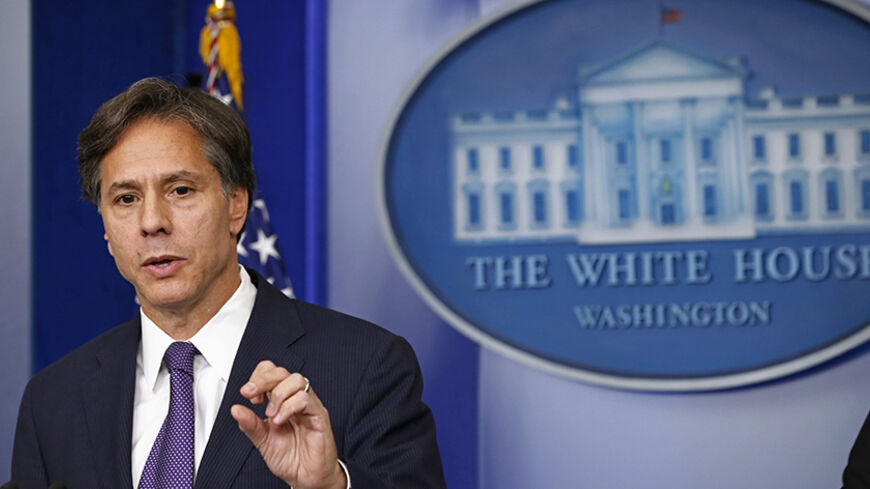 As US Secretary of State John Kerry shuttled through the Middle East to discuss how to bring and end to the war in Gaza, US officials voiced support for a longer-term plan, beyond a cease-fire, to exit the cycle of conflict between Israel and Hamas, the third in just six years.

"There has to be some way forward that does not involve Hamas having the ability to continue to rain down rockets on Israeli civilians," US deputy national security adviser Antony Blinken told NPR’s "Morning Edition" July 23. "One of the results, one would hope, of a cease-fire would be some form of demilitarization, so that … this doesn't … repeat itself."

Late Wednesday, Hamas political leader Khaled Meshaal, speaking in Qatar, said he would be prepared to accept a humanitarian truce for Gaza, but only on the condition that the siege of Gaza be lifted. "We are ready for a truce, but we are patient," Meshaal said, according to Bloomberg News.

But aides traveling with Kerry in the Middle East said rumors of an imminent truce were premature. A truce is not there yet, one Kerry aide said, as Kerry returned from Israel to Cairo late Wednesday, according to NBC's Andrea Mitchell.

Under an idea for ending the latest Gaza confrontation that is reportedly gaining traction in Israeli defense and diplomatic circles, the UN Security Council would pass a resolution authorizing the international community to oversee the partial demilitarization of Gaza, adapting the model that was used to end the war between Israel and Lebanon in 2006, Israeli media reports said.

According to the idea, “Israel, in coordination with the US and other allies, as well as with Egypt, the Palestinian Authority and the Arab League, will propose a Security Council resolution, similar to Resolution 1701 which ended [the second Lebanon] war in 2006,” Haaretz’s Barak Ravid reported July 23.

“Beyond a cease-fire, that resolution was intended to advance Israel’s diplomatic objectives such as the strengthening of Lebanon’s government’s hold on its southern district, the international isolation of Hezbollah, the demilitarization of southern Lebanon from rockets and heavy weaponry and the stationing of international observers on the border,” Ravid reported.

Kerry, in meetings with UN Secretary-General Ban Ki-moon and Israeli and Palestinian leaders July 23, expressed support for a more sustainable solution to the Hamas-Israel conflict, beyond the immediate goal of a cease-fire .

"The UN is wholeheartedly in this effort to try to see if we can advance not just a cease-fire but a sustainable process of going forward, which is very important," Kerry said ahead of a meeting with Ban Ki-moon in Jerusalem Wednesday.

“We have been talking about how to achieve an end to the current violence and an effort to try to not only have a cease-fire, but build a process that can create a sustainable way forward for everybody,” Kerry said, following a subsequent meeting with Palestinian President Mahmoud Abbas in Ramallah.

Praising Abbas’ recent “tireless” shuttle diplomacy, Kerry said Abbas is “encouraging people to do the responsible thing, which is to come to the table — not only [to] have a cease-fire, but then negotiate the immediate issues and the underlying issues.”

Kerry later met Israeli Prime Minister Benjamin Netanyahu at the Israeli Defense Ministry for two hours, but the two leaders did not speak to the media. Kerry later flew to Cairo, where Egypt’s military-led government has been hosting cease-fire talks.

Netanyahu has urged Kerry to reverse the US Federal Aviation Authority (FAA) July 22 decision to ban US commercial airlines from flying in and out of Israel's Ben Gurion Airport due to Hamas rocket fire. On Wednesday, however, the FAA reissued the ban for another 24 hours, but said it would review information it had requested from Israel. The pro-Israel lobby group AIPAC issued a statement Wednesday expessing concern about the FAA decision.

Regarding a possible UN/Lebanon-type plan for Gaza, former State Department Middle East adviser Frederic Hof said he was somewhat skeptical that the Netanyahu government would endorse a Lebanon-type solution as a satisfying outcome to the latest confrontation with Hamas.

Hof, now a scholar at the Atlantic Council, told Al-Monitor: "To me the likelihood of the [Israeli government] accepting a formula that it would use to justify the current round of fighting by saying 'Hey, the expense, the casualties and the criticism were all worth it because we got something just as good as we got in Lebanon eight years ago' is low.

"But I suppose Israeli agreement to lift the blockade of the Gaza Strip, work with the [Palestinian] unity government, facilitate Gazan economic reconstruction, etc. could be paired with a demilitarization understanding involving periodic UN inspections and memorialized in a UN [Security Council resolution]," Hof said. "I'm not aware of such a formula being at all attractive to the current GOI, but if I'm wrong then the idea being circulated may have some practical merit."