At least 21 people are dead, including a child, following a ballistic missile attack that Yemen's government said targeted a civilian gas station. 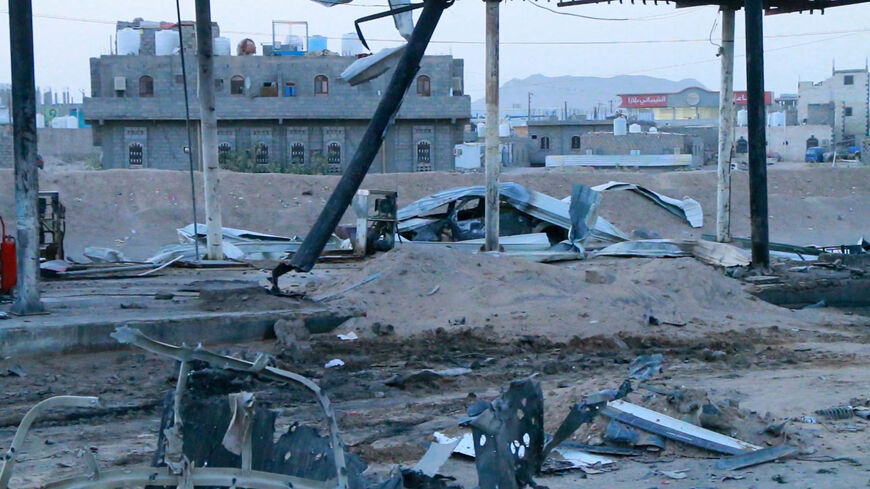 This picture taken on June 5, 2021, shows a destroyed vehicle at the scene of a missile strike at a petrol station in Yemen's city of Marib. - AFP via Getty Images

A five-year-old girl is among the 21 people who died in a ballistic missile attack on a gas station in the central Yemeni city of Marib that the government blamed on the Houthi rebels.

According to the Yemeni government-run SABA news agency, the Houthis also launched a bomb-laden drone that struck two ambulances as they arrived at the scene.

The Houthis denied targeting civilians. Houthi official Mohammed Ali al-Houthi said the rebels had bombed a nearby military base, not the gas station, and that the group would welcome an independent investigation.

The Iran-aligned Houthis are embroiled in a bloody civil war against a Saudi-led military coalition that intervened in 2015 on behalf of the internationally recognized government, which the rebels expelled from the capital, Sanaa. A Sunday statement from Yemeni Prime Minister Ma’een Abdulmalik said the gas station attack was the latest Houthi effort to undermine peace prospects.

“The Houthi militia’s terrorist attack on the gasoline station once again demonstrated that these criminal gangs are bloody warmongers desperately seeking to spoil any effort aiming to establish peace,” Abdulmalik said.

The United Nations and the United States are pushing for a political solution to end the nearly seven-year war and have repeatedly called on the Houthis to agree to a comprehensive truce. In March, the rebel group rejected a US-backed Saudi cease-fire proposal on the grounds that it didn’t go far enough to end the coalition’s use of blockade tactics.

“This inhumane violence must end,” Cathy Westley, charge d’affaires at the US Embassy to Yemen, said in a statement condemning the Marib attack. “The United States calls on the Houthis to agree to an immediate cease-fire and work towards bringing peace to Yemen.”

In February, the Houthis renewed their offensive on Marib, the Yemeni government’s last stronghold in the north. The United Nations has warned the Houthis’ advance could unleash another wave of displacement in a country already considered the site of the world’s worst humanitarian crisis.

Some 20 million Yemenis — roughly two-thirds of the population — require humanitarian aid to survive and the UN estimates 16 million people will experience hunger in the next year.