Members of Elvin Hunter Bgorn Williams’ mosque in the US city of Seattle alerted federal agents to his activities. 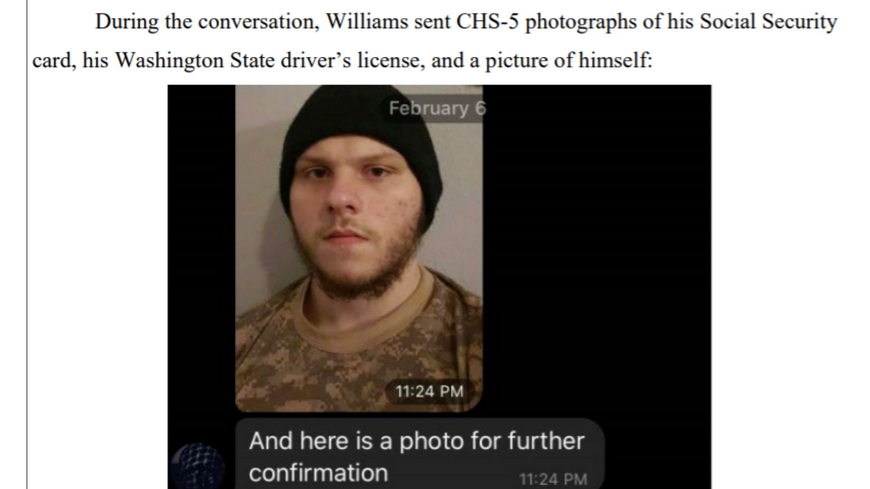 Elvin Hunter Bgorn Williams sent this photo of himself to a US informant posing as an Islamic State recruiter, according to the complaint against him. - US Attorney’s office in Seattle

An American man has been charged with attempting to join the Islamic State (IS) in Egypt.

Elvin Hunter Bgorn Williams of Seattle was arrested on Friday before a flight to Amsterdam at Seattle-Tacoma International Airport in Washington state. He planned to subsequently fly from the Dutch city to Cairo, according to a Tuesday press release from the Department of Justice.

The federal government’s investigation into Williams began in November 2020 when a member of a Seattle-area mosque told the FBI that they were concerned about Williams’ involvement in IS propaganda. The congregant said that worshippers of the mosque had been trying to de-radicalize him and help him financially, but then found out he was consuming IS propaganda and chatting with IS supporters on his cellphone.

Since then, Williams told people close to him that he wanted to join and fight for IS. In February, he began corresponding with two people who presented themselves as IS recruiters but were actually FBI informants. Williams requested to fight for IS in Egypt’s Sinai desert and was ultimately arrested at the airport, according to the criminal complaint.

FBI agents and sources regularly pose as members of designated terrorist organizations in an effort to charge people. A member of the anti-government Boogaloo movement pleaded guilty to attempting to help the Palestinian military organization Hamas in May following a similar FBI operation.

IS is active in Egypt’s Sinai Peninsula. In April, an IS-aligned group executed Coptic Christians and local tribal members.