Israel’s security agencies were blindsided when the killer of four civilians in Beersheba this week turned out to be an Israeli citizen from the nearby Bedouin town of Hura. 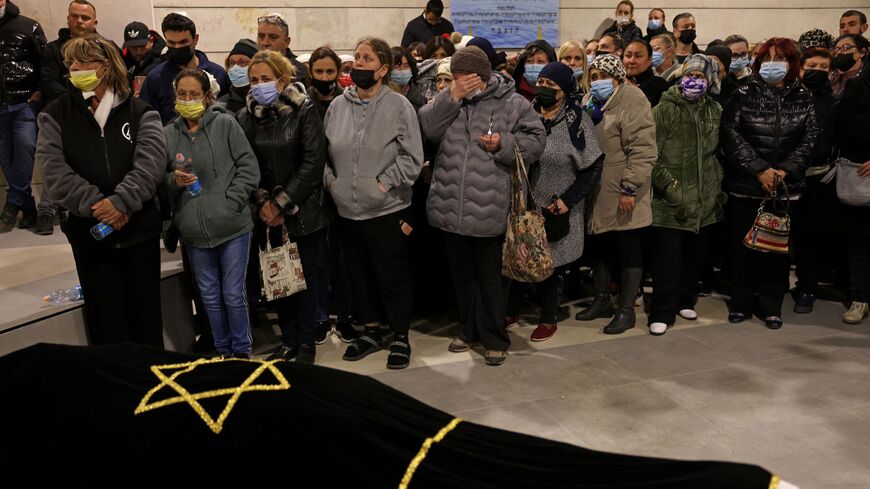 Mourners attend the funeral of Rabbi Moshe Kravitzky, who was killed the previous day in a knife attack by a convicted Islamic State group sympathiser, in the southern Israeli city of Beersheba on March 23, 2022. - MENAHEM KAHANA/AFP via Getty Images

Israel has been gearing up for a two-week-long perfect storm: the convergence of the holy Muslim month of Ramadan (beginning April 2), the Palestinian observance of Land Day March 31, a day of protests over land expropriation, and the Jewish holiday of Passover, which falls this year on April 15.

Israeli security forces and political leaders have drawn up appropriate responses for the upcoming dates. Defense Minister Benny Gantz prepared an extensive package of incentives and benefits for the Palestinian Authority that includes construction permits for Palestinian homes in the West Bank, money transfers and additional Israeli work permits for Palestinian laborers. The military has been instructed to suspend all demolitions of illegally built Palestinian and Arab housing, avoid provocative actions and try to limit friction with residents to the extent possible. Similar guidelines were drawn up with regard to extremist groups of Jewish settlers in the West Bank.

The blow came from an unexpected direction. In the afternoon of March 22, Mohammad Ghaleb Abu al-Qi’an set out from his home intent on murdering as many Jewish Israelis  as possible in the city of Beersheba. Armed with a car and a knife, he began his rampage by running over a bicycle rider, drove to a nearby gas station and stabbed a customer to death, proceeded to a nearby shopping center where he stabbed to death another man and woman and wounded two other people. He was shot to death by an armed bus driver, stopping the eight-minute killing spree. A bigger surprise awaited police and Shin Bet security agents: It turned out the killer was an Israeli citizen from the nearby Bedouin town of Hura — a former school teacher, no less. The second surprise was his affiliation: not Hamas nor Islamic Jihad, but the Islamic State organization.

The terror attack, one of Israel's worst in years, took security forces by complete surprise. The Shin Bet, police and army had been focused on preventing attacks from the Gaza Strip and Hamas' efforts to stir unrest in the West Bank and east Jerusalem ahead of Ramadan. No one thought of IS at all — Israel recently boasted of the clandestine role it played in defeating the Islamist organization. Former army chief Lt. Gen. (res.) Gadi Eizenkot told the Maariv newspaper in late January that the Israel Defense Forces had attacked IS targets throughout the Middle East, killing hundreds of its activists, wounding thousands and pulverizing much of the organization’s infrastructure. But it is now clear that while Israel helped bring down the radical organization throughout the region, it neglected to destroy its presence within Israel.

Abu al-Qi’an, 34, who was married with five children, was known to the authorities. He was arrested in 2015 while planning to leave Israel for Syria to join IS. He was tried and convicted of aiding a terrorist organization and sentenced to four years in jail. The relatively light sentence stemmed from the judge’s belief that al-Qia’an regretted his actions and would not repeat them. He was released in 2019. Security officials whose agencies are known for their efficiency, concede that they had no warning about his deadly plans. He had been on a list of potential IS recruitment targets, but was not particularly concerning.

The Negev region where most of Israel’s estimated 400,000 Bedouins live is a vast desert that borders both the Gaza Strip and Egypt’s Sinai Peninsula. The southern branch of IS is still active in Sinai, mounting occasional deadly attacks on Egyptian security forces. Israel reportedly helps Egypt fight the group by providing it with precise intelligence. As demonstrated by the Beersheba attack, information about IS' intentions within Israel was lacking.

Israel believes several dozen Israeli Arab citizens are IS supporters to some degree. The Beersheba assailant was one of four suspected IS supporters arrested in 2015 for promoting the organization’s ideology to students in Bedouin schools. The killing of four innocent civilians in Beersheba proves that while the organization has largely been defeated, its ideology has not, not even in Israel, home to one of the world’s most experienced and effective counter-terrorism mechanisms. Nonetheless, the number of IS supporters in Israel is proportionally small, and was considered to consist of several insignificant “sleeper” cells — until one of their members awakened.

The police and Shin Bet are expected to quickly expose the remaining Bedouin supporters of the southern branch of IS. The murders prompted anger and shock among many Israelis, including the Bedouin community. The head of the Islamist Ra’am party, which is a member of the Israeli government for the first time in the history of the state, Knesset member Mansour Abbas, harshly denounced the attack.

While Hamas and its sister Islamic Jihad organization were not involved this time, they have made no bones about their satisfaction with the killings. The troubling question now is its repercussions for the tense weeks ahead. Will they inspire copycat attacks by other would-be shahids?