Israel’s Bedouin community is outraged at a Shin Bet statement hinting at Bedouin involvement in terrorism. 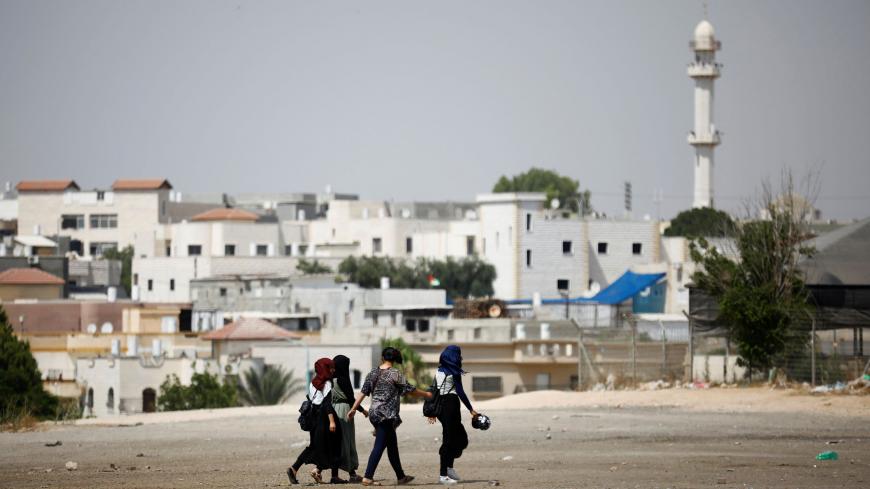 Girls walk on the outskirts of the Bedouin city of Rahat, southern Israel, July 17, 2017. - REUTERS/Amir Cohen

A July 21 statement by the Israel Security Agency (Shin Bet) about foiling a terror attack planned by a resident of the Negev Desert town of Rahat is angering leaders and activists of Israel's Bedouin society. According to the statement, Rahat resident Adel Abu Hadayeb has been indicted in Beersheba District Court for planning to bomb an Israeli hotel he knew from his work as a gardener nearby.

Along with details of the findings against him and the explosives and weapons in his possession — including his attempt to put together a rocket — the statement hinted at the involvement of Bedouins in terrorism: “The Shin Bet views with severity the involvement of Israeli civilians in terrorist activity, some of whom are influenced by Hamas propaganda disseminated on social networks and through Palestinian media." No further details were offered.

While the statement did not identify the suspected “Israeli civilians” involved in terrorism, Bedouin leaders and activists regard the statement as reflecting an ongoing attempt to smear and sideline the community, which has been an integral part of Israeli society since the state was established in 1948 and whose members have consistently served in army combat units and the police.

Sami Amarna, a resident of the Bedouin town of Segev Shalom south of Beersheba, tells Al-Monitor that the Shin Bet statement “is real incitement.” Amarna notes that even though no one knows Abu Hadayeb’s background and motives, “They are casting a negative light on an entire community.” Amarna added that all the Bedouins he knows in the south were surprised at the alleged plot and condemned it. However, he adds, “Just as we don’t say that all Jews are Eden Natan-Zadeh (an Israeli Jew who shot up a bus in the town of Shfar’am in 2005, killing four Arabs) or Baruch Goldstein (who massacred 29 Muslim worshipers in Hebron in 1994), how have we all suddenly become suspects and hostile elements?”

According to Amarna, warnings by Jewish politicians about the alleged radicalization of Bedouin society are seen for what they are — an attempt to score points with right-wing voters. “But when it comes from the Shin Bet, it is far more egregious. Instead of issuing unsubstantiated statements that generate Jewish hatred and fear of the Bedouins, we need to understand what made that young Bedouin susceptible to alleged Hamas messages,” Amarna says. He points to the deep unemployment among young Bedouins, the neglect in their communities, home demolitions and despair over what the future holds for them — all of which make many feel they do not belong. “I, for example, am married, and my kids are college graduates. I cannot think of carrying out an act that would cost me my life. But more and more young Bedouins today feel they have nothing to lose. Their future is as black as their present, lacking purpose and abounding in despair,” he says.

The Bedouins living in southern Israel “see how the state is making life difficult for them, preventing them from building or receiving basic services. Jewish communities erected next to us and illegal settlements [in the West Bank] are immediately hooked up to water and electricity. Here, in [the Bedouin village of] Bir Hadaj, they have no infrastructure, whereas any new Jewish community gets a new road, power and running war immediately. Does that seem normal to you? How can you expect not to have anger and frustration? So instead of behaving decently and treating us as equal citizens, [the Shin Bet] warn that we are dangerous.”

In 2015, the government approved a plan by then-Housing Minister Yoav Galant to establish five new communal settlements for Jews in the Negev. In July 2018, a government planning committee rejected plans for three of the five, including one named Neveh Gurion that was planned to go up on Bir Hadaj lands. But this did not diminish Bedouin anger at the authorities. “The Bedouins see how infrastructure [for Jews] is being laid down on their lands, and their hearts break,” Amarna explains. “Due to neglect and despair, a growing number of young Bedouins turn to drug dealing and weapons sales. That is all they have left. Instead of doing something for this generation, which is gradually sinking, they issue warning statements generating hate and incitement. This is infuriating and outrageous and will only make people hate us more.”

Unlike Israeli Jews, the law does not oblige Bedouins to serve in the army. Hundreds volunteer for service every year nonetheless. Mohammed Kabayeh, a Bedouin resident of northern Israel who encourages young members of his community to enlist in the Israel Defense Forces (IDF), accuses the Shin Bet of exaggerating “and doing the unforgivable. In 2015, a Bedouin from the Negev, Mahned Khalil Salem, carried out a terror attack at the central bus station in Beersheba. Then, too, they claimed that Bedouins were under the influence of Hamas and were growing more radical. Later, however, it turned out that his family were Palestinians from Gaza who had collaborated with Israel and been moved to Israel. But at the time, just like today, no one thought of the consequences and considered all Bedouins as planners or supporters of terrorism. What is being done to us is terrible.”

Kabayeh, who advises Israeli security agencies on how to mobilize Bedouin citizens for service in the IDF, says the past two years have seen an increase in the number of recruits from the north. In the south, he adds, the situation is static; no increase or drop in the number of Bedouin recruits have been recorded. “The major obstacle is the home demolitions that generate anger among young Bedouins and their families in the south at the state and its attitude toward them,” he says. Kabayeh adds, “Imagine how soldiers who proudly serve in a combat unit, whom I and my friends convinced to sign up for service, feel when the security agency warns the Jews against them? What do I tell them?”

Amarna agrees. “I teach my children and other young Bedouins I meet about coexistence, about living side by side and about love,” he says. His daughter is doing national service in lieu of army service, just like many Jewish girls her age, “and I encouraged her to do her service at a Jewish place. She volunteers at the Institute for Family Studies at the Soroka Hospital in Beersheba, and I think she should see the Jews and they should see her. Now I have to explain to her that because of the Shin Bet statement, Jews might regard her as a suspected hostile person. They [Shin Bet] should be ashamed by the ease with which they tarnish an entire community and cause it grave damage.”