With Prime Minister Benjamin Netanyahu pointing a finger at Israeli Arabs for wildfires, it's no wonder that the city of Beersheba removed announcements in Arabic from its public buses. 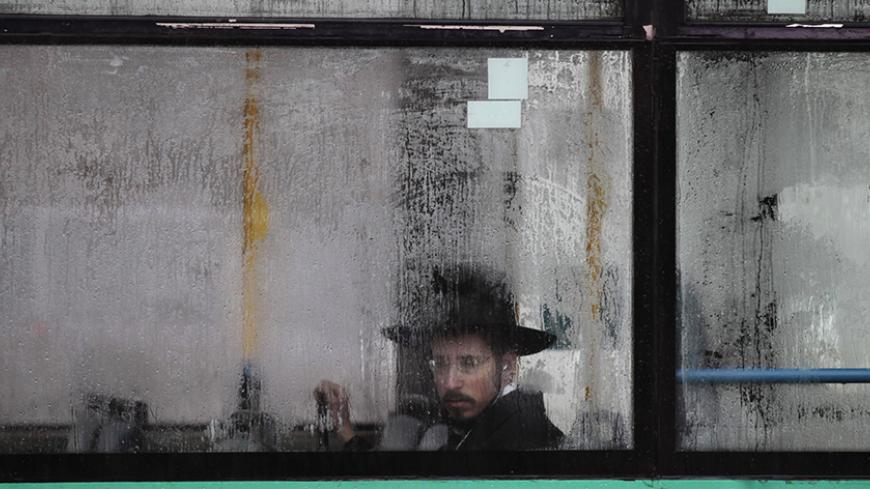 An ultra-Orthodox Jewish man looks out from a condensation-covered window of a bus in Jerusalem, Dec. 11, 2013. - REUTERS/Ammar Awad

In the week that headlines in Israel blared “arson terrorism,” and Prime Minister Benjamin Netanyahu blamed the Arabs, Beersheba Mayor Ruvik Danilovich asked the Ministry of Transportation to stop the Arabic-language announcements on the city’s buses. Danilovich, a young and energetic mayor, appears to have given in to pressure from passengers in the capital of the south, who protested against the announcement of bus stops in Arabic, in addition to Hebrew. In response, Transportation Minister Yisrael Katz of the Likud Party instructed the municipal bus company to immediately silence the public address system in Arabic.

Many of the passengers on Beersheba’s buses and trains are Bedouin residents of the city and its environs, and the public address system in Arabic is designed to serve them. “True, most of us speak Hebrew,” Haroun Abu Jama from the nearby Bedouin town of Lakiya told Al-Monitor. “But the minute we’re told that Arabic is not wanted here, we’re actually also being told that we’re also not wanted here."

In 1999, Adalah - the Legal Center for Arab Minority Rights in Israel petitioned the Supreme Court demanding that mixed cities such as Tel Aviv-Jaffa, Ramle and Lod be obliged to add Arabic writing to signposts in their jurisdiction. The Supreme Court accepted the petition and ruled that “Arabic is the language of Israel’s largest minority, which has lived in Israel from days of yore. This is a language linked to the cultural, historic and religious features of the Arab minority in Israel. This is the language of citizens who despite the Arab-Israeli conflict wish to live in Israel as loyal citizens with equal rights, with respect for their language and culture. The desire to assure a dignified coexistence for the descendants of our forefather, Abraham, with mutual tolerance and equality, justifies recognition of the Arabic language on municipal signposts in those cities where there is a significant Arab minority [6%-19% of the population].”

Arabs constitute one-third of the passengers on public transportation in Beersheba, according to activists from Bedouin towns and villages who spoke with Al-Monitor.

Attorney Nidal Othman of the Coalition against Racism in Israel told Al-Monitor that he shares the view that politicians’ reactions to the dozens of wildfires throughout Israel at the end of November, “and especially by the prime minister who tainted a whole community,” provided Beersheba’s mayor with a supportive public opinion to stop the announcements in Arabic. The wave of fires generated a public discourse that was entirely anti-Arab, he said, “influenced by the declarations of decision-makers like Netanyahu, Public Security Minister Gilad Erdan and Education Minister Naftali Bennett, who did not wait a single minute before accusing the Arabs of burning things that weren’t theirs."

According to Othman, his organization has received many complaints over the past week from Arab citizens claiming they were attacked by young Jewish men. “They [Jewish attackers] don’t go out to attack someone just like that,” he said. “We see this during times of war and security-related tensions. There’s someone who incites against the Arabs and this is the result. I view the decision to stop the Arabic-language announcements in Beersheba as comparable to violent attacks causing bodily harm.”

I reminded the attorney that some Arabs suspected of arson had been detained, and he replied, “That’s true. But they are few. No one gave much prominence to the mobilization of Arabs to host Jews whose homes had been damaged in the fires. Even the police admits that the insurance companies must compensate victims of the fires because there’s no proof they had been deliberately set [the state indemnifies victims of terrorist attacks only]. But it’s convenient to blame the Arabs, and this is the result.”

“We have totally despaired of our future in this place,” Abu Jama added. “We have young Bedouins signing up for military service to prove they are loyal citizens, but instead of respecting them, authorities are demolishing their homes and those of their families. Our schools are abysmal, the infrastructure [in Bedouin villages] is collapsing and now the language of our parents, grandparents and forefathers scares you? What’s left other than to cry?”

Not all the residents of Beersheba are pleased with their mayor’s appeal to the Ministry of Transportation. Veteran Beersheba public housing and social activist Yehuda Aloush, along with other activists, asked the academic staff at Ben-Gurion University to jointly protest the decision canceling Arabic-language announcements. Aloush put up his protest on a Facebook page titled Beersheba Together, writing, “Everyone was shocked and walking around with a sense of unease, embarrassment and anger at the spreading trend of hatred and racism around us. Racism and hatred are existential threats.”

The protest did not help. The Arabic-language public address system of the Beersheba transportation system has been silenced, and the damage is done. The Bedouins of southern Israel, who live in and around the city, working and studying in its institutions and using its public transportation, have heard the message loud and clear: The Arabic language is considered the language of the enemy and is therefore banned. It appears that in Israel of 2016, racism is what determines the rules of the game.