The attack in Egypt's northern Sinai region left as many as 10 soldiers dead. 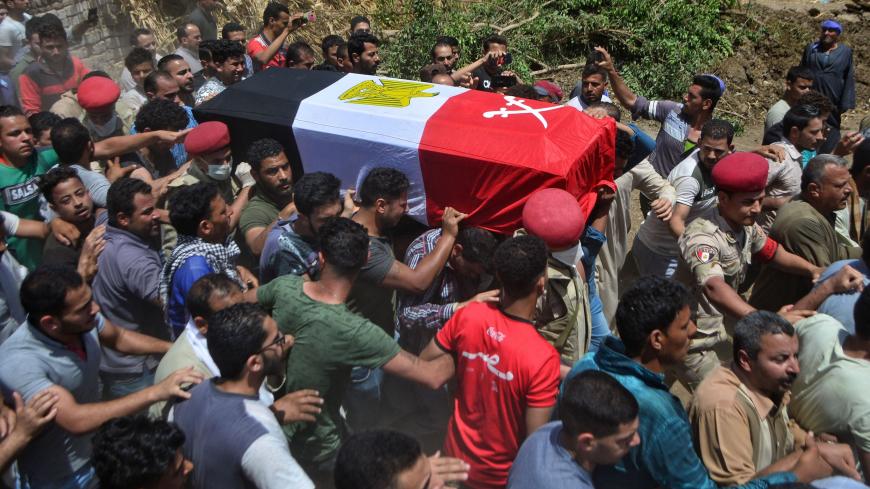 Mourners carry the coffin of Alaa Emad, an Egyptian soldier who was killed in an explosion targeting an armored vehicle near Bir al-Abed in North Sinai, during his funeral in the vilage of Abwan in the Minya province on May 1, 2020. - MOHAMED HAKIM/AFP via Getty Images

The Islamic State said today it was behind Thursday's attack that killed as many as 10 soldiers in Egypt’s northern Sinai region.

The insurgents made the claim of responsibility in their news outlet, but gave almost no detail on how the attack was carried out or who was involved, Reuters reported.

But according to a statement from Egyptian army spokesman Tamer al-Rifai, an improvised explosive device targeted a military vehicle near the southern city of Bir al-Abd.

Egypt’s Ministry of Interior condemned the attack in a brief statement today.

“Such abortive attempts will not stop the brave Armed Forces’ men from defending the resources of the nation,” a ministry statement read.

Egypt is trying to tamp down a yearslong insurgency ignited by the ouster of Muslim Brotherhood President Mohammed Morsi in 2013. The insurgents are led by an Islamic State affiliate in the northern Sinai Peninsula, which borders the Gaza Strip and Israel.

Last month, Egyptian security forces killed seven suspected militants in the capital, Cairo, who were believed to be plotting Easter attacks against the country’s Coptic Christians. A police officer died and three others were wounded following a shootout at the scene.

In April 2017, the Islamic State (IS) took credit for twin suicide bombings that killed dozens of people at Coptic churches celebrating Palm Sunday in northern Egypt.

In addition to targeting Christians and state security forces, the insurgents have also attacked Muslims. In November 2017, an IS-claimed bombing at a crowded mosque in northern Sinai left more than 300 dead. The worshippers were Sufi Muslims, whose mystical form of Islam the Sunni extremists find heretical.