Two members of the anti-US government Boogaloo movement have pleaded guilty to attempting to support the Palestinian military organization Hamas. 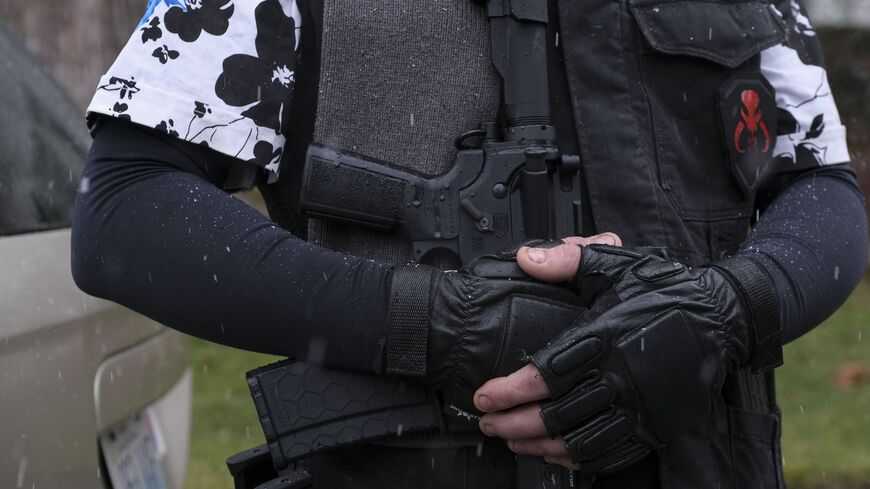 A member of the Boogaloo movement holds a rifle in front of the state capitol building in Frankfort, Kentucky, on Jan. 17, 2021. - JEFF DEAN/AFP via Getty Images

Two members of the anti-government Boogaloo movement in the United States have pleaded guilty to attempting to support the Palestinian organization Hamas.

Michael Solomon pleaded guilty Tuesday to one count of conspiracy to provide material support to a designated foreign terrorist organization, according to a Department of Justice press release. In December, his co-defendant Benjamin Ryan Teeter pleaded guilty to the same charge.

Hamas is a Palestinian military and political organization based in the Gaza Strip whose forces frequently clash with Israel. The Boogaloo movement is a loosely affiliated anti-government movement in the United States. Its members frequently show up at protests dressed in military apparel and brandishing assault weapons. It is often described as “far-right” by US media, but some elements of the movement have expressed support for anti-police protests in the country.

Solomon and Teeter were members of the Boogaloo subgroup “Boojahideen,” which is a play on the concept of Muslim fighters known as mujahedeen. They did not actually communicate with any Hamas members. Rather, they spoke to an undercover member of the FBI and a confidential government source posing as Hamas operatives. The confidential source was paid by the FBI and is a “Middle Eastern male with a heavy accent,” according to the original criminal complaint.

Solomon and Teeter expressed a desire to work with Hamas due to shared anti-US government beliefs and sought the organization’s help in blowing up a courthouse in the US state of Minnesota. They also said they wanted to build gun suppressors that reduce firearm noise for Hamas, among other things, according to the complaint.

Working with Hamas is a crime in the United States because the group is a designated foreign terrorist organization by the US government.

A lawyer for Teeter did not immediately reply to a request for comment.

Hamas denied any connection with the Boogaloo movement last September when the two were charged, according to Arabic-language media reports.

The law enforcement tactic of posing as members of a terrorist organization has been criticized by some observers.

Solomon and Teeter have yet to be sentenced.