Alexanda Kotey, a member of the brutal Islamic State cell linked to the kidnapping and killing of Westerners, is expected to plead guilty to one or more of the charges against him. 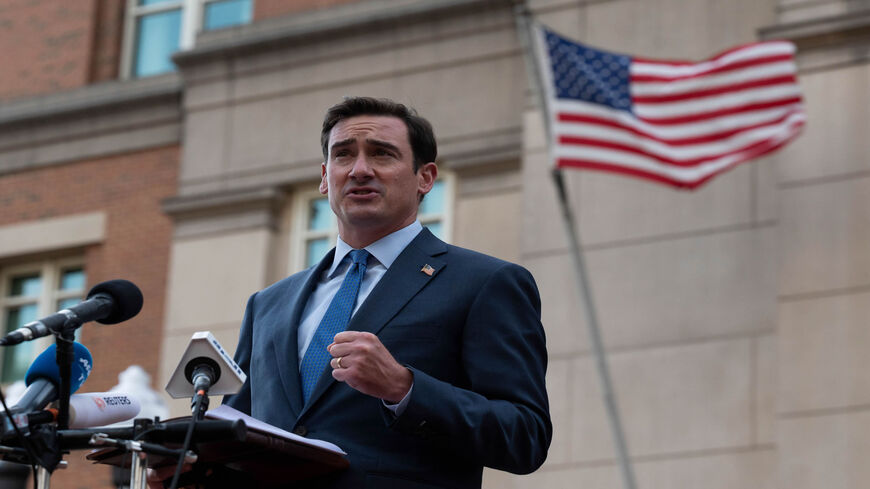 US Attorney G. Zachary Terwilliger speaks to the press after a hearing for former British Islamic State fighters Alexanda Kotey and El Shafee Elsheikh, dubbed the "Beatles," at the US District Court in Alexandria, Virginia, Oct. 9, 2020. - Andrew Caballero-Reynold/AFP via Getty Images

A former Islamic State (IS) member linked to the kidnapping and execution of several Americans is expected to change his plea to “guilty” in a federal courtroom on Thursday.

Court records show a “change of plea hearing” for Alexanda Kotey is scheduled at the Eastern District of Virginia federal courthouse in Alexandria on Thursday evening. Kotey, who was stripped of his British citizenship, has previously pleaded not guilty to hostage-taking and terrorism-related charges filed by the Justice Department last year.

Kotey and his co-defendant El Shafee Elsheikh were captured in eastern Syria by the US-allied Syrian Democratic Forces in 2018. They were extradited to the United States from a detention center in Iraq last October.

Nicknamed “the Beatles” for their accents, Kotey and Elsheikh made up half of the notorious IS cell that the US government has tied to the murder of more than two dozen hostages, including American journalists James Foley and Steven Sotloff and American aid workers Peter Kassig and Kayla Mueller.

The other two “Beatles” members were Mohammed Emwazi, who died in a CIA drone strike in 2015, and Aine Davis, who was sentenced to prison on terrorism charges in Turkey in 2017.

US prosecutors describe Kotey and Elsheikh as “leading participants in a brutal hostage-taking scheme” against Americans and Europeans.

Both have admitted to joining IS, but in interviews with media outlets have downplayed their roles in the terrorist group. Kotey and Elsheikh denied taking part in executions, and said their duties consisted mostly of extracting information from the detainees to be used in ransom negotiations.

The federal indictment alleges that Kotey and Elsheikh worked closely with Abu Muhammed al-Adnani, a top IS figure who reported directly to Abu Bakr al-Baghdadi before the former IS leader was killed in a 2019 US raid in Syria. According to prosecutors, the defendants participated in the abduction of Westerners in Syria and allegedly took part in a “prolonged pattern of physical and psychological violence of the hostages.”

Under an evidence-sharing agreement with the United Kingdom, which had collected hundreds of witness statements and intelligence intercepts on Kotey and Elsheikh, former US Attorney General William Barr said the United States would not seek the death penalty in either case.