British-born Alexanda Kotey was part of an Islamic State cell that the US government has linked to the hostage-taking and deaths of Americans James Foley, Steven Sotloff, Peter Kassig and Kayla Mueller. 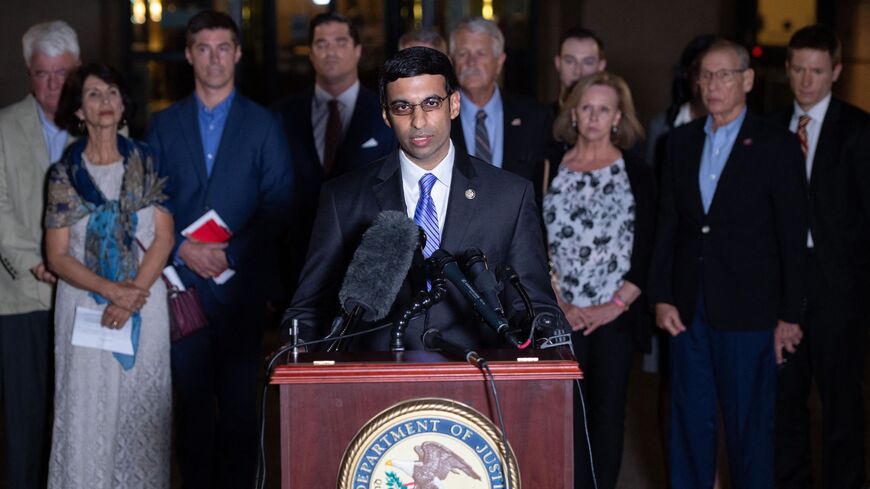 Acting US Attorney Raj Parekh (C), of the Eastern District of Virginia, speaks following the guilty pleas by Alexanda Kotey, a member of the notorious Islamic State kidnapping cell dubbed the "Beatles," to charges of conspiring to murder four American hostages, alongside the victims' families, outside the the US District Court in Alexandria, Virginia, Sept. 2, 2021. - SAUL LOEB/AFP via Getty Images

A member of the brutal Islamic State cell dubbed in the media as “The Beatles” has pleaded guilty to all charges against him relating to the hostage-taking of four slain Americans, the US Justice Department said Thursday.

In a Virginia courtroom on Thursday, Kotey pleaded guilty to all of charges listed in the eight-count indictment, including hostage-taking resulting in death, conspiracy to commit murder of Americans abroad and conspiracy to provide material support or resources to terrorists.

“This guilty plea ensures that Kotey will spend the rest of his life in prison for the horrific crimes he has committed,” Mark J. Lesko, acting assistant attorney general for the Justice Department’s National Security Division, said in a statement.

“Although there remains much work to be done in this case, we hope today’s events provide some measure of justice for Kotey’s victims and their families as they continue to grieve the loss of their loved ones,” Lesko said.

Kotey and his co-defendant El Shafee Elsheikh were captured in eastern Syria by the US-allied Syrian Democratic Forces in 2018. They were extradited to the United States from a detention center in Iraq last October. Elsheikh has pleaded not guilty.

Kotey and Elsheikh made up half of the notorious IS cell nicknamed “The Beatles” due to their accents. A third member of the group, Mohamed Emwazi — also known as “Jihadi John” — died in a CIA drone strike in 2015. The fourth, Aine Davis, was sentenced to prison on a terror conviction in Turkey in 2017.

Kotey faces a mandatory sentence of life in prison and is scheduled to be sentenced on March 4, 2022. Under the plea agreement, he can request a transfer to the United Kingdom after 15 years. If the UK government agrees to take him, Kotey would serve out the remainder of his US-imposed sentence in a British prison.

Diane Foley, whose son James was beheaded in a propaganda video released by the terrorist group in August 2014, thanked those involved in Kotey’s apprehension and prosecution.

“This accountability is essential for anyone who kidnaps or unjustly detains Americans abroad, if our country wishes to ever deter hostage taking,” Foley said in a statement.

Foley, who is the president and founder of the James W. Foley Legacy Foundation, called on the Biden administration to bring home other missing Americans. According to the Foley Foundation, there are 55 publicly known cases of US nationals held hostage abroad.