The charges against El Shafee Elsheikh and Alexanda Kotey include hostage-taking resulting in death and conspiracy to provide material support to terrorists. 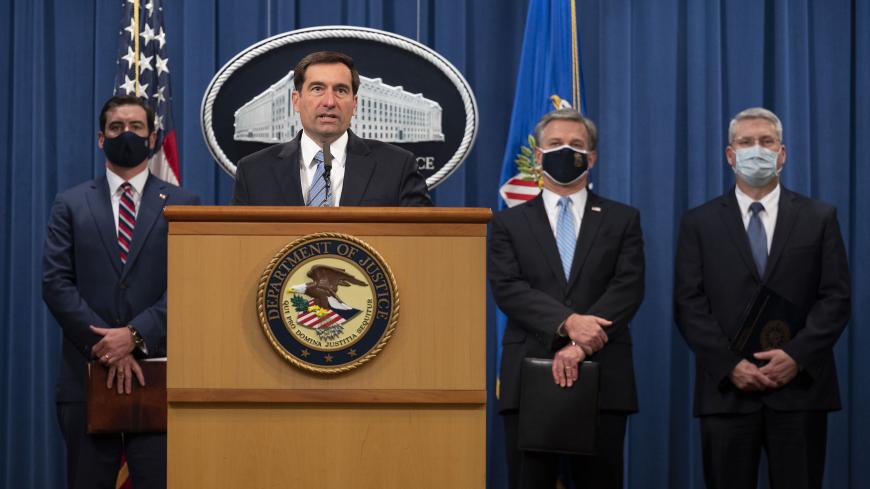 Two Islamic State members linked to the kidnapping of four slain Americans will stand trial in the United States for hostage-taking and terrorism-related charges, the Justice Department announced Wednesday, in what the families of victims said was “the first step in the pursuit of justice.”

British nationals El Shafee Elsheikh and Alexanda Kotey, whom their captives nicknamed the "Beatles" for their accents, make up half of the notorious Islamic State cell that the US government has tied to the murder of more than two dozen hostages, including American journalists James Foley and Steven Sotloff and American aid workers Peter Kassig and Kayla Mueller.

“They have underestimated American resolve to obtain justice for our fellow citizens,” said Assistant Attorney General for National Security John Demers in a news conference unveiling the charges Wednesday. "These men will now be brought before a United States court to face justice for the depraved acts alleged against them in the indictment."

The indictment comes more than two years after Elsheikh and Kotey were captured by US-allied Kurdish fighters in Syria. Since last October, the US military has held them without charge at an airbase in Iraq.

The families of the four Americans kidnapped and killed by the Islamic State welcomed the news in a statement Wednesday.

“We are hopeful that the US government will finally be able to send the important message that if you harm Americans, you will never escape justice. And when you are caught, you will face the full power of American law,” they said.

During interviews with foreign journalists, the two men have downplayed their role in IS. Elsheikh and Kotey deny taking part in the executions and said their duties consisted mostly of extracting information from the detainees to be used in ransom negotiations.

According to the indictment, Kotey and Elsheikh worked closely with Abu Muhammed al-Adnani, a former IS commander and chief media spokesperson who reported directly to former IS chief Abu Bakr al-Baghdadi. Prosecutors allege that in their role supervising detention facilities the pair engaged "in a prolonged pattern of physical and psychological violence against hostages."

It wasn’t clear until recently whether Elsheikh and Kotey would ever face trial in the United States. Attorney General Bill Barr had threatened to hand them over for prosecution in Iraq, where human rights groups say trials of IS fighters lack due process, if the United Kingdom did not promptly share key evidence.

British authorities have hundreds of witness statements and intelligence intercepts collected on the Beatles. A court ruling prevented them from transferring that evidence to the United States, a country where capital punishment is a possible outcome.

The parents of the American hostages urged the White House privately and publicly to rule out their execution so that US prosecutors could build the strongest case possible using the British-supplied evidence.

Barr relented in August, telling the UK government that he would take the death penalty off the table. That assurance cleared the way for a UK judge to reverse the ruling on evidence-sharing.

The Justice Department said Elsheikh and Kotey will make their first appearance in the US Court for the Eastern District of Virginia later on Wednesday.

The families were also unanimous in asking that the pair stand trial in a federal courtroom rather than be sent to the US military prison in Guantanamo Bay, Cuba, which they feared could be used as a further recruitment tool for groups like IS.

Marsha Mueller, whose daughter Kayla was held captive and killed by the group, told Al-Monitor in August she preferred the men receive a life sentence in a supermax prison.

“My hope is that they are tried and put away in life in prison and solitary confinement, and they are pretty much forgotten about,” she said.