The United States will move forward with plans to prosecute El Shafee Elsheikh and Alexanda Kotey if the United Kingdom, their home country, shares key evidence. 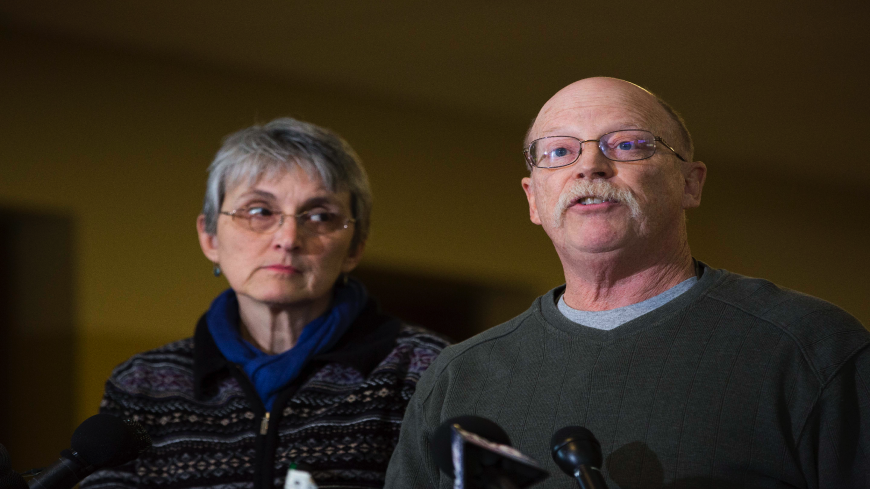 Ed Kassig (R) and Paula Kassig (L) speak to the media about the execution of their son Peter Kassig by IS forces on Nov. 17, 2014, at Epworth United Methodist Church in Indianapolis, Indiana. Kassig was a US aid worker and former Army Ranger and was executed after being held hostage for over a year by IS. - Photo by Aaron P. Bernstein/Getty Images

The United States will not seek the death penalty in the prosecution of two Islamic State (IS) members suspected in the killing of American hostages, US Attorney General William Barr said, as long as the United Kingdom hands over evidence key to putting them behind bars.

“Time is of the essence,” Barr wrote in a letter to UK Home Secretary Priti Patel obtained by Al-Monitor. “We would hope and expect that, in light of this assurance, the evidence can and will now be provided promptly.”

Barr’s announcement, which was first reported on by Defense One, paves the way for the two governments to resume intelligence cooperation on the case. The United Kingdom, where suspects El Shafee Elsheikh and Alexanda Kotey are from, has hundreds of witness statements and intelligence intercepts collected on the two men, who make up half of the notorious IS cell dubbed the “Beatles."

The UK government initially handed over some evidence without assurances on the death penalty, but Elsheikh’s mother filed a lawsuit to stop further evidence-sharing with a country where capital punishment is a possible outcome. The British Supreme Court ruled in March that the former home secretary’s decision to share information had breached the country’s data protection law.

“If the United Kingdom grants our mutual legal assistance request, the United States will not seek the death penalty,” Barr wrote. "I know that the United Kingdom shares our determination that there should be a full investigation and a criminal prosecution of Kotey and Elsheikh."

As previously reported by Al-Monitor, Barr told the victims' families that Washington would hand off Kotey and Elsheikh to Iraq for prosecution, where they are currently detained, if London did not promptly transfer evidence. In his letter to Patel, Barr confirmed the United States would move forward with those plans by Oct. 15.

The parents of slain American journalists James Foley and Steven Sotloff and slain American aid workers Peter Kassig and Kayla Mueller have pressed the White House privately and publicly to drop its stance on the death penalty so that prosecutors could build the strongest case possible using British-supplied evidence.

“If we don't lead by taking these men on who tortured and were part of the murder of four Americans, how can we ever deter anyone who ever wants to do anything like that to our citizens?” Diane Foley told Al-Monitor earlier this month.

As news of Barr’s letter broke Wednesday, the Foleys marked six years since their son James, a freelance war correspondent, was the first hostage publicly beheaded by the terrorist group in Syria. They and the other families have asked that Kotey and Elsheikh be given life sentences.

“I hate the thought of the burden this puts on our country, although I do think we’re the best country to do it,” said Marsha Mueller, whose daughter Kayla was held captive and killed by the group.

“My hope is that they are tried and put away in life in prison and solitary confinement, and they are pretty much forgotten about,” she said.