Following a phone call with Attorney General William Barr, the parents of Americans killed by the Islamic State (IS) are hopeful two IS detainees will face justice. 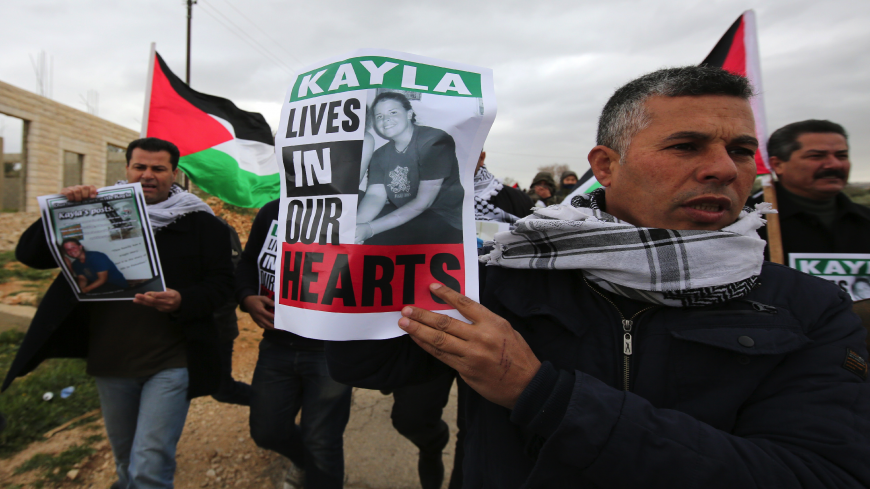 Palestinians protest terrorism on Feb. 13, 2015. The poster shows a picture of US aid worker Kayla Mueller, who was murdered while being held hostage by the Islamic State. - ABBAS MOMANI/AFP via Getty Images

Six years ago this month, the Islamic State (IS) published its first video in what would become the prevailing image of the war: a jumpsuit-clad hostage kneeling before a knife-wielding executioner. For the parents of slain Americans James Foley, Steven Sotloff, Peter Kassig and Kayla Mueller, justice has remained elusive.

But two of the families told Al-Monitor they were given fresh hope after a phone call with Attorney General William Barr on Aug. 6. Barr told them federal prosecutors will take the death penalty off the table as a potential sentence for two men alleged to have tortured and killed foreign hostages. News of the call was first reported by NBC News.

This decision would make it possible for the United Kingdom, the suspects’ home country, to share evidence that could be key to putting El Shafee Elsheikh and Alexanda Kotey behind bars in the United States. If the British government doesn't provide its evidence within six weeks, Barr told the families that Kotey and Elsheikh may be prosecuted in Iraq where they are currently detained.

"At this point, the ball’s in their court," said Carl Mueller, whose daughter Kayla was imprisoned by the group and raped by then-IS leader Abu Bakr al-Baghdadi. "If [the British government] doesn't want to do anything for their citizens that were murdered, well, so be it. Let us do it."

"I think [Barr’s] actually given them an ultimatum. The death penalty is off the table for this period of time. If you don’t make a decision, they might leave them in Iraq."

The attorney general said he would be speaking with UK Home Secretary Priti Patel ahead of a public announcement this week, according to Diane Foley, mother of one of the victims. US Justice Department Spokesperson Alison Kjergaard declined to confirm whether the administration’s position on the death penalty had moved, but she told Al-Monitor that “the department is committed to ensuring justice for the victims.”

Two years after their capture by US-allied Kurdish forces in Syria, Elsheikh and Kotey have yet to step foot in a courtroom, despite admitting to at least some of their crimes during multiple interviews with foreign journalists.

The delay is not for lack of evidence. The British government has more than 600 witness statements collected by the Metropolitan Police, in addition to phone calls and other intelligence intercepts on the two men.

“It’s clear that the US does not have that evidence and the UK does,” said Toby Cadman, a British human rights lawyer advising Diane Foley. “I think it is a credible concern.”

The UK government initially handed over some materials to American prosecutors without assurances on the death penalty, which Britain abolished in 1998. The British Supreme Court ruled in March that the home secretary’s decision to share information in a trial where capital punishment is a possible outcome had breached the country’s data protection law.

The parents of the four American victims have called on the Donald Trump administration both privately and publicly to spare Kotey and Elsheikh from the death penalty so that prosecutors can build the strongest case possible using British-supplied evidence.

“They’ve listened to us, taken meetings with us. And we’ve tried to be patient,” said Diane Foley. “This August will be six years since Jim was killed. It’s really time to take action.”

Foley's son, a freelance journalist who covered the Syrian civil war for outlets including GlobalPost and Agence France-Presse, was the first hostage publicly beheaded by the group after the US government failed to secure his release.

“This administration speaks of law and order,” Foley said. “To me, our American justice system is a perfect way to give a strong message to any terrorist seeking to kidnap or hurt our citizens.”

Dubbed “the Beatles” by their victims due to their accents, Kotey and Elsheikh are the remaining half of a British cell that also included Mohammed Emwazi, who died in a CIA drone strike in 2015, and Aine Davis, who was sentenced to prison on terrorism charges in Turkey in 2017.

The US State Department says the group was responsible for beheading some two dozen hostages and subjecting their victims to exceptionally cruel torture methods, including waterboarding, electric shock and mock executions.

Former hostages have said some of the worst treatment came from masked, British-accented jailers matching their description, but Kotey and Elsheikh have downplayed their role. In interviews, they claimed their duties largely consisted of collecting email addresses and other information from the hostages, which would later be used in ransom negotiations.

Kotey and Elsheikh, whose British citizenship has been revoked, remain in US military custody.  The pair are currently held without charge at Ain al-Asad air base in Iraq.

“It kind of gives them a celebrity status and lets them become martyrs for IS,” said Marsha Mueller, Kayla’s mother. “Just bring them here, put them on trial, put them away and let them be forgotten.”

The Muellers believe a trial by jury can shed some light on what happened to Kayla. Unlike Foley, Sotloff and Kassig, whose killings were documented on video, the circumstances surrounding their daughter's death are unclear.

“The US let all of our families down,” Marsha Mueller said, referring to the previous administration's no-concessions policy and its widely criticized handling of the hostages. The Donald Trump administration, she says, “knows how we feel, and they are listening to us.”

“We would all prefer a life sentence in a supermax prison,” Carl Mueller said of Kotey and Elsheikh, whose trials he said he would attend.