Building the mosque in the center of Turkey’s largest city has symbolic value regarding the struggle between secularism and Islamic conservatism in the country. 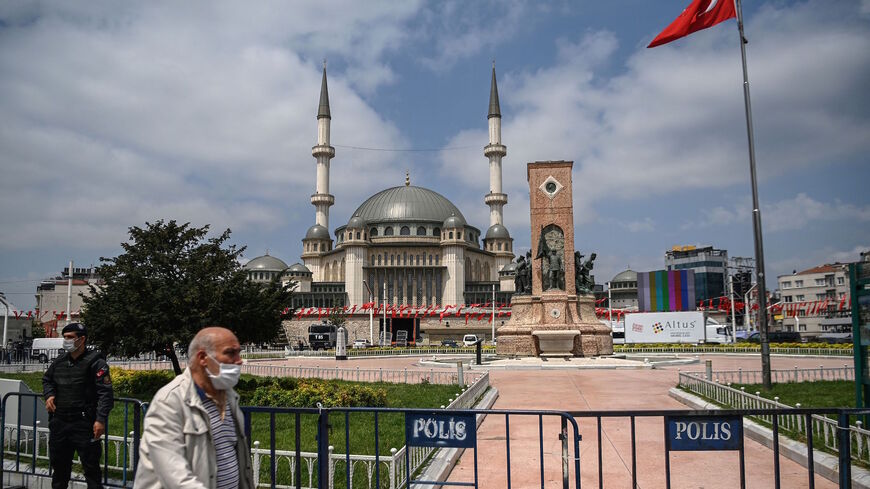 A man passes by while a Turkish police officer stands guard during the inauguration of a new mosque in Istanbul's iconic Taksim square on May 28, 2021. - OZAN KOSE/AFP via Getty Images

“Our mosque has already taken its distinguished place among the symbols of Istanbul,” he said, as reported by the official Anadolu Agency.

Reports varied on the mosque's indoor capacity, which is at least 2,250 people. The mosque complex can host up to 4,000 worshippers at a time.

It has a three-story parking garage which can fit 165 vehicles. It has two minarets, or prayer towers, that are 61 meters (200 feet) in height, according to Anadolu.

Building a center for Muslim worship in Taksim Square has tremendous symbolic value. There is a monument to the founder of modern Turkey — Kemal Mustafa Ataturk — in the square. Ataturk was staunchly secular, but Erdogan, a Muslim conservative, has elevated the role of Islam in public life while in power.

The pro-opposition news outlet Ahval described Taksim as the “traditional secular and liberal heartland of Turkey’s largest city.” The pro-government Daily Sabah reported that past attempts to build a mosque there “faced fierce opposition from the secular elite that argued it was an act of ‘Islamization,' despite high demand from practicing Muslims.”

Such a move is in character for Erdogan. Last year, he ordered the iconic Hagia Sophia to be converted from a museum to a mosque. The 1,500-year-old Byzantine structure was originally a Christian church before becoming a mosque in Ottoman times. Ataturk then turned it into a museum in 1934.

Erdogan first called for building a mosque in Taksim in 1994 when he was campaigning for mayor of Istanbul.

The mosque's inauguration also coincided with the anniversary of the 2013 Gezi Park protests that erupted in Taksim Square. One grievance of the protesters was the perceived anti-secular policies of Erdogan’s Justice and Development Party.