A senior Islamic State operative has been arrested in Istanbul following a tip from US intelligence services. 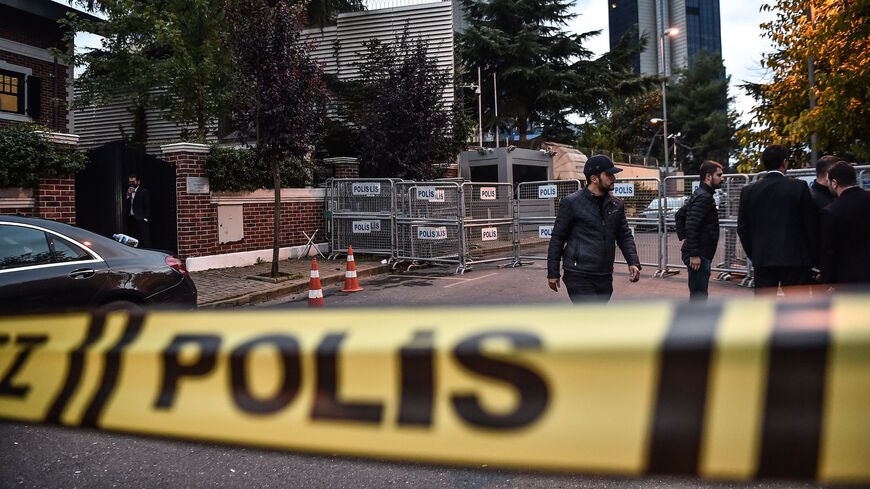 Saudi Arabia's consulate is cordoned off by Turkish police in Istanbul on Oct. 15, 2018. - OZAN KOSE/AFP via Getty Images

Acting on a tip from the US government, Turkish authorities have arrested a senior Islamic State operative in Istanbul, the latest in a string of arrests of jihadis in Turkey, state-run Turkish radio and television reported today.

Mustafa Abdulwahab Mahmud, a 32-year-old Egyptian who was a top explosives expert for IS, was detained with three other suspects in Istanbul after fleeing Syria, TRT said, following a tip from US intelligence services. In early May, Turkey arrested an Afghan national code-named Basim described as the “right-hand man” of IS leader Abu Bakr al-Baghdadi, who killed himself to avoid capture by US forces in October 2019 after he was tracked down in a hideout close to the Turkish border.

The United States has been turning the screws on IS operatives who continue to move money through Turkey. On May 17, the Treasury Department announced sanctions against three people and one company said to have played key roles in IS’ financial network. One of the sanctioned individuals, Alaa Khanfurah, is accused of using a Turkish-based money services company to funnel funds to his colleagues inside Syria, where IS resurgence is a mounting worry.

The sanctions also target another money services company, also based in Turkey, that is run by brothers Idris and Ibrahim al-Fay.

The Treasury reckons that IS holds up to $100 million in cash reserves. In a January report it observed that IS continued “to use money services businesses, including hawalas, to move funds in and out of Iraq and Syria, often relying on logistical hubs in Turkey and in other financial centers.”

During the so-called caliphate’s heyday between 2014 and 2017, Turkey was the main conduit for thousands of foreign militants making their way to Syria, leading to the moniker “jihadi highway.”

The acknowledgement by Turkish state-run media outlets that US officials provided the intelligence leading to the most recent high profile arrest comes days after unnamed Turkish officials told the London-based news site Middle East Eye that Turkish Interior Minister Suleyman Soylu had suspended joint training and other programs between Turkish and US police forces and "denied US access to Turkish police intelligence on suspects and refused to share information regarding Turkish investigations with American counterparts."

Turkish officials did not formally rebut the claims, but a senior official speaking not for attribution to Al-Monitor called the claims that security cooperation had been downgraded “highly exaggerated and nothing new.” The State Department did not respond to Al-Monitor’s request for comment.

Soylu’s leak was likely intended to bolster his nationalist credentials and divert attention from the avalanche of accusations being leveled against him by exiled organized crime boss Sedat Peker, who claims to have had close ties to him.

Soylu prides himself on refusing a meeting with US Ambassador David Satterfield and has repeatedly claimed that the United States was behind the failed attempt in July 2016 to violently overthrow Turkish President Recep Tayyip Erdogan.

Relations between the NATO allies have steadily deteriorated since the botched coup and took a sharp turn for the worse when Turkey acquired Russian-made S-400 missiles and was slapped with sanctions that effectively bar further sales of US weapons to Turkey. A thaw is unlikely until Turkey rids itself of the Russian system, something it says it will not do.