Ankara is working to supply electricity to Idlib province, which is controlled by Hayat Tahrir al-Sham, in its latest effort to establish an economic foothold there. 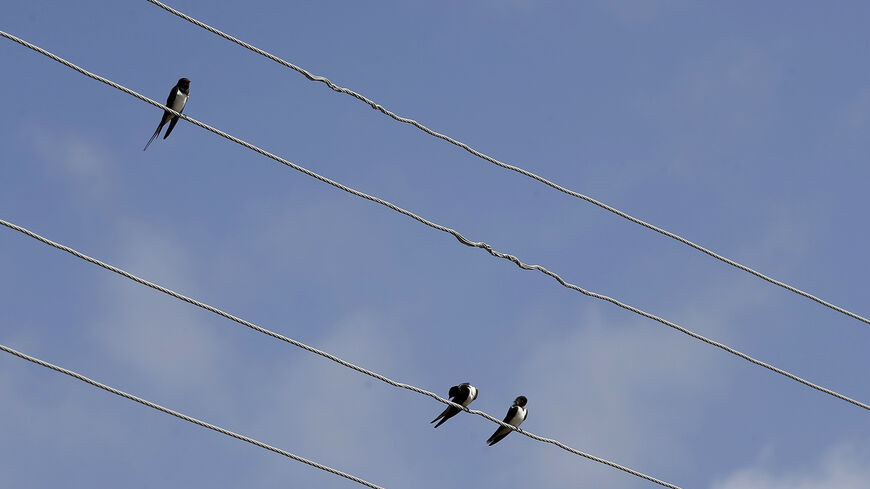 Swallows are seen perched on electric cable on the shores of Wadi Qandil, north of the seaside city of Latakia near the town of Kassab, on July 7, 2017. - JOSEPH EID/AFP via Getty Images

Regions under the control of control of Hayat Tahrir al-Sham (HTS), a militant group that controls northwest Syria, are set to import electricity from Turkey, in a sign that Ankara is taking steps to formalize and cement its relations with the HTS government.

Towns and villages in Syria’s northwestern province of Idlib, which is under the control of HTS, are suffering constant power outages. The power stations serving the area are located in areas controlled by the Syrian government, which has been refusing to supply the province with electricity ever since it fell to the armed opposition in March 2015.

The residents of Idlib have been relying on electricity from private generators. The service is expensive at 50 to 70 Turkish liras ($6 to $8) per month. There is some use of solar panels, but most families cannot afford them.

An official at the General Electricity Company told Al-Monitor on condition of anonymity, “Because of our inability to solve the electricity problem with the Syrian regime, we agreed with a local energy company to supply Idlib province with electricity from Turkey. Through this project, the city will obtain electricity 24 hours a day, which will provide opportunities to establish industrial projects in the area. The company will receive 200 megawatts from Turkey, at an expected price of 70 Turkish piasters for the kilowatt. According to the agreement, the project will first cover cities and towns located on the Turkish border, and later extend to other regions. The cost of the project is estimated at about $1 million. The electricity service will be measured through electric meters and will be prepaid via an electronic card credited with a sum for each family according to its needs.”

The official added, “Electricity was supposed to reach the area in mid-2020, but several obstacles delayed the project. Most of the electricity networks have been looted and damaged due to the repeated bombing of electrical transformers. Repair costs are very high. … Another reason is that the border area adjacent to Turkey through which the electricity lines will be extended is mountainous. It requires many poles and connections, especially for the medium voltage that requires large poles. Transformers will be needed to convert the electricity to a lower current. This requires many transformers at a high cost."

"We fear electrical transformers will be targeted again,” he added.

The move to import electricity from Turkey is the first project of its kind between the Syrian Salvation Government and Turkey. Ankara wants a foothold in Idlib province like it has in the cities and towns of the northern countryside of Aleppo, which are under the control of the Turkish-backed opposition Syrian National Army.

The steps to provide services in Idlib coincide with Turkish efforts to consolidate the cease-fire agreement signed in Moscow on March 5, 2020, and to open the M4 international highway. Turkey, with numerous military bases in the de-escalation zone of Idlib, is working to maintain stability and security in the area and fulfill its obligations under the agreement with Russia.

Abdulaziz Khalifa, a journalist working for Baladi, told Al-Monitor, “The project to bring electricity to the Syrian Salvation Government seems profitable, as it will allow it to control electricity prices.”

He explained, “This government imposed a monopoly over several economic sectors, such as the telecommunications sector through one of its affiliated companies providing and distributing broadband data to all internet service providers. The government forced about 150 local internet providers to exclusively deal with it at its own prices. The Salvation Government also monopolizes trade in fertilizer, crops, pesticides, cement and building materials through private companies affiliated with it and run by figures close to HTS. Watad Petroleum is one of these companies monopolizing the fuel and domestic gas smuggled from Turkey.”

Khalifa argued, “These projects are part of the soft power used by Turkey to impose economic domination in Idlib after achieving military control, even if it has to work with HTS, which Ankara sees as the de facto authority in the area.”