Prominent Democratic National Committee members urged President Joe Biden to relieve sanctions on Iran as the window closes for a return to the nuclear deal. 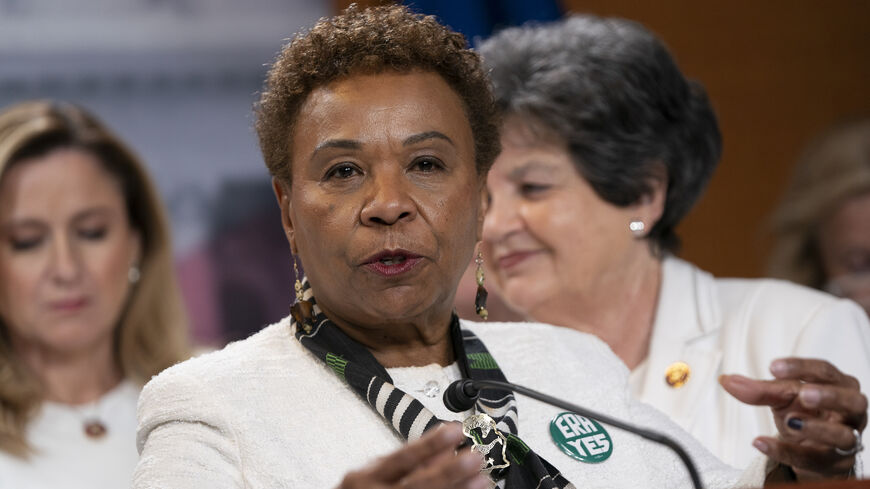 US Congresswoman Barbara Lee (D-CA) speaks during a news conference with members of the Democratic Women's Caucus prior to State of the Union address at the US Capitol on Feb. 4, 2020, in Washington, DC. - Alex Edelman/Getty Images

More than 50 members of the Democratic National Committee urged President Joe Biden’s administration in a letter on Monday not to hesitate to lift sanctions on Iran in exchange for Tehran’s return to compliance with the 2015 nuclear agreement.

The letter, signed by Congresswoman Barbara Lee, Minnesota Attorney General, former Congressman Keith Ellison and 51 other prominent Democratic party members, called on the administration not to acquiesce to Republican lawmakers’ opposition to a return to the deal, known as the Joint Comprehensive Plan of Action.

“We commend you for pledging to return to the JCPOA and for beginning a multilateral diplomatic process with other world powers to return all sides to compliance with the accord through the compliance-for-compliance formula,” the letter read. “The issue of who goes first should not become an obstacle.”

It went on, “Moreover, lifting Trump’s bad-faith sanctions — which he explicitly imposed on Iran in order to make a return to the JCPOA next-to-impossible — should not be treated as a concession to Iran, but rather as an effort to restore US credibility and enhance American security.”

The letter follows the fourth round of indirect talks between the Biden administration and Iran’s government in Geneva, mediated by European Union signatories of the original agreement.

Germany’s Foreign Minister Heiko Mass warned on Monday that “time is running out” on the talks ahead of Iran’s national elections in June, but said “all participants are conducting the talks in a constructive atmosphere.”

In 2018 the administration of former US President Donald Trump unilaterally walked out of the deal, which was originally negotiated by the Barack Obama administration. The Trump administration introduced a so-called “maximum pressure” campaign of economic sanctions against Iran.

Iran’s government reacted by publicly and incrementally violating the deal, advancing its nuclear enrichment capabilities in a bid to pressure the United States to return to compliance. Iran-linked militias in the Middle East also increased missile and rocket attacks on US forces and their allies in the region.

The Trump administration’s pressure campaign failed to force Iran’s Islamic Revolutionary Guard Corps to withdraw its military advisers from Syria and to stop rocket and missile attacks by Iran-backed groups in Iraq and Yemen. It also appears to have hardened Iranian leaders’ resolve to push back on US pressure and influence in the region, increasing the risk of unintended conflict.

Monday’s letter is the latest push by Democrats for a return to the 2015 agreement, which has long been opposed by US partners in the region Israel and Saudi Arabia.

The original deal does not bar Iran from developing conventional ballistic missiles, drones or cruise missiles, thus allowing Tehran to continue to develop such weapons.

US officials have accused Iran of transferring such weapons technology to IRGC-backed groups in Yemen, Iraq and Syria. Those transfers have enabled Yemen’s Houthi rebels to launch regular ballistic missile strikes into Saudi Arabia.

Israel has responded to the threat by sending combat aircraft to bomb ostensible Iranian targets in Syria, a quiet campaign for which the Trump administration began covert support in 2018.

Publicly, Iran’s leaders have refused to negotiate over matters outside the scope of the 2015 deal. Biden administration officials have said negotiations over Iran’s ballistic missile program and regional influence campaign should be part of follow-on negotiations.

US officials have approached a return to the Iran deal as a way to de-escalate tensions across the Middle East as the Biden administration seeks to focus its efforts on countering China and Russia’s rising strategic influence.

The Biden administration’s approach toward detente with Tehran has led Saudi Arabia and other Gulf countries to reexamine their rivalry with the Islamic Republic.

Iran’s government confirmed on Monday for the first time that it had held talks with Saudi officials over de-escalating tensions in the region. The two countries are locked in a stalemated proxy war in Yemen that continues to deprive Yemen's population of access to desperately needed humanitarian aid.

Rejoining the 2015 deal “is not only supported by rank-and-file Democrats in red, purple and blue states, but also by our Democratic Party leaders from all across the country," said Yasmine Taeb, a progressive strategist who organized Monday’s letter for the Quincy Institute, a Washington-based think tank that advocates for a more restrained US foreign policy.

A deal could potentially be reached in Vienna “in the next few weeks,” a senior State Department official told reporters last week.

The official put the onus on Iran's leaders to make a "political decision" to return to compliance.