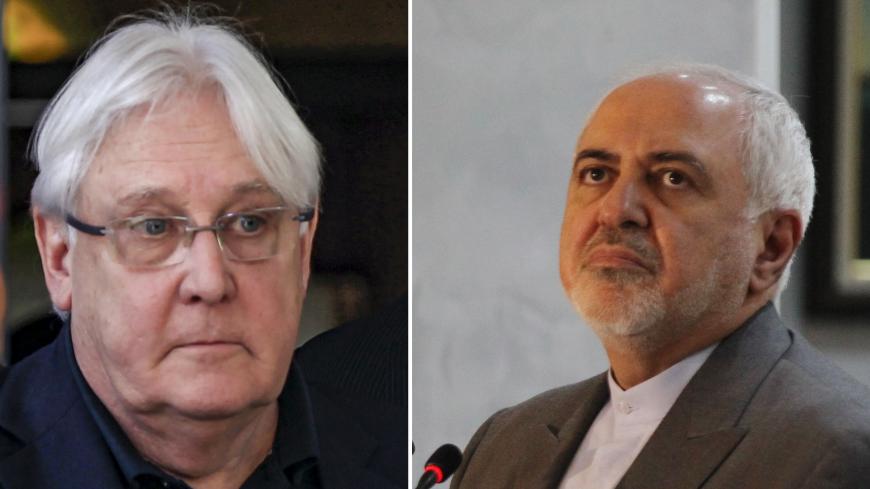 Iran’s Foreign Minister Javad Zarif sat down with United Nations’ lead envoy for the crisis in Yemen, Martin Griffiths, in Tehran on Monday to discuss how to bring about an end to the conflict.

The two “exchanged views on Yemen and how to make progress towards a resumption of the political process,” UN spokesperson Stephane Dujarric said in a statement.

“Mr. Zarif and Mr. Griffiths further discussed the urgent need to make progress towards a nationwide ceasefire, the opening of Sanaa airport and the easing of restrictions on Hodeida ports,” Dujarric said.

The visit by Griffiths, his first to Iran as Yemen envoy, aimed at supporting “a negotiated political solution to the conflict in Yemen that meets the aspirations of the Yemeni people,” the statement read.

During a meeting with European diplomats last week, Yemen’s Prime Minister Maeen Abdulmalik Saeed said the conflict could not end without international pressure on Iran, which has links to Yemen’s Houthi rebels.

Saeed said last week that an attack on Aden’s airport as Yemen’s newly-formed government officials arrived back in the country in December was carried out with ballistic missiles. Yemen’s government has blamed that attack on the Houthis and Iran.

The US government has accused Iran of providing missile technology to the Houthis, who have in turn launched a series of projectile attacks on Saudi Arabia.

Washington called on the Houthis to halt attacks on Saudi Arabia on Monday.

The US administration of President Joe Biden has said Yemen’s six-year civil war must come to an end. Last week, the administration announced it would cease its support for offensive operations in Yemen conducted by the Saudi Arabia-led military coalition against the Houthis.

The US also announced Friday it would end the Trump administration’s terror designation for the Houthi rebels, a label that rights’ groups have said could severely reduce humanitarian aid deliveries to civilians in the conflict.

US President Joseph Biden has said that Iran must return to compliance with 2015 Iran nuclear deal – the Joint Comprehensive Plan of Action, or JCPOA  - before the uS will lift sanctions.

The current US administration also says it will seek to curtail Iran’s proxy influence campaign in the region via follow-on negotiations, though officials in Tehran have shown little interest in engaging on matters outside the original nuclear deal.

The United Nations has said more than 80% of Yemen’s population needs humanitarian assistance, and that the US-backed Saudi-led military campaign against the Houthis has worsened the conflict.