Foreign Minister Mohammad Javad Zarif doubled down on his stance that the United States must relieve sanctions first but suggested the EU could coordinate mutual steps. 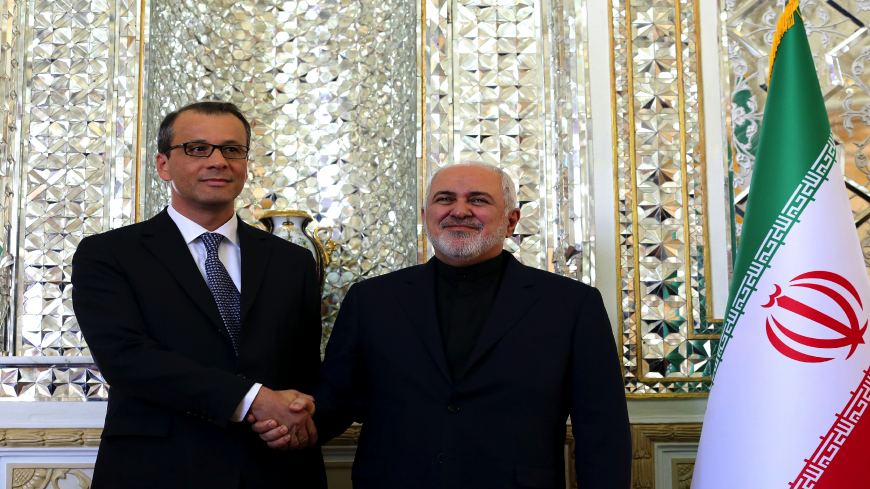 Iran’s top diplomat all but invited on Feb. 1 the European Union to “choreograph” a return of both Iran and the United States to the 2015 nuclear agreement.

“Clearly, there can be a mechanism to synchronize it or coordinate what can be done,” Foreign Minister Mohammad Javad Zarif told CNN. Zarif was responding to a question by interviewer Christiane Amanpour about an apparent early impasse in which both US and Iranian officials have insisted in recent days that the other side must return to compliance with the deal first.

“The JCPOA (Joint Comprehensive Plan of Action) has a mechanism built into the deal. That is the joint commission,” he said, adding that the commission’s coordinator, Josep Borrell, can “choreograph the actions that are needed to be taken by the United States” and Iran.

A spokesperson for Borrell, who is also the EU’s top official on foreign affairs and security policy, did not immediately return Al-Monitor’s request for comment.

Zarif’s statement offered a small glimmer of hope as officials in Washington and Tehran continue to insist the other side must budge first.

President Joe Biden’s recent inauguration has opened the door to Washington’s prospective return to the multinational pact, three years after the Trump administration scuttled the US’ participation in favor of a campaign of economic sanctions aimed at crippling Iran’s ability to develop ballistic missiles and support proxy militias in the region.

In return, Iran began publicly violating its own obligations under the deal, including enriching nuclear fuel well beyond JCPOA-permitted limits in an ostensible effort to pressure Washington to return to the deal.

The United States also accused Iran of backing violent attacks in the Gulf against international shipping and US partner states such as Saudi Arabia in 2019. Tehran denied the charges, even as US and Saudi officials publicly presented evidence that Iranian munitions were used.

Zarif on Feb. 1 doubled down on his government’s position that its ballistic missiles were not up for negotiation amid expected talks about the nuclear issue.

Biden’s national security adviser Jake Sullivan has said Tehran’s conventional ballistic missile program and regional influence campaign must be included in “follow-on” negotiations, though it is not clear how the White House plans to convince Iran to engage in such discussions.

US Secretary of State Antony Blinken has cautioned that a return to bilateral compliance with the JCPOA may take time, but Zarif suggested his government had no interest in waiting.

“The 8,000 pounds of enriched uranium can go back to the previous amount in less than a day. … Some may take a few days or weeks, but it won’t take any longer than it would take the United States to implement executive orders that are necessary to put back Iran’s oil, banking, transportation and other areas that [former] President Trump violated back into operation,” he said.

“The United States needs to come back into compliance, and Iran will be ready immediately to respond,” Zarif said, adding, “The issue is not timing. The issue is whether the new administration wants to follow the failed policies of the Trump administration or not.”

Many observers see a narrow opportunity for a mutual return to the deal, as the term of Iran’s President Hassan Rouhani expires in June. Zarif on Monday reiterated that his government would reduce the access of UN nuclear inspectors in his country if the United States does not relieve sanctions by Feb. 21.

Meanwhile, the Biden administration is seeking to carefully recalibrate its approach to its regional partners, many of whom have hostile rivalries with Tehran. The Israeli military’s chief of staff last week came out against the US return to the agreement, raising the ominous possibility of an Israeli strike against Tehran’s nuclear program if Washington returns to the original deal.

Saudi officials who previously supported Trump’s decision to quit the nuclear deal have said any return must include Riyadh as a party to the pact. France’s President Emmanuel Macron voiced support for the proposal late last week, but it has already been rebuffed by Tehran.

The Biden administration has said it will seek to build on the Trump administration’s initiative to convince Arab leaders to normalize ties with Israel, part of a longer-term US effort to shore up regional defense cooperation to counter the influence of Tehran and potentially China in the Middle East.

Meanwhile, the State Department has frozen a highly controversial sale of 50 advanced F-35 fighter jets and 18 armed drones to the United Arab Emirates, as well as precision munitions to Saudi Arabia for further review. As a candidate, Biden promised to end US support for the two Gulf countries’ involvement in Yemen’s civil war.

“The United States was not willing to discuss these issues when we negotiated the nuclear deal [in 2015]. That is why we agreed to limit the nuclear deal. We paid the price,” he said.