The meeting takes place during the first official visit to Damascus by Saudi Arabia since 2012. 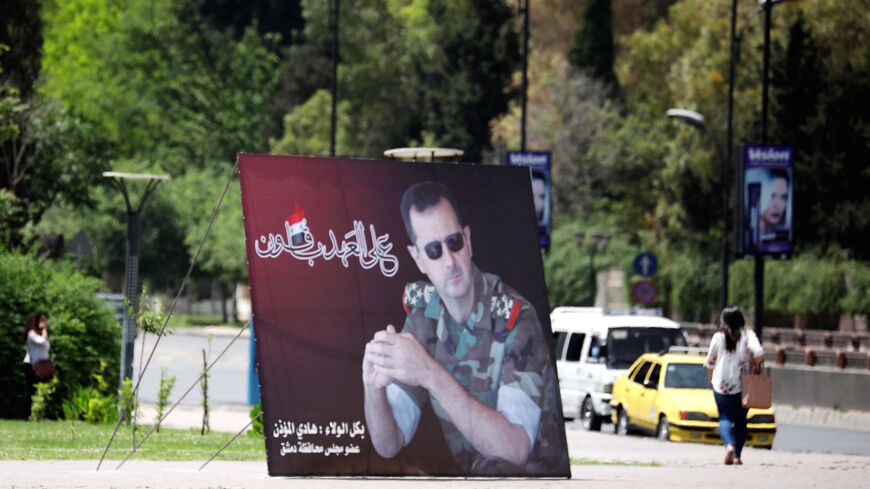 A photo taken on May 3, 2021, shows a giant portrait of President Bashar al-Assad at Umawiyin Square in Syria's capital, Damascus, ahead of this month's presidential elections. - LOUAI BESHARA/AFP via Getty Images

Saudi Arabia’s intelligence chief met with his Syrian counterpart in Damascus on Monday in a sign of possible rapprochement between the two governments a decade after relations were severed.

The Guardian independently confirmed that Humaidan met with Mamluk.

The Saudi visit is the first of its kind since the outbreak of Syria’s civil war in 2012. Egypt and the United Arab Emirates have also signaled interest in restoring ties with the Assad regime in recent months.

Syria was expelled from the Arab League in 2012 over its government’s response to pro-democracy protests across the country. The ensuing decadelong civil war has killed hundreds of thousands of people and displaced roughly half the country’s population.

Riyadh was among the primary financiers of the war’s Islamist rebel opposition. Russia’s military intervention on Assad’s behalf in 2015 turned the tide of the conflict and has left his government in control of roughly half of the country.

Islamist groups remain in control of Idlib province. Syria’s northeast is under the control of Kurdish-led fighters backed by the US-led international coalition to defeat the Islamic State.

The United States spearheaded an international push to economically isolate Bashar al-Assad. In 2018, the administration of President Donald Trump said that US forces would not leave Syria until Assad agrees to free and fair elections in line with United Nations Security Council Resolution 2254.

Syrians head to the polls in June in what international observers widely expect to be a sham election designed as a veneer of legitimacy to Assad’s power.

Meanwhile, US forces and their Kurdish-led partners control a majority of Syria’s oil reserves as part of Washington’s economic campaign against the regime. Israel has covertly sabotaged Iranian petroleum deliveries shipped on credit to Damascus.

The current US administration of President Joe Biden is reviewing its Syria policy. At the same time, Russia, which backs Assad, is on the move. Foreign Minister Sergei Lavrov toured the Middle East in March with stops in Abu Dhabi, Cairo and Riyadh.

The UAE reopened its embassy in Damascus last year, but investment has so far been forestalled, ostensibly by the passage of the Caesar sanctions law in the United States, which allows Washington to sanction any entity doing business with the Assad regime.

A restoration of ties between Assad’s regime and Riyadh would also mark a new step in Saudi Arabia's stance toward Iran.

Tehran has vigorously backed Assad’s regime and moved weapons and Hezbollah fighters across Iraq into war-torn Syria. Those moves, along with arms transfers to Yemen’s Houthi rebels on Saudi Arabia’s southern flank, raised alarm bells in Israel and Riyadh and pushed the Trump administration to enact sweeping sanctions on Tehran and leave US troops in Syria as a bulwark.

Former US officials who worked on the policy have admitted it has no clear endpoint other than denying Assad, Russia and Iran a victory.

The Biden administration is seeking to return to the 2015 nuclear deal with Tehran via ongoing talks in Vienna. Saudi officials have engaged directly with Iranian counterparts in Baghdad in recent months, including on the subject of Syria, according to reports.

US Secretary of State Antony Blinken praised the Saudi-Iranian dialogue during an interview with Financial Times on Monday, but suggested US officials did not directly prompt the talks.