Saudi Arabia's Foreign Ministry says it is premature "to reach any definitive conclusions" about the talks. 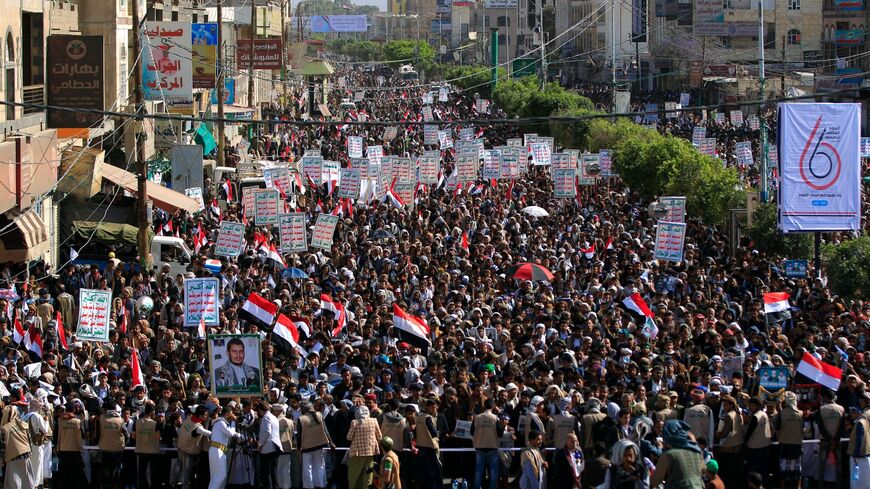 Supporters of Yemen's Houthi rebels attend a rally marking the sixth anniversary of the Saudi-led coalition's intervention in Yemen, in the capital, Sanaa on March 26, 2021. A Saudi-led military coalition entered Yemen in March 2015 with the goal of restoring its "legitimate" government to power after the Houthis and their allies took over Sanaa. - MOHAMMED HUWAIS/AFP via Getty Images

Saudi Arabia’s Foreign Ministry pumped the brakes on speculation over a potential breakthrough in its hostilities with Iran on Friday following reports that the rivals had held talks in Baghdad to ease tensions in the region.

“We hope they prove successful, but it is too early, and premature, to reach any definitive conclusions,” Ambassador Rayed Krimly told Reuters on Friday.

Krimly, the head of policy planning at the Saudi Foreign Ministry in Riyadh, confirmed that his government has held talks with Iranian officials in recent weeks designed to “explore ways to reduce tensions in the region.”

His statement is the latest official confirmation of the talks, first reported by the Financial Times, and acknowledged by Iraqi President Barham Salih this week.

US Secretary of State Antony Blinken told the Financial Times on Monday that the Biden administration did not directly encourage the talks, but praised the development.

“Talking is usually better than the alternative. Does it lead to results? That’s another question,” Blinken said earlier this week.

“But talking, trying to take down tensions, trying to see if there’s a modus vivendi, trying to get countries to take actions on things they’re doing that you don’t like — that’s good, that’s positive,” Blinken said.

The talks have reportedly centered around Yemen, where Iran-backed Houthi rebels have continued to launch Iranian-supplied ballistic missiles and drones across the Saudi border to leverage a favorable outcome to the conflict.

The war mired in stalemate after years of Saudi bombing failed to stop the Houthis’ advance against the Yemeni government of Abed Rabbo Mansour Hadi.

The two countries are also opposed on Syria, where President Bashar al-Assad has prevailed, with Iranian and Russian support, against a massive rebellion, some of which was financed by Riyadh.

Saudi Arabia’s intelligence chief Gen. Khalid al-Humaidan sat down with his Syrian counterpart Ali Mamlouk in Damascus last week in a rare visit since Assad’s ousting from the Arab League in 2012.

Krimly disputed reports of the meeting to Reuters, saying Saudi policy toward Syria remains support for its people and a political solution under United Nations Security Council resolutions — a clear allusion to the US-led international stance on the conflict.

But one former US official speaking not for attribution told Al-Monitor that it wasn’t the first time Humaidan had sought to touch base with the Syrian regime. Reports this week indicated the delegation comes ahead of prospective plans to open a Saudi embassy in Damascus.

In late 2018 the United Arab Emirates opened its embassy in Damascus, but has so far avoided extensive business ties with the Assad regime, which remains under US and international sanction.

Israeli, Saudi and other Gulf leaders have watched with serious concern the expansion of Iran’s reach into Yemen, Iraq and Syria amid those local conflicts.

The failure of the 2015 international nuclear agreement to place firm constraints on Iran’s drone and ballistic and cruise missile development as well as support for regional militias led the Trump administration to abandon the deal in 2018.

Now the Biden administration is seeking to rejoin the agreement amid indirect talks with Tehran in Vienna.