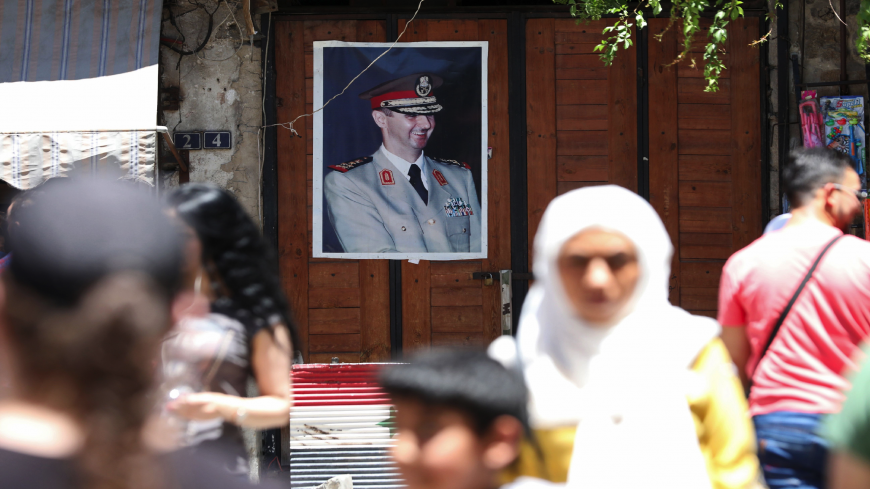 Syrians walk in old Damascus in front of a portrait of Syrian President Bashar al-Assad, on June 16, 2020. The Caesar Syria Civilian Protection Act of 2019, a US law that aims to sanction any person who assists the Syrian government or contributes to the country's reconstruction, is to come into force on June 17. - LOUAI BESHARA/AFP via Getty Images

The United Arab Emirates’ foreign minister called for international cooperation with the government of Syria’s President Bashar al-Assad after years of isolation imposed as a result of Damascus’ conduct in the country’s decadelong civil war.

“We have expressed our opinion frankly to the US,” he said.

Why it matters: The foreign minister’s remarks go against the grain of an international effort led by the United States to economically and politically isolate the Assad regime.

The campaign of US sanctions has been built on well-documented and extensive war crimes committed by the Assad regime against the Syrian people over the last decade.

Militarily backed by Russia and Iran, Assad has retaken control of roughly two-thirds of Syria from rebel factions and Islamist jihadists. But thanks to the war and the continuing US-led international pressure campaign, Assad has inherited a shell of a state in which some 80% of the population lives below the poverty line.

US officials rallied their partners and allies in 2017 to withhold reconstruction aid for Syria destined for areas under Assad’s control.

Despite close ties with the United States, the United Arab Emirates has emerged in recent years as a reluctant participant in Washington’s policy toward Assad. Abu Dhabi reopened its embassy in Damascus in 2018 for the first time since the Arab League suspended Syria in 2011.

US officials have threatened sanctions on those who do business with the Syrian government, which is controlled by Assad’s family and inner circle.

Officials in Washington have insisted that sanctions on Syria will not be relieved until the Assad dictatorship agrees to free and fair elections as called for by UN Security Council Resolution 2254.

Former US Syria envoy James Jeffrey has described the policy in strategic terms, saying it was his job to ensure Russia’s gambit on the Mediterranean turns into a “quagmire.”

What’s next: The UAE and Russia see the US policy as a dead end and are keen to invest in rebuilding Syria.

But the threat of sanctions looms large for the Gulf state, which is counting on the Biden administration to unfreeze an unprecedented proposed sale of 50 highly advanced F-35 fighter jets and armed drones offered by the Trump administration.

Lavrov was also set to discuss Libya, Yemen and Israel, as well as “a wide range of economic sectors, such as power generation, industry, agriculture, infrastructure and peaceful use of space” with Emirati officials, according to state-run Tass News Agency.

The Russian foreign minister heads to Saudi Arabia and Qatar later this week.

Know more: Sebastian Castelier argues that even amid progress toward detente with Qatar, economic competition within the Gulf Cooperation Council is heating up as the COVID-19 pandemic has set back Gulf economies.