Egypt, the United States and France are concentrating effort on a cease-fire as Gaza rockets and Israeli retaliation continue. 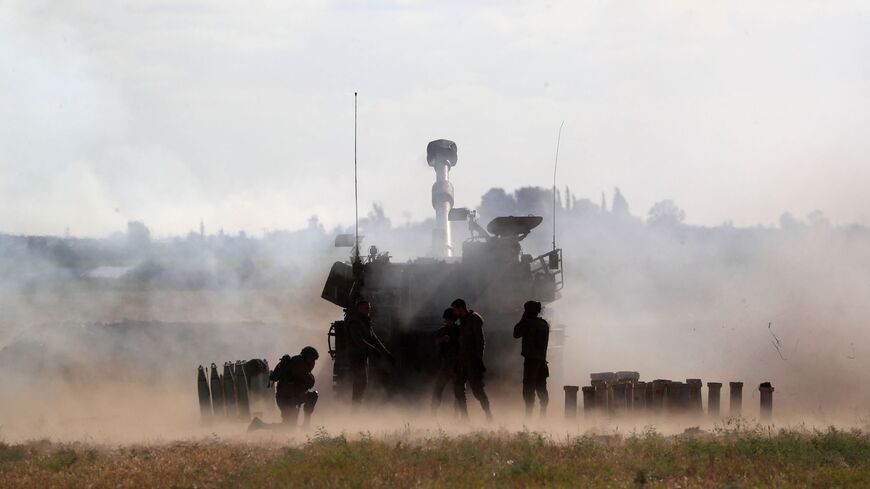 Israeli soldiers fire a 155mm self-propelled howitzer toward the Gaza Strip from their position along the border with the Palestinian enclave, on May 17, 2021. - EMMANUEL DUNAND/AFP via Getty Images

Israel took more barrages from Gaza yesterday and today, with rockets hitting buildings in Ashdod, Ashkelon and Beersheba in the south of the country. The Israel Defense Forces estimated this morning that some 3,150 rockets have been fired from the Gaza Strip at Israeli territory. About 460 of the rockets and mortar shells apparently failed to clear the border and fell inside Gaza territory. In retaliation today, Israeli forces killed senior Palestinian Islamic Jihad commander Hussam Abu Harbeed and continues to target Hamas' tunnel infrastructure.

Prime Minister Benjamin Netanyahu spoke this weekend with Dutch Prime Minister Mark Rutte, who expressed his “unreserved support for Israel’s right to defend itself in light of the rocket fire from Gaza.” Netanyahu also spoke with German Chancellor Angela Merkel. “The chancellor again sharply condemned the continued rocket attacks from Gaza on Israel and assured the prime minister of the German government’s solidarity. She reaffirmed Israel’s right to defend itself against the attacks,” said her spokesperson Steffen Seibert.

The Shavuot holiday today meant no Israeli officials have reacted to talks on a possible cease-fire with Hamas. In fact, all the government's ministers have kept mum on all international efforts to reach a truce between the sides since the beginning of the escalation. Senior Israeli officials emphasize the IDF will continue retaliating until calm and security is restored in Israel’s south and elsewhere in the country. Defense Minister Benny Gantz said today, "Anyone who fires at our citizens is in our crosshairs … Wherever they give rise to terrorism, we will create targets."

Meanwhile, the international community is pushing truce efforts forward. French President Emmanuel Macron met today in Paris with Egyptian President Abdel Fattah al-Sisi on the margins of the international conference supporting the Sudanese transition. The two presidents' meeting reportedly focused on Egyptian mediation efforts for an Israel-Hamas truce. A communique published by the Elysee said the two men highlighted "the absolute necessity to end hostilities," with Macron reiterating his support of the Egyptian mediation efforts. The presidents agreed to continue coordinating efforts to reach a truce.

European Union High Commissioner for Foreign and Security Affairs Josep Borrell said yesterday he would convene a special meeting on the issue, tweeting, "In view of the ongoing escalation between Israel and Palestine and the unacceptable number of civilian casualties, I am convening an extraordinary VTC of the EU Foreign Ministers on Tuesday. We will coordinate and discuss how the EU can best contribute to end the current violence." The UN security Council will convene on Thursday to discuss the escalation.

While Israeli officials abstain from commenting on cease-fire efforts, Israeli analysts estimate that Egypt and the United States are now playing a central role in the talks, with active support from France. On Sunday UN envoy to the region Tor Wennesland was reportedly in contact with Israel’s national security adviser Meir Ben-Shabbat and other senior Israeli security officials as well as Hamas and Egyptian intelligence officials. Like the other Israeli officials, Ben-Shabbat did not publicly comment on the meeting.