Two Lebanese were injured from Israeli shelling and Lebanese forces worked to stop the protesters from advancing farther. 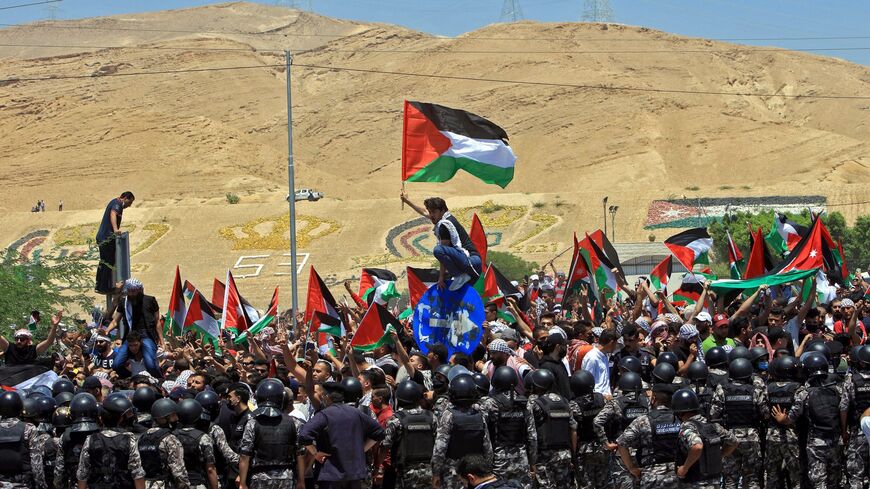 Protesters in Jordan and Lebanon stormed toward their borders with Israel on Friday in response to the ongoing conflict in Israel and the Palestinian territories.

A viral video on social media showed hundreds of Jordanians running toward the King Hussein Bridge, which connects the Hashemite Kingdom to Israel. Jordanian police later said that “activity” in Shuna, which is close to the bridge, ended without issue. The participants cooperated with police and first responders gave them water due to the high temperature, according to a police statement.

A group of Lebanese men also attempted to enter the Israeli town of Metula. Two were injured when Israeli shells landed near them. Lebanese security forces also responded to prevent them from advancing, the official National News Agency reported. A widely viewed video showed some of the men holding Hezbollah flags.

The marches to the border were in response to the conflict taking place throughout Israel and the Palestinian territories. Israel and Hamas in the Gaza Strip are exchanging fire. There is also communal violence happening between Jews and Arabs within Israel. In the West Bank, Israeli troops shot and killed a Palestinian man Friday after an alleged car-ramming attack as protests continue. The conflict erupted earlier this week over tensions in Jerusalem, including over the Temple Mount and the possible eviction of some Palestinian families from the Sheikh Jarrah neighborhood.

Support for the Palestinian cause is high in both Jordan and Lebanon. A large percentage of Jordan’s population consists of Palestinian refugees from the 1948 Arab-Israeli war and their descendants. Jordanians demonstrated in solidarity with Palestine in several cities this week.